A research team from Pepperdine University led by Angela Hawken has released the findings of a survey of Syrian public opinion which reveals widespread dissatisfaction with the status quo. The survey involved 1046 in-person interviews carried out in January-February 2010 without the approval of the Syrian government, with an attempt to achieve a geographic and demographic representative sample. There are many problems with surveying public opinion in authoritarian societies, including the difficulty of getting accurate samples and the fear among respondents of answering honestly. 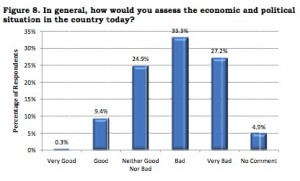 With all appropriate caveats, here are some of the interesting findings:

The full survey can be downloaded from Pepperdine University here.