High school and university students in the Arab world are extremely savvy consumers of the internet, according to a new survey published by Jad Melki of the American University of Beirut, but more use it for fun and social relationships than for politics and most are alarmingly trusting of the new media and have little concern about privacy or surveillance issues. The pilot survey of 2744 students in Jordan, Lebanon and the UAE found far less production of new media content than consumption, with almost 80% saying that they never blogged (and almost 70% of those who did said they primarily blogged about music and entertainment). While TV remains king for news, nearly 50% say that they receive news from online social networks, SMS and email (fewer than 20% say they get news from blogs). As for political impact, less than 10% said they used the internet for political activism, but over 40% reported using it to express their opinions. Only a minority felt that the internet helped them gain political power (30%) or to influence the government (35%), but 82% agreed that the internet helped them to express their opinions. 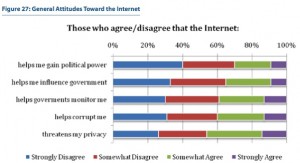