Why do some oil-rich rentier states manage to create succesful state-owned enterprises when so many similar states fall prey to the “resource curse?” In the April 2010 issue of World Politics, Steffen Hertog argues that SOEs in the Gulf enjoyed certain advantages which allowed them to avoid the “monumental white elephants” so characteristic of other resource-rich states such as Algeria, Indonesia, Iran, Libya, Nigeria and Venezuala. His answer may be disconcerting: the Gulf states succeeded in standing up such successful state-owned enterprises, he concludes, in part because they had a market-oriented management insulated from political pressure and responsive only to a limited and coherent set of high-level regime elites. The absence of a populist-mobilizational history and the autonomy of regime leadership from interest groups within state and society, he argues, allowed Saudi Arabia, Qatar and the UAE to escape at least that part of the resource curse. Hertog focuses only on the economic performance of the public sector, not on broader questions of governance, but his case for the effectiveness of state-owned enterprises insulated from political pressure and controlled by a small number of elites will challenge assumptions about the pathways to development and the prospects of democratization. 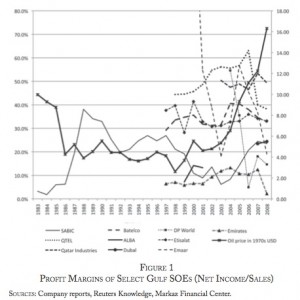 Abstract: The article explains how several Gulf rentier monarchies have managed to create highly profitable and well-managed state-owned enterprises (SOEs), confounding expectations of both general SOE inefficiency and the particularly poor quality of rentier public sectors. It argues that a combination of two factors explains the outcome: the absence of a populist-mobilizational history and substantive regime autonomy in economic policy-making. The author concludes that it is necessary to rethink the commonly accepted generalizations both about rentier states and, arguably, about public sectors in the developing world.