Can insights from the life sciences contribute to a better understanding of why suicide terrorism is carried out by Islamic fundamentalists? Bradley A. Thayer and Valerie M. Hudson argue yes in “Sex and the Shaheed: Insights from 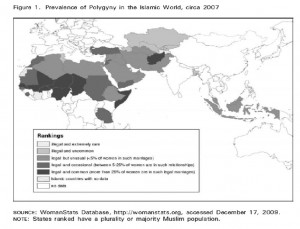 the Life Sciences on Islamic Suicide Terrorism.” In this 2010 article in International Security, Thayer and Hudson argue that combining wisdom from the evolutionary sciences with that of the social sciences can lead to a more complete explanation of suicide terrorism than that provided by conventional approaches alone.

The desire to improve one’s chances of reproductive success can lead to suicide terrorism in resource-scarce societies, Thayer and Hudson argue. In such societies, males who are not the alpha-male, or group leader, can use violence to try to re-organize the social hierarchy and improve their chances to find a mate. At the same time, an alpha-male has the most incentive to encourage violence to be directed at those outside the group to preserve his own dominance. In this context, encouraging suicide terrorism can be a prudent strategy.

This is compounded, Thayer and Hudson argue, with high levels of gender differentiation within Muslim societies. In societies with high levels of gender differentiation, men are more likely to be worried about emasculation and may turn to suicide terrorism to demonstrate their strength. Thayer and Hudson argue that men in these societies are also subject to humiliation at the hands of Western powers which may encourage them to use terrorism as well. Moreover, the authors argue that polygyny in Muslim societies leads to a scarcity of women, and that marriage is expensive in the Middle East. Thus, men may feel that their best ability to bring honor for, and financial success to, their family is through suicide terrorism.

Thayer and Hudson suggest policy prescriptions based on their argument. In addition to more conventional policy prescriptions for reducing terrorism, such as promoting democracy in the Middle East, the authors argue that women’s rights should be promoted and that Middle Eastern governments should take steps to make marriage more affordable. Additionally, they argue that propaganda should be used that challenges the message conveyed by terrorist groups that an individual can provide for his family through terrorism.

Thayer and Hudson also argue that this approach of combining the life sciences with the social sciences calls for different types of data collection, such as on dowry costs, which otherwise might not be of interest to social scientists.

Download “Sex and the Shaheed: Insights from the Life Sciences on Islamic Suicide Terrorism” from International Security if your university has access here or email info@pomeps.org for assistance. A response by Mia Bloom to this article, and a further response by Thayer and Hudson, is covered here on POMEPS.