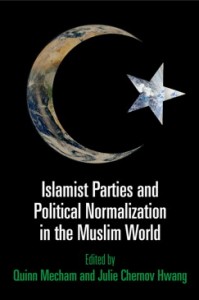 Updated: POMEPS is especially pleased to announce that Quinn Mecham and Julie Chernov Hwang have a new edited volume Islamist Parties and Political Normalization in the Muslim World (University of Pennsylvania Press). In August 2010 POMEPS hosted a book development workshop that led in part to the development of this volume. In Islamist Parties and Political Normalization contributors examine six major cases of “Islamist party evolution and participation in democratic and semidemocratic systems” in the Middle East and Asia. The contributors find a general tendency in Islamist politics: “Although Islamist parties represent diverse interests and behaviors that are tied to their particular domestic contexts, through repeated elections they often come to operate less as antiestablishment parties and more in line with the political norms of the regimes in which they compete.”

Mecham is an assistant professor of political science at Brigham Young University. He has been a frequent contributor to POMEPS and the Middle East Channel. His articles include “The AKP’s accountability problem” (June 7, 2013), which appeared in POMEPS Briefings 23 Turkey’s Turmoil, and “Erbakan’s unintended legacy” (March 1, 2011). Hwang is an associate professor of political science and international relations at Goucher College.