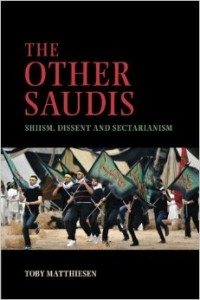 POMEPS congratulates Toby Matthiesen on the release of his second book, The Other Saudis: Shiism, Dissent and Sectarianism. Utilizing little-known Arabic sources, extensive fieldwork in Saudi Arabia, and interviews with activists, Matthiesen traces the politics of the Shiites in Saudi Arabia’s Eastern Province and casts new light on Shiite political mobilization. The Other Saudis is adapted from Matthiesen’s PhD dissertation “The Shia of Saudi Arabia: Identity Politics, Sectarianism, and the State,” which won the American Political Science Association’s 2012 Aaron Wildavsky Award for the Best Dissertation on Religion and Politics.

Matthiesen is a research fellow at Pembroke College, The University of Cambridge. He is the author of Sectarian Gulf: Bahrain, Saudi Arabia, and the Arab Spring that Wasn’t (Stanford University Press, 2013), which he discusses with POMEPS Director Marc Lynch in POMEPS Conversations 28 (watch here). He has been a frequent contributor to POMEPS for The Middle East Channel and Monkey Cage. Read Matthiesen’s most recent Monkey Cage article “Sectarianism comes back to bite Saudi Arabia,” and don’t miss his essay “Elite fragmentation and securitization in Bahrain” in POMEPS Studies 11 “The Arab Thermidor: The Resurgence of the Security State.”

In/around New York City? Matthiesen will be discussing The Other Saudis at Columbia University on March 9, 2015. In addition he will be speaking on sectarianism in the Gulf for the “Divided Societies, Volatile State: The Politics of Identity Post-Arab Spring” conference at Rice University’s Baker Institute in Houston, Texas, March 10, 2015.