The exclusive nature of the Oslo Accords may have had long-term deleterious effects on the development of a robust civil society in the Palestinian territories. This is one of the key insights in Manal A. Jamal’s “Democracy Promotion, Civil Society Building, and the Primacy of Politics,” in Comparative Political Studies. She claims that post-conflict civil society may be most effective when negotiated settlements are inclusive and enjoy broad societal supported. In a study that compares the effect of donor assistance on civil society development in the Palestinian territories and El Salvador between 1992-2001, Jamal finds compelling evidence that the exclusive nature of the PLO-negotiated Oslo Accords, in conjunction with limited societal support, stymied the development of horizontal linkages across civil society organizations in the Palestinian territories. El Salvador’s 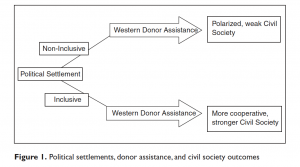 “negotiated revolution”, by contrast, enjoyed high levels of popular support and relative inclusivity, contributing to a robust cross-cutting civil society which ultimately “entailed the institutionalization of productive patterns of engagement with local government.” These divergent outcomes, she argues, have had significant effects on levels of social capital needed for democratization.

Jamal’s article builds on a strong tradition that deems political settlements to be central in shaping subsequent civil society developments. She contributes to this literature by specifically addressing Western donor civil society building and broader efforts at democracy promotion. In exclusive peace settlements with limited public support “Western donor assistance will minimize cooperation, exacerbate political polarization, and weaken civil society by promoting favored groups over others” while inclusive agreements lead to a more cooperative and vigorous civil society. One of the more compelling aspects of Jamal’s article is the lens through which she analyzes civil society development in the two cases. She uses the transformation of the women’s sector as a proxy for civil society development and democracy promotion, assessing variation in Western aid and the development of the women’s sector in the Palestinians territories and El Salvador. She finds that Western aid of women’s groups in the Palestinian territories was implicitly and explicitly discriminatory in the post-Oslo era, transforming collective struggles into individual cases, and promoting organizations and individuals that buttressed ideas and norms associated with the peace process. This led to a fragmented civil society and entrenched clientelistic networks. The inclusive nature of the political settlement in El Salvador, on the other hand, meant that Western donor programs supported women’s groups engaged in economic development and ultimately encouraged “the institutionalization of regular patterns of interaction with local government.” Jamal’s study is an important cross-regional contribution to literature on the politics of aid and post-conflict development of civil society.

Download “Democracy Promotion, Civil Society Building, and the Primacy of Politics” from Comparative Political Studies if your university has access here, or email info@pomeps.org for assistance.