Petrostates are more likely than other states to engage in militarized interstate disputes (MIDs). What explains this correlation? In the fall 2010 issue of International Organization, Jeff Colgan challenges the conventional notion that 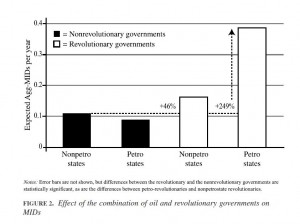 petrostates are targeted by other countries and that these MIDs are defensive conflicts. Instead, in “Oil and Revolutionary Governments: Fuel for International Conflict,” Colgan argues that petrostates, and in specific revolutionary petrostates, are more likely to be the creators of these disputes.

Colgan demonstrates that revolutionary petrostates are more than three times more likely to start a MID than other states and explains why this is so. Petrostates are able to engage in aggressive foreign policies with fewer risks than other states because of their vast resources. Revolutionary governments are more likely than non-revolutionary governments to pursue these aggressive policies both because of the characteristics of their leaders and because of the removal of domestic political institutions that might otherwise check these moves. Colgan argues that the presence of oil without a revolutionary government does not lead to war; in other words, capacity to begin conflict without will to do so does not cause conflict. This may be because petrostates have an incentive to remain engaged in the international economy and thus, in non-revolutionary states, this desire may outweigh the incentives to create conflict.

The most empirical evidence of Colgan’s theory occurs in the Middle East, but Colgan cautions that this is because the Middle East has more petrostates than any other region not because of Middle East exceptionalism. To that end, Colgan argues that the mechanisms he describes seem to apply outside the Middle East as well. Additionally, his theory explains variation in conflict across the Middle East by explaining why some countries in the region are particularly likely to start conflicts while others are not.

Colgan makes key contributions with this article. He demonstrates that the conventional wisdom about the connection between oil states and conflict is not sufficient to understand the origins of much of this conflict. In particular, Colgan demonstrates the importance of examining the domestic politics of the countries under question, arguing that it is the type of government – in specific, revolutionary government – that is most central to explaining when petrostates will begin militarized conflicts.

Download “Oil and Revolutionary Governments: Fuel for International Conflict” from International Organization if your university has access here, or email info@pomeps.org for assistance.