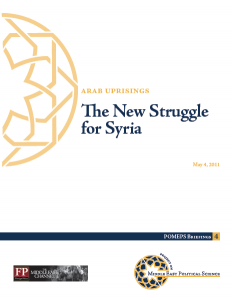 The New Struggle for Syria

POMEPS Briefing 4 – May 5, 2011
As the Bashar al-Assad regime continues its crackdown on protests across the country, the international community grows increasingly concerned about the developing crisis inside Syria. Human rights groups say the regime’s crackdown has left more than 500 Syrians dead since demonstrations began in March, while U.S. and EU officials debate a new round of economic sanctions. POMEPS’ latest briefing — “The New Struggle for Syria” is a collection of top-notch analysis from a variety of angles and prospectives, originally published on Foreign Policy’s Middle East Channel. The series includes analysis on Syria’s military, domestic and political dynamics — as well as prospectives as seen from key regional actors.

In this week's podcast: @abuaardvark chats w/ Nicholas Danforth about his book, The Remaking of Republican Turkey: Memory and Modernity since the Fall of the Ottoman Empire. Also: short segments w/ Lucy Abbott and Vincent Keating & Kristian Ulrichsen!
https://pomeps.org/the-remaking-of-republican-turkey-entrusted-norms-and-gcc-reconciliation-s-11-ep-7

TODAY is the LAST DAY to submit a proposal for the Travel–Research–Engagement (TRE) grants for 2022! Awards of up to $3,000 will be offered to support research travel to the broader Middle East in support of academic research projects. More info here: https://pomeps.org/call-for-proposals-2022-travel-research-engagement-grants

TODAY is the LAST DAY to apply for the POMEPS Environmental Politics, Climate Change, & Conflict in the MENA Workshop! Scholars at all career stages are invited to apply. More information available here: https://pomeps.org/call-for-proposals-environmental-politics-climate-change-conflict-in-the-mena

In this week's podcast: @abuaardvark chats w/
Raphael Lefevre about his latest book, Jihad in the City. Also: short segments w/ Sarah Parkinson on ethics in violence-adjacent research & Mohamed Daadaoui on Morocco's election and the PJD. Check it out! https://pomeps.org/jihad-in-the-city-discourtesy-bias-and-moroccos-election-s-11-ep-6

The Remaking of Republican Turkey, Entrusted Norms, and the GCC Reconciliation (S. 11, Ep. 7)