Successful negotiations to end civil strife are likely directly correlated with levels of inclusivity in the negotiations process. In other words, “peace process exclusivity, that is negotiations between only some of the potential parties to a conflict, is more likely to generate spoiler violence, whereas a more inclusive peace process reduces incentives for the strategic use of spoiler violence.” So argue Lisa Blaydes (Stanford University) and Jennifer De Maio (California State University) in “Spoiling the Peace? Peace Process Exclusivity and Political Violence in North-Central Africa,” published in the March-June 2010 issue of Civil Wars. Drawing from the rich body of literature on spoiler dynamics, the authors compare variation in levels of violence in the peace processes of Sudan, Mali, and the Western Sahara. They find compelling evidence that the exclusive nature of the Intergovernmental Authority on Development (IGAD)-led efforts at peace in 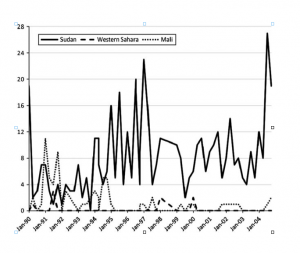 Sudan created incentives for spoiler violence in Darfur, the south and the eastern front, whereas the relatively more inclusive UN-led negotiations between the Polisario Front and the Moroccan government in Western Sahara lowered the pay-offs for potential spoilers there. Mali provides further evidence through variation over time; early bilateral negotiations encouraged violent insurgency while later UN and Norwegian-led negotiations succeeded in bringing hostilities to an end. The article is a valuable contribution to both bargaining and spoiler literature, drawing on cases with similar socio-economic characteristics yet divergent outcomes in terms of levels of violence throughout their respective peace processes. Central to their argument is that the number and quality of parties to a conflict is endogenous to the peace process; negotiations often include provisions for incorporation of former rebels into the political and security organs of the post-conflict regime—where rebels are excluded from negotiations, they face the reality of being obsolete post-transition. This dynamic generates incentives for excluded parties to spoil the peace, in effect leveraging mediators to offer them a place at the negotiating table. Because reaching an agreement between warring parties is a complicated task, Blaydes and Maio make a compelling case that “there is a real-world trade-off between the ability to reach an agreement and the sustainability of that agreement over time.” The article generates important insights for the academic and policy world engaged in finding practical solutions to protracted conflicts where spoilers dictate the terms of negotiations.

Download “Spoiling the Peace? Peace Process Exclusivity and Political Violence in North-Central Africa” from Civil Wars if your university has access here or contact POMEPS for help.