Is natural resource wealth a blessing or a curse? Stephen Haber and Victor Menaldo argue that the resource curse may actually be better termed the resource blessing in a February 2011 article in the American Political Science Review entitled “Do Natural 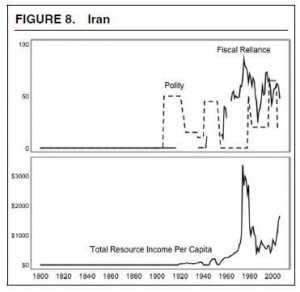 Resources Fuel Authoritarianism? A Reappraisal of the Resource Curse.”

Haber and Menaldo challenge much of the existing literature on regime type and resource reliance. Much of the literature argues that governmental reliance on natural resources is detrimental. It fosters and sustains authoritarianism by providing resources for a government without taxation of, and thus accountability to, its citizens. Reliance on natural resources is also correlated with lower economic growth and civil wars.

Haber and Menaldo find no evidence of a resource curse. Instead, they find some evidence of a resource blessing. In one test, Haber and Menaldo examined 53 resource-reliant countries and found that high levels of resource-reliance were correlated with higher levels of democracy. For example, Haber and Menaldo argue that Algeria and Iran became more democratic when those countries were more reliant on natural resources. The Shah came to power when Iran had few natural resources, and Iranians mobilized to overthrow the Shah in the 1970s when reliance on oil was at a peak.

This article is an important read for those striving to understand the relationship of natural resource wealth and regime type, in the Middle East and beyond.

Download “Do Natural Resources Fuel Authoritarianism? A Reappraisal of the Resource Curse,” from the American Political Science Review if your university has access here or email info@pomeps.org for assistance.