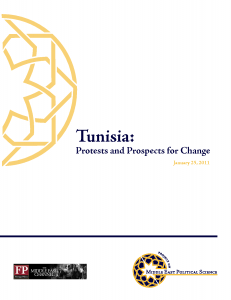 Tunisia: Protests and Prospects for Change

Protests broke out in Tunisia on December 17 and have only continued to escalate. The demonstrations have captured the attention of the entire Arab world, and raised both fears of and hopes for political change. Why did the demonstrations erupt, and where will they lead? How will they affect the rest of the Arab world? What should the Obama administration do?

An event with political scientists Christopher Alexander and John P. Entelis on January 25th at the George Washington University’s Elliot School of International Affairs explored these issues and those discussed in this briefing.

Video of this event is available at: http://media.elliott.gwu.edu/video/199

"Are civil society and media in the MENA taking precautions to secure themselves against cyber attack?" Read about this in Alexei Abrahams' piece, "The Web (In)Security of MENA Civil Society and Media" https://pomeps.org/the-web-insecurity-of-mena-civil-society-and-media

POMEPS, The Center for Democracy, Development and the Rule of Law, and The Global Digital Policy Incubator are thrilled to announce POMEPS Studies 43: Digital Activism and Authoritarian Adaptation in the Middle East. Download the full PDF here! https://pomeps.org/pomeps-studies-43-digital-activism-and-authoritarian-adaptation-in-the-middle-east