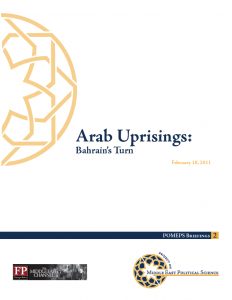 As news of Bahrain’s turmoil continues to develop, many wonder where the country’s crisis is headed. Violence is now being used against peaceful protesters as protests enter their fifth day, and Bahrain’s ruling family orders its army to turn on demonstrators. POMEPS and Foreign Policy’s Middle East Channel have produced a wide range of high quality analysis over the past year on Bahrain. As part of POMEPS’ recently launched Briefing series, a PDF is now available which highlights some of the Middle East Channel‘s best work on this small country which has recently rocked the Gulf.