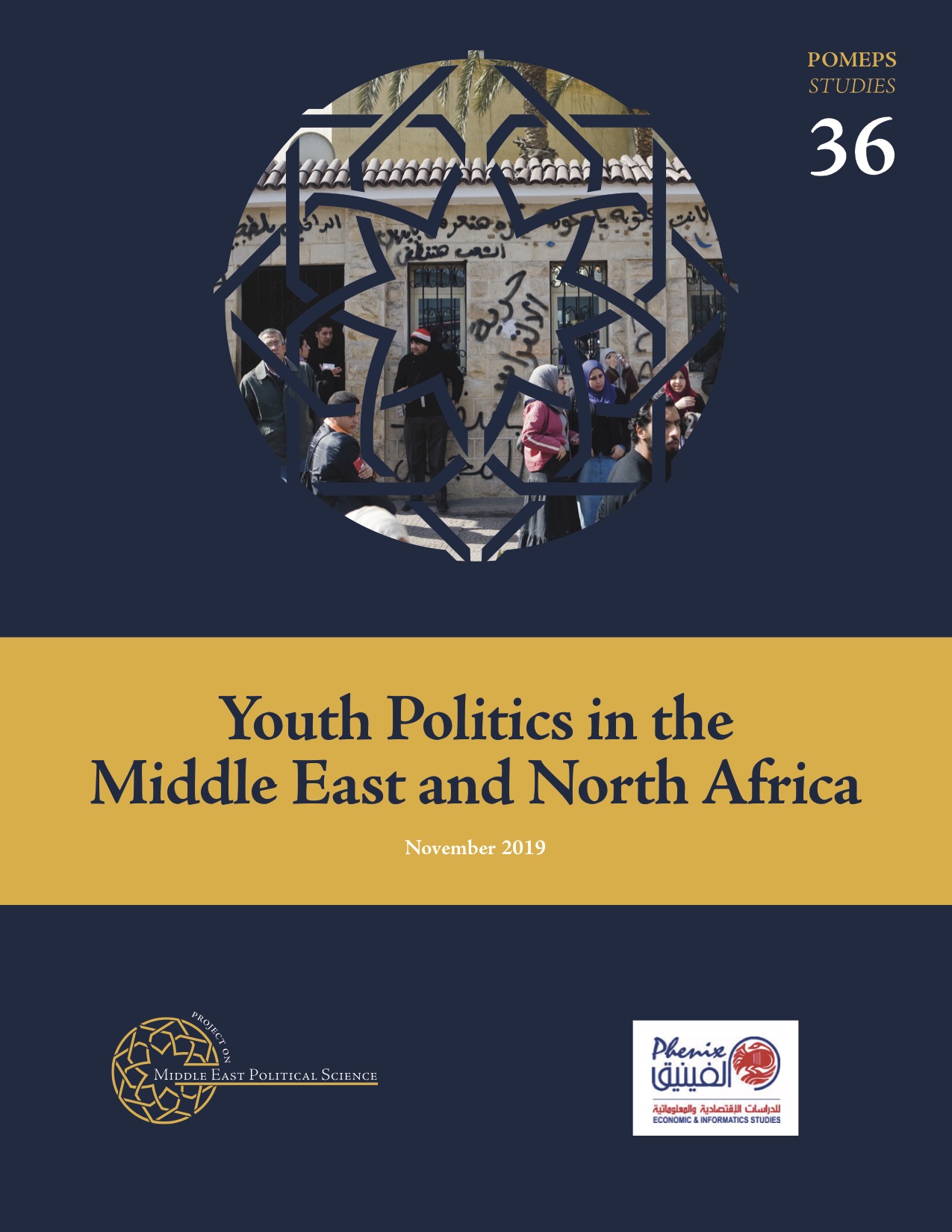 This is part of POMEPS Studies 36: Youth Politics in the Middle East and North Africa. Download the full PDF here.

In Turkey, 86 percent of women experience gender-based violence over the course of their life.[2] And every year, 11 percent of Turkish women report experiencing physical and/or sexual intimate partner violence.[3] Perhaps, then, the fact that the number of women who are murdered by a relative or partner has increased dramatically in recent years is not surprising. In 2018, the Istanbul-based We Will Stop Femicide Platform recorded 395 women murdered in such circumstances; in 2009, the number was 121.[4] These statistics from the platform are some of the most reliable available.[5] The government ceased releasing an official count of the number of murdered women in 2010.[6] This is likely because, according the government’s own statistics, between 2002 (when the ruling party came to power) and 2009 (the last year for which government statistics are available), the number of women murdered by men increased 1400 percent.[7]

In 2014, in the midst of this increase in violence, a group of young female college students formed the Kampüs Cadıları (Campus Witches). The group’s members often dress as witches, wearing hats and capes, and sometimes attacking men accused of perpetrating sexual assault. Their actions are an adamant call for change due to the severity of women’s situation. The Witches explain:

We deliberately decided to call ourselves witches because, in the Middle Ages, women who fought the patriarchy and its scientific discourse that rejected the legitimacy of nature were treated as witches…[t]oday’s patriarchal mentality, which denies the value of women and relegates them to the background, is not fundamentally different from the mentality of the Middle Ages, when women rebelled against the patriarchy and were burned alive for their trouble. We are continuing in this resistance, like the great-great-great-great-granddaughters of the witches they failed to weed out back in the day.[8]

The Witches and others term the dramatic increase in the murders of women a “femicide.”[9] The increase has coincided with Turkey’s weakening democratic institutions. Kirisçi and Sloat synthesize the myriad of ways democratic institutions have been dismantled under the ruling political party, the AKP, and Recep Tayyip Erdoğan, the party’s leader: increased presidential power, divisions among the opposition, increased lack of confidence in the integrity of elections—in the rules that govern campaigning and in ballot box integrity, through declining rule of law, and in the desire for “big men” political leaders, all of which have occurred amidst difficult conditions for democracy, including renewed conflict in the Middle East, stalled European Union accession, and the 2016 failed coup attempt.[10] Academics and think tanks have profiled the decline.[11]

Zaki and Alhamid explain how weakened states can lead to gender violence.[12] They argue that “the domestication of the public sphere, ” which occurs as the norms that govern the public sphere break result in private sphere norms extending into the public sphere.[13] Zaki and Alhamid argue this is what caused the increase in sexual violence in Egypt during and after the 2011 Tahrir Square protests.[14] Looking at Turkey, Temelkuran discusses how, as part of a democratic decline, state leaders can both allow the erosion of institutions and focus on remaking what constitutes the ideal woman by overriding the previous regime’s ideal.[15] This is not to say that prior to the AKP, Turkish men and women were similarly positioned. Republican politicians wanted women who appreciated the political enfranchisement the state had granted women while being subservient to men at home. Turkey proves a worthwhile case study for the claims concerning women, sexual violence, and weakening democratic institutions.

Scholars note that the rhetoric of the ruling party’s elites’ does not support women’s rights.[16] Erdoğan does not emphasize the importance of political rights or political participation for women. Instead, he emphasizes the importance of motherhood, calling on Turkish women to have at least three children.[17] He has also called to limit abortion access, declared birth control “treason”, and proposed legalizing child brides.[18] Bülent Arınç, an AKP member who served as Deputy Prime Minister under Erdoğan, stated that women should not laugh in public.[19] Such statements clearly strive to establish a new model for women in public: quiet, docile mothers.

As the AKP has undertaken trying to reshape women in the public sphere, it has also weakened women’s position in the private sphere. Turkish law provides for the protection of women under threat of violence and the prosecution of individuals that perpetuate violence. But state institutions fail to carry out these laws. Police and prosecutors often ignore women’s complaints of assault, instruct women to return to abusive husbands, or reveal the whereabouts of women who have gone to shelters.[20] And when perpetrators are prosecuted for violence against women, there is a “culture of impunity and leniency,” especially for husbands who claim their wives “provoked” them.[21]

It is these dangers that women face in the private sphere that resulted in the Witches’ actions in public. The ineffectiveness of politicians, bureaucrats, and the criminal justice system in holding the perpetrators of sexual violence against women accountable left women with few options. In addition to the attacks on men, the Witches put on self-defense seminars, participate in demonstrations for women’s rights, and write and publish the magazine Feminerva.

In five years, the group, which has a centralized leadership, has grown to have chapters on over 30 university campuses across the country. The Witches have diverse ethnic origins—Turkish, Kurdish, Azeri, etc—and are from different economic strata. Some wear the headscarf, and many do not. Ten years ago, ethnic identities and religious differences kept most women’s groups from working together, but today, the mobilization of people from different backgrounds to bring an end to around violence against women is possible. In their cross-ideological mobilization, the Witches show similarities to the groups profiled by El-Sharnouby and others in this volume.[22]

The Witches’ work also includes protests to put pressure on the government to act in specific cases of violence against women. For example, posts highlight the case of Şule Çet, a young female college student whose fall off a building in Ankara was originally labelled a suicide, but after pressure from the public, the government began investigating it as a murder. The Witches want to make sure the case continues to be investigated as a murder, and put out the following message on Instagram before a key hearing in the case in May 2019:

The idea that the murders of women are not just a criminal justice issue, but also a political issue, is another prominent theme of the group’s posts. For example, another reads:

How do you get guns into a university where private security is everywhere? The murders of women are political!”[24]

The Witches make it clear that this femicide’s causes are not part of private sexual acts or the mental health issues of “insane” men.  Rather, the Witches problematize that these incidents are interconnected and stem from government institutions’ lack of action to ensure laws are carried out. In an effort to remedy such government failures, the Witches campaigned for women to vote “No” in the April 16, 2017 Presidential System Referendum, which enhanced Erdoğan and the AKP’s power. When the referendum passed amid allegations of vote manipulation, the Witches encouraged people to protests.[25]

The Witches’ messages were also explicitly political during June 2018 Parliamentary and Presidential elections. For example, the day before the elections, the group posted a clip from a news program during which a woman explained:

“‘They kicked us off the bus because we were wearing shorts. They said that I did not have the right to wear shorts’ –Woman

These posts remind women that the physical restrictions in the private and the public that are placed on their bodies result from government’s inaction, and that women, consequently, should not vote for the ruling party. The posts neither state nor insinuate which of the opposition parties women should vote for—each just points out that the problems women experience in their private lives are, in part, due to the ruling party.

As Uzun discusses, the government has been largely successful in fostering political disengagement among many youth whose views do not align with the AKP’s.[27] The government has also been very successful in recasting the ideal woman to be quiet and apolitical. The Witches challenge this model, often by being visible and loud in public demonstrations. When the Witches protest—online or in person—they call out the government for its responsibility for both the murders of women and for the Turkish state’s inability to stop these murders.  In doing so, the Witches rally against a system where the state’s failure means women do not have access to recourse for problems they experience in private while also being marginalized in public.

The head of the Federation of Women’s Associations of Turkey, Canan Güllü, states, “The reason for the violence increasing is that the judiciary and security forces are not using the available mechanisms [to prevent and punish violence against women].”[28] It is possible that by highlighting the failure of state institutions, young women can apply pressure to the government to enforce the laws that penalize perpetrators—and perhaps also cool the climate that perpetuates this violence. However, to do means highlighting the weakness of the state’s institutions—and means they risk the state trying to silence them. Perhaps one way the Witches can mitigate this is to partner with other young people’s movements across Turkey, further bridging the ideological divides among young Turks. If the Witches can gain additional strength through even greater numbers of male and female supporters of diverse identities and ideological backgrounds, they can end violence against women.

[1] Kampüs Cadıları. “Her gün en az 5 kadın erkekler tarafından öldürülüyor.” Instagram, June 23, 2018. Accessed June 23, 2018. https://www.instagram.com/ p/BkYIFashbSa/?utm_source=ig_web_copy_link.  Note: throughout this writing, text that is in italics only indicates it was part of the photos or visual montage; text that is both italicized and in bold indicates it was a caption. Author’s translations.

[8] Fern Van, “They are Right to be Afraid: This is Only the Beginning.” Caravan Feminista, Accessed April 6, 2017. http://caravanafeminista.net/theyre-right-to-be-afraid-this-is-only-the-beginning/.

International Leverage and Democratic Backsliding in a Hybrid Regime.” Mediterranean

[14] Hind Zaki & Dalia Alhamid,”Women as Fair Game in the Public Square: A Critical Introduction for Understanding Sexual Violence and Methods of Resistance.”

[16] Feride Acar & Gülbanu Altunok, “The ‘Politics of the Intimate’ at the Intersection of Neo-Liberalism and Neo Conservatism in Contemporary Turkey.” Women’s Studies International Forum 41 (2013): 14-23; Kursat Cınar & Tekin Köse, “The Determinants of Women’s Empowerment in Turkey: A Multilevel Analysis.” Southern European Society and Politics 23 (2018): 365-386.

[20] “He Loves You, He Beats You: Family Violence in Turkey and Access to Protection.” Human Rights Watch. Accessed March 18, 2017.  https://www.hrw.org/sites/default/files/reports/ turkey0511webwcover.pdf.

[21] Elif Sarı, “In Memory of Özgecan Aslan: Sexual Violence and the Juridical System in Turkey.”

[22] See Dina El-Sharnouby, “From Seizing Power to Sharing Power: Youth Politics in light of the 2011 Egyptian and 2018 Sudanese Uprisings,” this volume.