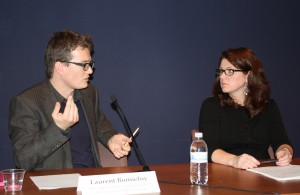 Moderator Marc Lynch began the event with a question: Why does Yemen attract so little attention? The panelists sought to answer this question and address the current state of popular resistance in Yemen.

Sheila Carapico began the afternoon by talking about the institutional implications of the ongoing transition in Yemen with the departure of President Ali Abdullah Saleh. She argued that civil society is quite vibrant in Yemen, but governance is in fact weak and getting weaker. For the last few decades, the military has been acting beyond constitutional enforcement while there has been no real judiciary. Carapico describes a “veneer of constitutionalism” that sets us up for next month’s presidential election, whereby the election is only a ceremonial rubber stamp of the president’s hand-picked successor. She asserted that the election merely allows Saleh to save face, and that unlike the elections in Egypt, the Yemen’s elections will not come close to being true transitional elections. On the other hand, she described how the civil society uprising has been remarkable; particularly the role of Nobel Prize Laureate Tawakol Karman and the willingness of armed tribesmen to engage peacefully for a sustained period. She concluded by saying that Yemen was unique in that the “revolution caused Facebook” and its rising usage in Yemeni mobilization, and not the other way around, as it seemed in other Arab countries.

Stacey Philbrick Yadav stated that focusing on Saleh and whether or not he is in the country is misleading. She said that focusing on the “will he or won’t he” question misses the real barrier to transition, which is the tense and at times adversarial relationship between the organized opposition and other segments of Yemen’s political opposition. She state that though his exit paves the way for greater implementation of Gulf Cooperation Council (GCC) provisions, his departure is merely a symbolic loss. Protests have largely been based around a call for legal accountability, particularly for Saleh, but that window has now closed. The Joint Meeting Parties (JMP) leaders were also left out of negotiations that led to this process of possible transition. She looked at the historical context, where for a decade the JMP has been organizing around a motif of anti-corruption as opposed to revolution because the alliance could sustain nothing more demanding due to its internal divisions. However, Yadav asserted that the GCC agreement contains no mechanism for addressing the largest objectives of legal accountability and corruption. She also described an ongoing “parallel revolution” that is taking place: a series of sit-ins and “seizing of the keys” on a grassroots level that seeks to reveal and address corruption. The JMP has tried to claim some responsibility for this parallel revolution, but its efforts have not been seen as credible. According to Yadav, many now view the JMP as a “part of the system,” albeit one that is not seen as functional. Senior members of al-Islah have weak commitments to the JMP alliance while there has been a chasm between the young and old generations in the JMP. In this situation, the younger members are aligning with anti-GCC opposition groups. They’ve organized massive marches on the capital, in a very “legible and symbolic lexicon” according to Yadav. However, the marches were met with force that was endorsed by the JMP transitional government, and these actions have served as the death knell to the JMP-led alliance. At the same time, the GCC process has pushed back the goal of good governance by affirming the JMP’s centrality and at the same time initiating the kinds of pressures that are going to lead to its disintegration.

Lastly, Laurent Bonnefoy affirmed that the revolutionary process is still ongoing. He described how one of the most critical forces in determining the future of Yemen is the Islamist movement, yet these movements are not monolithic but rather fragmented. In particular, he described five actors that have been central to the revolutionary process. Among these is Islah, where, in the framework of the JMP, the party was initially reluctant to fully participate in the revolution. However, over the course of the spring, they’ve started to play a larger role in structuring the revolutionary movement through activists, NGOs, and mosques, and according to Bonnefoy, essentially “hijacking the movement.” He asserted that they have become the main interlocutors of the state and have come to represent the revolutionary youth despite their initial reluctance. Bonnefoy also described the quietist Salafi movement, the Zaidi revivalists (who started their own political party, Al-Umma), and the Jihadis. According to Bonnefoy, because of the revolution’s non-violent nature, it has been emphasized that violence and loyalty are not the main ways of fostering change. Consequently, the Jihadis have a crisis of legitimacy with respect to their Jihadi narrative. During the Question and Answer session, Bonnefoy defended the terms of the GCC agreement, describing the agreement as the best that one could expect though not necessarily preferable. He also asserted that amongst the various movements, the Haraki Salafists are on the rise while others are either losing legitimacy, in decline, or mired by internal conflict.

In response to a question from the audience, Professor Stacey Philbrick Yadav brought the event full circle, explaining how the media has reduced Yemen to a narrative of counterterrorism and containing al-Qaeda. She said that when things don’t fit that narrative, it doesn’t get covered. Bonnefoy added that there is simply a lack of knowledge on the part of journalists when it comes to Yemeni society and its inner workings.