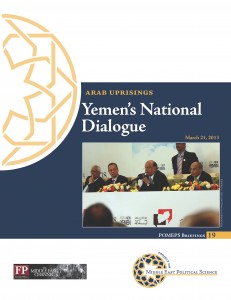 Yemen began its long-awaited National Dialogue Conference this week in Sanaa. The NDC hoped to find some zone of consensus for moving forward in its transition from the long rule of Ali Abdullah Saleh. It has been beset by many problems of representation, withdrawals and boycotts, deeply entrenched divisions, and the perception of irrelevance to the real problems of Yemenis. For a while it looked like it might never actually convene.

The stakes are high, as April Alley argues in an October essay, in a country facing a slide back into political collapse and mass violence. As Danya Greenfield argues, the urgency of the situation leaves few options: “despite opposition to the dialogue, it is clear that the status quo is unsustainable. The oft-repeated mantra among many Yemenis is that the question is one of dialogue or civil war.” But just because something is needed does not make it possible. “Yemen’s National Dialogue” collects outstanding recent Middle East Channel analysis of the National Dialogue, its challenges, and its prospects. Read more…