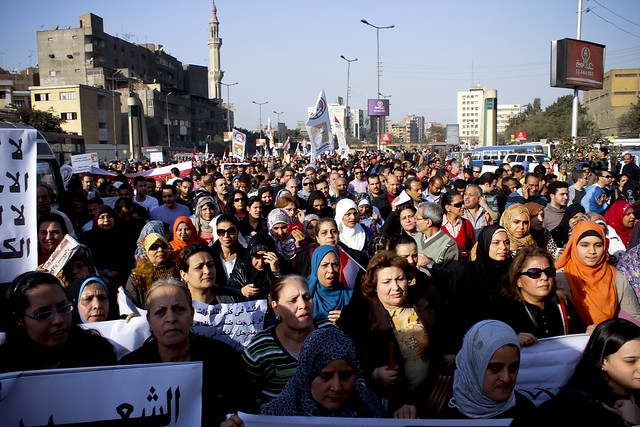 On March 10-11, POMEPS hosted a workshop at George Washington University focused on women and gender in Middle East political science research (watch a public panel discussion with four participants here). The workshop brought together more than a dozen diverse scholars working on issues related to women and gender in the region. Drawing from a wide range of methodological and theoretical perspectives, participants contributed short memos that examined how changing formal institutions impact women’s political participation, how the uprisings and post-uprisings context have expanded (and shrunk) space for women, and how activism and gender continue to interact. Stay tuned for concise and thoughtful analysis.

Workshop papers will be published here once a day over the next few weeks and then released collectively as volume 19 in our POMEPS Studies series.

“Why Egyptians have mobilized against public sexual violence,” By Vickie Langohr, College of the Holy Cross

“First Ladies and the (Re) Definition of the Authoritarian State in Egypt,” By Mervat F. Hatem, Howard University

“Tunisia uncovered a history of state sexual violence. Can it do anything?” By Hind Ahmed Zaki, University of Washington

“The Future of Female Mobilization in Lebanon, Morocco, and Yemen after the Arab Spring,” Carla Beth Abdo, University of Maryland

“Women and the Right to Land in Morocco: The Sulaliyyates Movement,” By Zakia Selime, Rutgers University