* This memo was prepared for the “Islamist Social Services” workshop, September, 23, 2014.

The scholarly literature has long argued that one of the reasons that parties like the Muslim Brotherhood of Egypt are able to earn the loyalties of voters is through their provision of health, welfare, and educational services that the cash-strapped states of the Arab world are increasingly unable (or unwilling) to provide. However, in recent years, the provision of social services by Islamist parties has gone from being an explanation of Islamist success to something to be explained in itself. After all, clientelistic service provision has long been recognized to be an effective – even basic – electoral strategy. An account that locates Islamist success in such a strategy would have to also explain why competitors to Islamists do not also pursue the same means of winning votes. In other words, inasmuch as social-service provision is something that any party could decide to do, why is it that only (or mainly) Islamists do it? Is there anything to prevent nonreligious parties from distributing the bottles of oil and bags of sugar that many of the Egyptian Muslim Brotherhood’s detractors credit with that movement’s rise to power in 2011?

There are three potential answers to this question, all of which focus on the characteristics of Islamist organizations versus those of their rivals. The first holds that Islamists possess an organizational model – built on highly selective recruitment methods, the relentless inculcation of norms of loyalty to fellow members and obedience to superiors, and a regimented system of promotion – that makes that group more capable of concerted action than those who lack such a model.[1] In this telling, Islamists are better able to provide services because their internal organizational structure makes them better at doing everything. However, there are several reasons to doubt this account. First, Egyptian Communist organizations also did similar things, thoroughly vetting initiates and employing systems of clandestine cells and emphasizing loyalty among their members, and yet were unable to become anything more than fringe groups in Egyptian political life.[2] Second, the Salafi party, Hizb al-Nur – the second-most popular party in the 2011-2012 parliamentary elections – does not apply the Brotherhood’s organizational model and is still electorally successful and appears to have engaged in service provision.

The second argument holds that Islamists are better able to provide services because of their religious nature. On the one hand, their religious focus is supposed to make them more concerned with service provision than their rivals. This may be the case, and I have not collected data on the question. Given the supposed electoral return to service provision, however, it seems remarkable that non-religious rivals would not get in on the act, if only out of self-interest. Moreover, the ideologies that animate some Islamist rivals, particularly on the left, are more than sufficiently concerned with the uplift of the poor to motivate collective action in this arena. One need only look at the clientelistic operations of leftist parties in Latin America to put to rest this idea that a concern for the poor is a special characteristic of religious groups.[3] An alternative rendering of the argument that religion makes Islamists more likely to provide services (and to do it well) lies in the role faith plays in making organizations disciplined and cohesive. There are lots of testimonies to the fact that religion is a powerful resource within groups, and that groups like the Muslim Brotherhood and the Salafis are more capable of concerted action (such as providing charity) because the religious authority with which their leaders are imbued, and the religious mission of their organization, inspires greater commitment and follow-through. This sounds plausible on its face, but again, the experience of Leftist parties around the world belies the notion that Islamist organizations have a monopoly on “religion.”

A third account, and the one I tend to agree with, is that Islamists simply possessed greater opportunities for service provision than their rivals. A traditional society replete with mosques and Islamic social service organizations in which, as Janine Clark has documented, both Islamists and ordinary citizens are embedded, provides religious actors with numerous conduits through which to reach potential voters.[4] A Muslim Brotherhood member who is also a board member of a local Islamic charity is going to be able, at election time, to festoon the offices of that charity with Muslim Brotherhood posters and campaign materials, and to piggy back off of the charity’s ties within the community to identify potential targets for clientelistic appeals (particularly after the fall of Hosni Mubarak, when restrictions on such activities were lessened). For leftist politicians, who are just not as likely to participate in these forms of religious life, there are no real analogues to the religious networks available to Islamists. Labor organizations, which one might expect to serve this function, and which form the backbone of leftist parties around the world, are weak and inchoate in Egypt (a function of both government manipulation and the country’s relatively underdeveloped industrial sector).[5] This is not to say, however, that non-Islamists were bereft of means of servicing voters—after all, the other great “traditional” form of organization endemic in Egypt is, as several scholars have noted, the institution of the “local notable,” rooted in the patriarchal affective ties that characterize rural life.[6] Goods provision has always been an important part of how these local notables garner support, and it is why the only real challenge to Islamists at the local level has ever come from these kinds of actors. During the Mubarak era, many of the most potent local notables were co-opted by the ruling party. After Mubarak’s fall, the power of these notables was temporarily disrupted by the dissolution of the ruling party and a shift in electoral rules that raised the costs of political participation, leaving the political landscape more or less open before Islamists.

The upshot of the above discussion is this: To the extent that service provision is a determinant of Islamist success, it is best conceived of as an intervening variable in a longer causal chain, in which developmental factors and regime strategies combine to create a dearth of opportunities for non-Islamists (particularly leftists) to engage in the same strategies.

What do Islamist social services do?

Now, the account I’ve offered above assumes that Islamist social service provision is an arrow in a largely clientelistic quiver. But this is not the only way of conceiving of it. There are three alternative ways in which service provision may be operating to generate support for Islamists. None of these accounts does violence to the basic intuition I’ve offered above, but they do provide alternative predictions as to the durability of an Islamist support base created by service provision. The first holds that commitment to Islamism is actually logically prior to the receipt of Islamist social services. In this telling, services are a “selective incentive” offered to in-group members. In other words, in order to take advantage of Islamic clinics or services, you must be an Islamist. The second account posits that services are offered as a way of creating Islamists. Here, as with the clientelistic account, support for Islamists is logically subsequent to service provision, which serves to put the recipient in close contact with Islamist providers and facilitate some process of ideological change. Finally, the third alternative account (advanced by, among others, Nathan Brown and Melani Cammett and Pauline Jones Luong) is that Islamist participation in social service projects are simply opportunities for Islamists to build reputations for effectiveness, pro-social behavior, and other positive qualities that stand them in good stead at the ballot box.[7]

Each of these mechanisms leads to different expectations regarding the staying-power of support for Islamists that is generated through service provision. If social services are merely part of a clientelistic strategy, it should not have much persistence beyond the last election. If it is offered only to Islamists, or creates Islamists, then we should find the relationship between Islamist support and receipt of Islamist services to be robust over time, even in the face of shocks such as the defamation campaign suffered by the Brotherhood in the wake of the June 30 protests and subsequent military coup. Finally, if social services merely create positive reputations for Islamists, then these reputations (and support for Islamists) are potentially open to disruption as voters receive alternative information about those groups.

In the remainder of this memo, I want to try to offer a very preliminary test of these mechanisms. Specifically, I want to see whether the relationship between receipt of Islamic services and support for Islamists changes over time. Our baseline measure of the relationship comes from a survey I conducted with colleagues around Egypt’s first post-Mubarak parliamentary election (November-January 2012). A nationally representative sample of 1,675 adults were asked whether they had ever used health services attached to a mosque or an Islamic charity. Only 347 of them answered in the affirmative. Of these, 147 (or 42 percent) said they had a “lot of confidence” in the Muslim Brotherhood, and 86 (or 25 percent) said they had a “lot of confidence” in the Salafi Call Society (the Muslim Brotherhood’s main Islamist counterpart and sometime rival). So, our baseline is that there was a strong relationship between the two things, further reinforced by the fact that recipients were more likely than non-recipients to trust the Brotherhood (42 percent to 33 percent) and the Salafis (24 percent to 20 percent). This is represented graphically in the “mosaic” plots in figure 1, which show the conditional distributions of support for each party and receipt of Islamic health services. 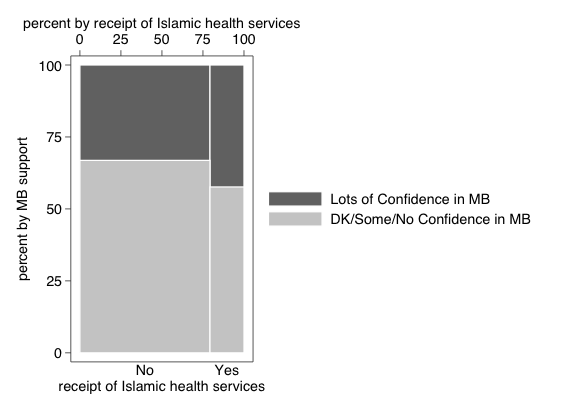 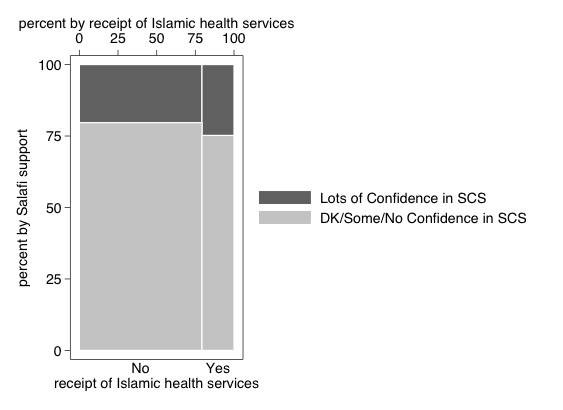 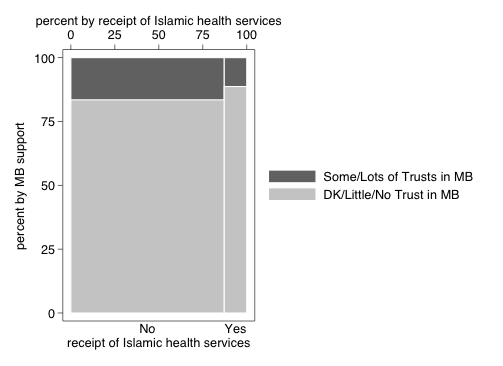 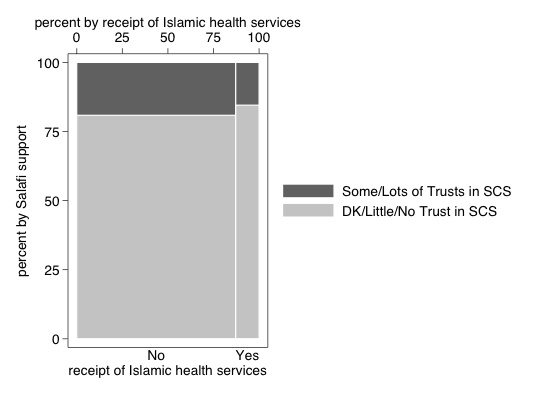 What this suggests is that Islamist services are likely to generate support through the strictly clientelistic mechanism or the “reputation-building” identified by Cammett and Jones-Luong and others, both of which are consistent with the observed diminution in support for Islamists even among those who receive services. Again, however, given that this analysis lacks any controls for potential confounds, it is at best suggestive. Further work clearly remains to be done in this exciting and important area.

Tarek Masoud is an associate professor of public policy at Harvard University’s John F. Kennedy School of Government. He is the author of Counting Islam: Religion, Class, and Elections in Egypt (Cambridge University Press, 2014).