*This memo was originally drafted as a part of the Adaptation Strategies of Islamist Parties and Movements  workshop held at George Washington University January 27, 2017. POMEPS Studies 26 is a collection of the memos from this workshop, available as an open-access PDF here.

How do Islamist parties under varying degrees of repression or freedom govern and in what ways does this impact the quality or equality of governance? In a recent article written with Mounah Abdel-Samad, we examined this question in Tunisia, where Ennahda operates in a minimalist democracy and is, thus, free to implement electoral strategies and represent constituents in accordance with Islamist values and ideology.[1]

Ennahda emerged as an electorally successful party in the country’s first free elections, winning the largest proportion of seats (37 percent) in the Constituent Assembly in 2011 and achieving second place (32 percent) in 2014. We find that Ennahda governs differently from non-Islamist parties, resulting in an Islamist mandate effect and better symbolic and service representation of women. By examining evidence from two other cases – Morocco and Algeria – we also clarify the conditions under which the Islamist mandate effect operates and shed light on how Islamist parties adapt to freer electoral environments, where they are better able to govern according to their values, and why it improves governance for women.

Islamist Parties and Women’s Representation: The Case of Tunisia

Substantial literature shows that women are marginalized from political networks in clientelistic settings (Beck 2003; Goetz 2002, 2007; Tripp 2001) and, as a result, face barriers to elected office (Bjarnegård 2013) and services. Surveys of Moroccan and Algerian parliamentarians and Libyan citizens find that females have significantly less access to clientelistic services, but that electing women, particularly through quotas, reduces the gender gap (Benstead 2015, 2016a, b). Apart from a few studies (Arat 2005; Blaydes 2014), however, little is known about how Islamists – or Islamist women – impact women’s access to services or ability to interact with elected officials.

Indeed, despite the growing role of Islamist parties in MENA politics, most literature and public attention focuses on how these movements impact substantive representation of women’s rights.[2] Many pundits see the Arab spring’s Islamist victories as a winter for women (Barchrach 2011). Yet while the media and scholarly literature debate Islamist parties’ impact on women’s rights (Marks 2012; Unal 2016), little research has examined their impact on women’s symbolic and service representation. Briefly, symbolic responsiveness is interactions with constituents (Eulau and Karps 1977), which build trust and engagement and create conditions for service and substantive representation, in the form of club goods and legislation. Service responsiveness is providing services, such as healthcare, electricity, or jobs (Benstead 2016a). In authoritarian regimes, service responsiveness reinforces clientelistic norms, but provides critical services for marginalized groups.

Conventional wisdom assumes that Islamist successes negatively affect women, whether in terms of family laws, service provision, or other governance outcomes. Yet literature on Islamist parties and governance suggests the picture is more nuanced; some studies suggest that Islamist parties benefit women by improving governance outcomes like healthcare (Blaydes 2014). Others suggest that the chief obstacle to gender inequality in government services may not be Islamism, but clientelism, which is deeply embedded in the Arab world’s authoritarian and transitional political contexts and advantages men due to their structural and numerical dominance in positons of power (Sung 2003; Bjarnegård 2013).[3] Because Islamist parties are more internally democratic than some non-Islamist parties, serve marginalized communities, and institutionalize constituency service to avoid corruption and patronage, electing Islamists may diminish males’ advantages accessing clientelistic networks and improve women’s access to services. This would be particularly true if Islamist parties use women to mobilize female supporters in sex segregated, female environments such as homes, mosques, and social events, which increases women’s access to clientelistic networks, while diminishing access for men, thus, creating greater gender equality.

In our paper, we take advantage of increased Islamist and female representation in transitional Tunisia, where Ennahda won 37 percent of seats and women gained 31 percent of seats due to a legislated quota in the 2011 Constituent Assembly elections, to test the impact of female and Islamist deputies on women’s symbolic and service representation. To do so, we create three binary dependent variables, whether the individual: (1) knows the name of at least one parliamentarian from the district (symbolic representation), (2) has interacted with a member in at least one way, such as in a meeting, public place, deputy’s home or office, party office, hearing about second hand, or is friend (symbolic representation), and (3) has asked for help with a personal or community problem (service representation, assuming that the requests are equally successful for men and women).[4] Figure 1 shows that, especially when it comes to symbolic representation, female citizens in Tunisia are significantly less likely to enjoy interactions and connections with parliamentarians than are men. We also use a survey of 80 members of the Tunisian Constituent Assembly, conducted by Mounah Abdel-Samad, to show that Islamist women deputies indeed use more social events than do non-Islamist women, while Islamist members use party offices more than non-Islamist members. 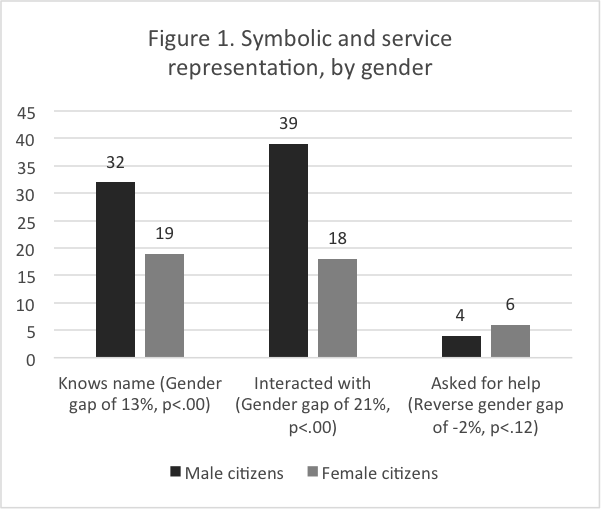 Yet, consistent with other research, our analysis shows that electing women has a positive impact on women’s symbolic and service representation. Controlling for relevant factors, women are more likely to know a deputy’s name and have asked for a service in districts where a higher proportion of female parliamentarians are elected.[5] The results for Islamist parties are more striking. Islamist parties in general and Islamist female deputies in particular increase the probability women know a deputy’s name and have asked for services (that is, symbolic and service representation). Islamist female deputies also increase the likelihood that women will interact with parliamentarians, while decreasing men’s ability to do so (that is, symbolic representation).

We argue that Islamist and Islamist female deputies better represent women due to an Islamic mandate effect – Islamist parties’ efforts to govern cleanly, provide services to the marginalized, and respect norms of piety and sex segregation by using female parliamentarians to reach women in private and public spaces, such as homes (Blaydes and Tartouty 2009). We adapt this term from Franceschet and Piscopo (2008), who argued that quota-elected women’s perceived a mandate, or “obligation to act on behalf of women,” due to their underrepresentation (394-395).

Our concept has two components, one stemming the parties’ institutionalization of service provision (the party component), and the other from its use of female leaders to reach women (the gendered-component). We measure these two components using the proportion of Islamist, Islamist female, and female deputies in the district. First, in the party component, Islamist parties lower women’s barriers to interaction with and services from parliamentarians as a result of four features of the party strategy to institutionalize and reduce their reliance on patronage in their constituency service practices. These include: (1) organizational capacity and direct contact with citizens, (2) effective social service provision, (3) use of ideological values (fairness and social responsibility), and (4) party reputation.[6] As a result, women are better able to bypass existing patronage networks and access services.

Second, in the gendered component, Islamist parties’ use female members to mobilize and serve women citizens (Arat 2005; Ayata 1996) and, while not the only party to do so, have made use of quotas to increase the number of women in their organization (Clark and Schweder 2003). More than women from other parties, Islamist female deputies mobilize voters and reshape social networks by meeting other women in private spaces such as homes for weddings and teas and establishing linkages with women who were previously excluded from patronage networks (Arat 2005; Blaydes and Tartouty 2009; Clark 2004; Philbrick Yadav 2010). By emphasizing piety, Islamist parties create “sacred” spaces, which ensure that women can safely enter political offices and participate in meetings free from harassment and negative impacts on their reputation.

We also hypothesize and find evidence that female parliamentarians from across the party spectrum will improve representation of women, consistently with existing research (Benstead 2016a).

We find that electing women, as well as Islamist parties, improves symbolic and service responsiveness to female citizens in Tunisia. To support our argument with comparative evidence and elucidate the conditions under which we expect an Islamic mandate effect, we also draw on surveys of 200 Moroccan and Algerian parliamentarians, which show that members of the Islamist PJD in Algeria, independently of gender and quota status, receive more service requests from women than do non-Islamist parties, while Islamist identification has no impact in Algeria.[7] Accordingly, we argue that, in order for the Islamic mandate to take effect, Islamist party organizations must be able to act autonomously from the state (party component) and elect more than a few women (gendered component). These conditions help explain the presence of the mandate effect in Tunisia and Morocco, where Islamist parties had greater latitude vis-à-vis the regime and elected a number of women, but not Algeria, where these conditions were not present during the 2002-2007 parliamentary mandate. Islamist parties in Algeria’s weaker and more controlled parliament had limited freedom to implement activities independently of the regime (Benstead 2016b). Islah in particular experienced regime interference, such as changes to electoral lists and had few resources to implement programs (Benstead 2008). Moreover, Algeria’s two Islamist parties (2002-2007), MSP (formerly HAMAS) elected no women, while Islah had only one female deputy.

Some Islamist movements face persecution, which has only increased in certain contexts since the Arab spring. This has placed severe limitations on their ability to operate and forced them to make organizational, ideological, and strategic changes. In other contexts, the Arab spring has brought more freedom for Islamist parties and they have adapted in ways that shape governance outcomes for minorities. The impact of Islamist parties’ success reaching out to a wider range of constituents, including women, is likely to remain pertinent as Islamist parties continue to evolve with changing contexts.

[1] This article draws on the Tunisian Post-Election Survey (TPES), conducted by Lindsay Benstead and Ellen Lust with funding from the National Science Foundation and is part of the Transitional Governance Project (TGP), and the Constituent Assembly Survey, conducted by Mounah Abdel-Samad with funding from San Diego State University. For a current version of the working paper, see Abdel-Samad and Benstead (2016).

[3] Clientelism is, an “informal relationship between two actors of asymmetrical socioeconomic power where the patron…controls…resources…clients pursue but often cannot receive otherwise” (Manzetti and Wilson 2007, 953).

[4] The indicator used for service representation is contacting a parliamentarian for help. Due to the small number of cases, we were not able to distinguish between successful and unsuccessful requests for help in the regressions. However, descriptive statistics show that men are slightly more able to get services – 26% of men and 21% of women who asked for a service were satisfied – even though the difference is not statistically insignificant (p<627).

[5] Although we found an effect on women asking for services, the number of observations was not large enough to test the impact on successfully receiving services.

[6] Islamist parties try to avoid traditional patron-client relations, but do not do so completely, sometimes expecting citizens receiving services to vote for them.

[7] Surveys of parliamentarians conducted by Lindsay Benstead. See Benstead (2016a) for more details on the methodology.

Abdel-Samad, Mounah, and Lindsay J. Benstead. 2016. “Does Electing Women and Islamist Parties Improve Women’s Symbolic and Service Representation?” Paper presented at the “After the Uprisings: Public Opinion, Gender, and Conflict in the Middle East” workshop, Kansas State University, May 5, 2016. Available at: https://pdx.academia.edu/LindsayBenstead.

Barchrach, Judy. 2011. “Arab Spring for Him, Arab Winter for Her.” World Affairs. Available at

Representation and Public Opinion in Morocco and Algeria.” Dissertation. University of Michigan.

Implications of Gender for Voter Recruitment and Mobilization.” The Middle East Journal 63(3): 364–380.

Institution and the Middle Class in Egypt, Jordan and Yemen,” Comparative Political Studies 37(8): 941-968.

Clark, Janine A. and Jillian Schwedler. 2003. “Who Opened the Window? Women’s Activism in

Tripp, Aili Mari. 2001. “The Politics of Autonomy and Cooptation in Africa: The Case of the

Non-State Actors and Approaches to the Yemeni State