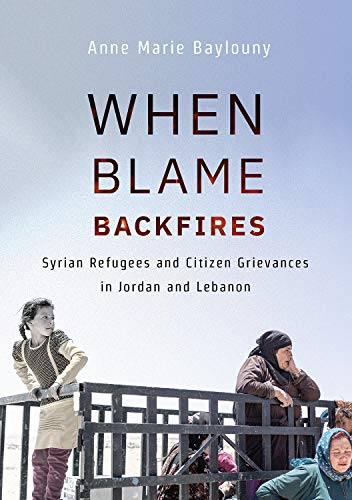 Anne Marie Baylouny talks about her latest book, When Blame Backfires: Syrian Refugees and Citizen Grievances in Jordan and Lebanon, with Marc Lynch on this week’s podcast. The book explains how the recent influx of Syrian refugees into Jordan and Lebanon has stimulated domestic political action against these countries’ governments. 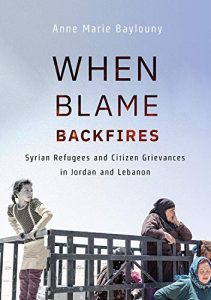 Baylouny explains, “So usually these governments use all kinds of groups…to blame for their faults. Oh we can’t provide this. We have water shortage because of the Iraqis. This problem with the government is because of another group and they blame them for all their lack of state capacity. So here you have an overwhelming number of Syrians over a quarter of Lebanon’s population and at least 10 percent of Jordan’s, probably their first and second in the world for refugees per capita. And they’re foreigners and a lot of them are poor and they came in in masses…So you have they have all the elements that you would expect states to be able to successfully deflect blame from themselves on to that minority or foreign group.”

She goes on to say, “They [the Syrians] were welcomed very well by the Lebanese and Jordanians in the beginning. Then the honeymoon period ran out and the numbers got very large. And the Jordanians and Lebanese universally started to blame things on the Syrians…They’re using too much water etc. but they didn’t do the second part of scapegoating. The second part of scapegoating is when you basically dissolve responsibility from the state or government for that problem. So you blame Syrians and you go back to your couch…Instead they blamed the government said you need to provide us housing, you need to provide us better schools, you need to provide us water, electricity, you need to fix the problem. The Syrians may have caused them but you need to fix them. And they mobilized. They began mobilizing against the government.”

Anne Marie Baylouny is associate professor of National Security Affairs at the Naval Postgraduate School, specializing in Middle East politics, grassroots organizing, and Islam. Baylouny received her Ph.D. in Political Science from the University of California, Berkeley.  Her recent work includes publications on militia governments in the Lebanese civil war, Hezbollah’s media messages, and authority in ungoverned spaces. Baylouny has been the recipient of numerous fellowships and awards—Fulbright, the Social Science Research Council, and the Mellon Foundation, among others.