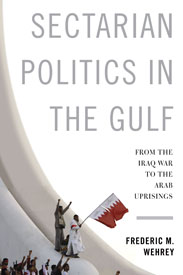 Last week POMEPS featured Toby Matthiesen’s Sectarian Gulf on the blog, and this week we’re excited to showcase yet another excellent 2013 release on the same topic, Frederic M. Wehrey’s Sectarian Politics in the Gulf: From the Iraq War to the Arab Uprisings (Columbia University Press). Sectarian Politics in the Gulf was named one of the best books of 2013 by ForeignPolicy.com’s Middle East Channel. In Sectarian Politics in the Gulf Wehrey investigates the roots of Shiite-Sunni tensions in the Gulf since the beginning of the 2003 Iraq war. He​ identifies “the factors that have exacerbated or tempered sectarianism, including domestic political institutions, the media, clerical establishments, and the contagion effect of external regional events, such as the Iraq war, the 2006 Lebanon conflict, the Arab uprisings, and Syria’s civil war.” Moreover, Wehrey “builds a historical narrative of Shi’a activism in the Arab Gulf since 2003, linking regional events to the development of local Shi’a strategies and attitudes toward citizenship, political reform, and transnational identity.”