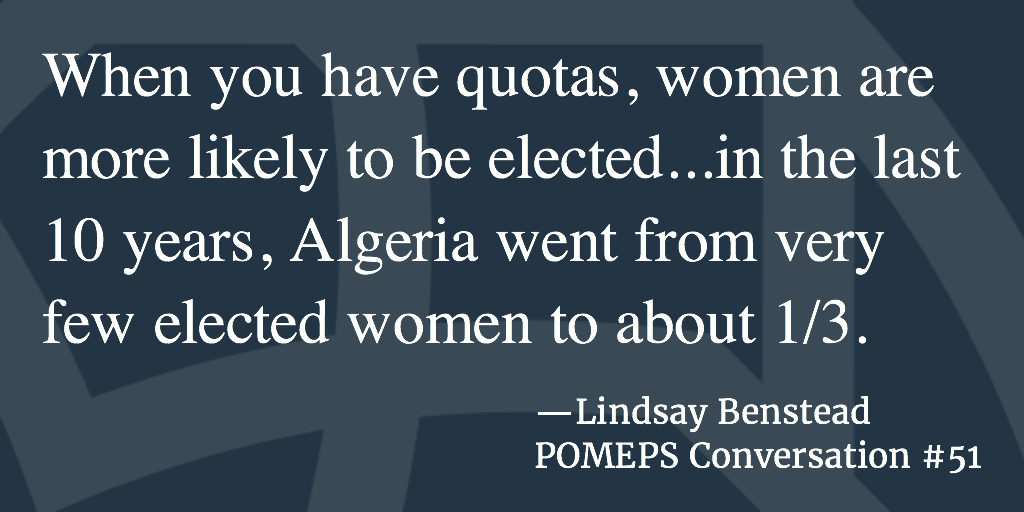 From our new Podcast

This week in our POMEPS Conversations podcast #51, Marc Lynch sits down with Lindsay Benstead to discuss female political candidates in the Middle East, and the voter bases behind them. To listen to the other podcasts in the series subscribe via iTunes here or stream them on SoundCloud here.

Ellen Lust (University of Gothenburg), Gamal Soltan (American University of Cairo), and Jakob Mathias Wichmann (Voluntas Advisory) explain how fear is the cause of failure in the case of the Egyptian revolution.

Brent Eng  and José Ciro Martínez (University of Cambridge) wrote about the perils of international food aid for starving Syrians.

Ellis Goldberg (University of Washington) discussed the actions of the Egyptian military after the revolution.

Marc Lynch watched the X-files and asked if political science can tell us whether the truth is out there.

In case you missed it, we’re holding a virtual symposium to reflect on the Arab uprisings at the five year mark. See what’s been published so far here.

On February 1, Sean L. Yom will join us to discuss his recent release, From Resilience to Revolution. Find more information and RSVP here.

On February 8, Ellen McLarney will join us to discuss her recent release, Women in Egypt’s Islamic Awakening. Find more information and RSVP here.