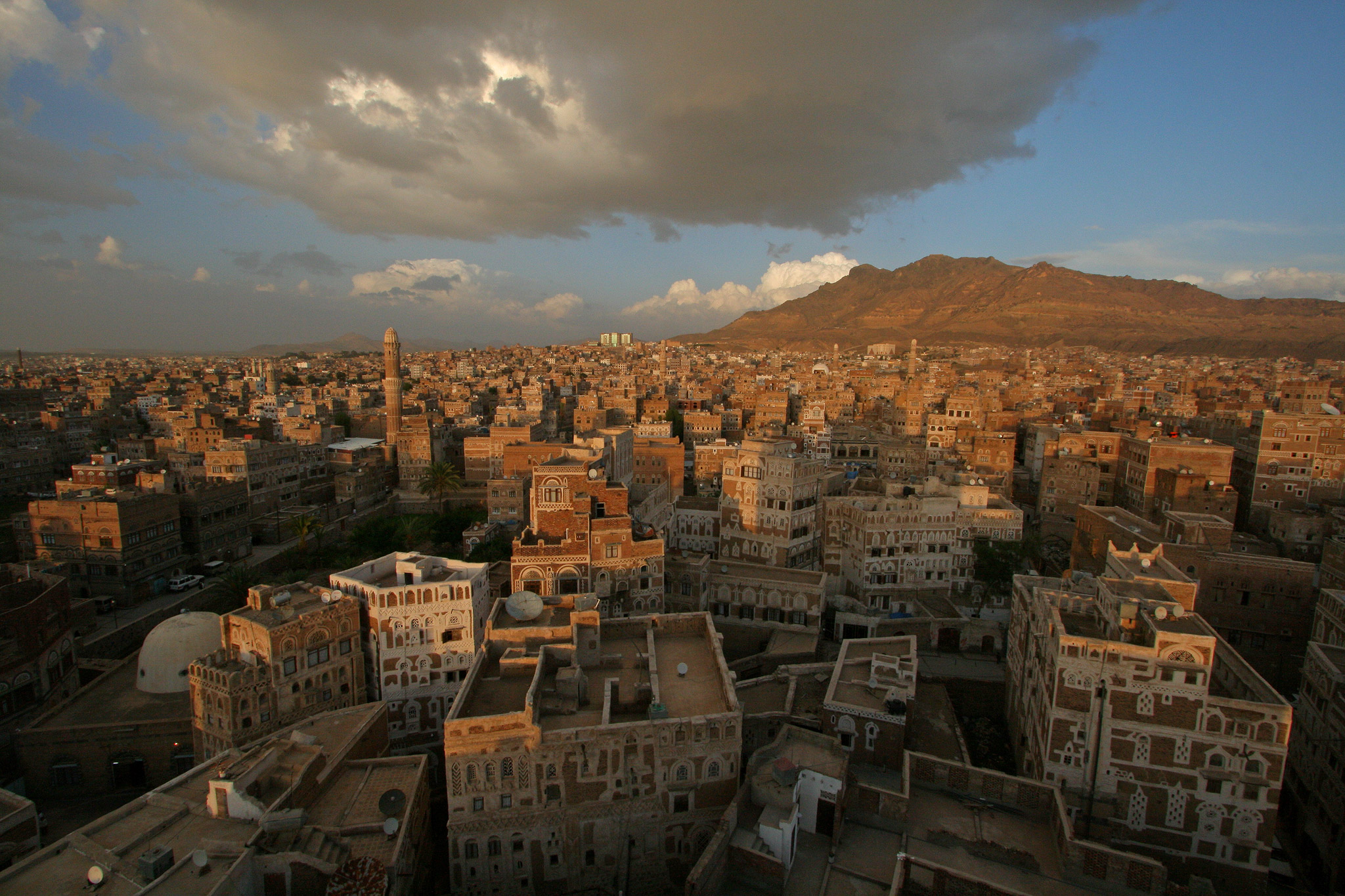 After late March 2015 when the Kingdom of Saudi Arabia, the United Arab Emirates (UAE), and some coalition partners deployed advanced, expensive American and British weapons against its impoverished neighbor, Yemen, man-made disaster ensued. Humanitarian and human rights organizations have documented starvation, massive homelessness, casualties, and probable war crimes. The research presented here focuses on the specifically economic repercussions of thirty months of Saudi-led, U.S.-backed aerial bombardment and air-and-naval blockades that disabled productive capabilities, trade, public services, a fragile ecology, and even the ability to collect reliable data. While deposed presidents clinging to power and militias from the Houthis to al-Qaeda have imposed gruesome, gratuitous human suffering, the disproportionate firepower of warplanes and warships has not only killed more people directly but also inflicted unmeasured damage to economies and ecologies. This is acute de-development.

Scholars of Africa, Latin America, and other post-colonial milieus have analyzed similar-sounding circumstances of under-development and dependent development. Under-development implies the extraction of raw materials, agricultural produce, labor, or other assets from a peripheral zone to centers of capital accumulation. Dependent development refers to the ways external control over key sectors like commerce, industry, banking, farming, or tourism constrain economic independence and prosperity. Both concepts, associated with the dependista school, reference appropriation and profit-taking: a net transfer of material or monetary benefits from poor zones to rich enclaves. Middle East scholars Sara Roy and Ali Kadri each introduced the notion of de-development to contextualize circumstances in Gaza, Iraq, and other war-torn territories under assault and siege, where resources and the means of production are demolished rather than expropriated. This brief analyzes how the notion of de-development, which Kadri also calls developmental descent, applies to the asymmetric (and unprovoked) Saudi-Emirati assault on Yemen. Deflation, capital stock depreciation, and ecosystem degradation are serious consequences.

The demise of data-gathering mechanisms, never well-developed in Yemen, is symptomatic. As Kadri observed, wartime de-development destroys the means of information production. Casualty figures, notably, are inconsistent and unreliable. Yemen’s Ministry of Health enumerated about 10,000 fatalities as of October 2016, including both civilians and combatants. That figure was still being widely cited a year later, notwithstanding a sharp increase in lethal bombing raids in 2017. One factor in the data deficit is that foreign expert consultants to Yemeni ministries evacuated in early 2015. International journalists have complained of a “media blackout” imposed when Saudi Arabia took control of air traffic control and airspace, forcing all incoming flights to land in the Kingdom for inspection before entering Yemen. Saudi authorities barred news correspondents from planes carrying United Nations personnel. A small group of Yemeni and international journalists working inside the country and abroad as volunteers, without funding, have tracked airstrikes by date, place, and target through an initiative called the Yemen Data Project (YDP).

The World Bank has documented this data deficit as well as a sharp economic contraction in the formal economy. Attempting to generate economic indicators for 2015 and 2016, the Bank’s economists declared that statistical data was no longer available, forcing them to estimate precipitous declines: GDP -40 percent overall; and for 2015 alone exports -66 percent, imports -43 percent, industry -38 percent, fixed capital investment -84 percent; and so forth. Only debt increased, by an estimated 67 percent. The value of the Yemeni riyal plummeted, taking purchasing power with it.

In addition to bombing and closing major airports, the Saudi-led coalition deliberately and indefinitely deactivated major seaports serving the heavily populated northern parts of the country under Houthi-Saleh control with an air-and-sea blockade. Airstrikes crippled the main Red Sea port of al-Hudaydah, and Saudi-Emirati naval inspectors refused importation of replacement cranes used for offloading cargo, along with most other shipments. The overall embargo – ostensibly to prevent weapons smuggling from Iran to the Houthi rebels – reduced the flow of food, fuel, medicines, and other essential supplies, according to international relief organizations. Prices for imported goods skyrocketed. In late 2017, after a Yemeni missile reportedly hit the Saudi capital, the coalition retaliated with collective punishment, tightening the vise by completely closing all airports, seaports, and land crossings, including entry points in the south ostensibly under control of the pro-Saudi government-in-exile. Beleaguered, under-funded, and overwhelmed Yemeni and international humanitarian workers presaged catastrophe.

The intentional manufacturing of economic and humanitarian disaster

Food insecurity, like the cholera epidemic that began in October 2016, is manufactured, not the result of underlying factors such as drought. The YDP tracked bombardment of roads, bridges, gas stations, and food production facilities – from potato chip factories to agricultural extension centers. Using YDP data and Ministry of Agriculture information, anthropologist Martha Mundy graphed, mapped, and analyzed the purposeful targeting of agricultural and food production sites, concluding that hunger and the decimation of farm communities are not a side effect but rather an intended consequence of the military campaign.

As the International Crisis Group has explained, hunger, food insecurity, and malnutrition stemmed from difficulties of both supply and demand. The stranglehold on imports imposed by the Saudi-led trade embargo restricted food supplies, but did not cause famine as conventionally understood; most markets have adequate stocks. The more severe problem, according to this analysis, was demand. For two main reasons, households couldn’t afford food at inflated prices. First, up to three million displaced persons, especially in the already-poor Tihama region along the Red Sea coast, lost even their meager livelihoods. Secondly, because of shrinking government revenues, a liquidity crisis, and suspension of central bank functions in most locations, after August 2016, civil servants no longer received their salaries – and once their savings were spent, their purchasing power evaporated. A complex story in itself, as analyzed by the Sana’a Center for Strategic Studies, the central bank’s insolvency deepened de-development, as an estimated two-thirds of formally employed adults – including teachers, health professionals, sanitation workers, and bureaucrats, overall the majority of women in the labor force – sold assets, spent savings, and found themselves destitute.

In combination, these factors distorted an already moribund, least-developed economy. Legitimate importers, traders, and truckers in much of the country went out of business. Smugglers, black marketeers, and other “merchants of war” with a financial interest in death and destruction flourished. Government revenues shrank, but private militias charged “taxes” at ad hoc checkpoints, especially along key, burgeoning smuggling routes from Oman, the UAE, and southern ports managed by Emirati forces. Beyond the catastrophically negative growth rates estimated by the World Bank, such trends signified critical de-development. Making matters even worse, most foreign banks cut business credit lines because of trouble processing transactions and ensuring repayment. Professional and business classes sank into poverty along with workers, the peasantry, and small traders. In the midst of such hardship, as Peter Salisbury (and some Yemenis active on social media) explain, in parts of the country some entrepreneurial individuals and communal initiatives have managed to rig informal banking to transfer remittances and set up solar-panel workarounds for the absence of electricity.

In the current era of global climate change, the U.S. military, many pundits, and some scholars ponder how drought and other weather events exacerbate social strife and military conflict. It is also important to consider the environmental impact of armed combat, as Johan Galtung observed more than three decades ago, and others are attempting to measure and assess. Chemical and nuclear weapons (not yet recorded in Yemen) inflict the most conspicuous ecological damage, but conventional warfare also inflicts twofold harms. First, destruction of what Sowers, Weinthal, and Zawahri call “environmental infrastructures” upsets economic activities, public health and ecological balance. The YDP list of water-related targets ranges from a desalinization plant to wells, reservoirs, and storage tanks; other attacks on buildings, farms, markets, factories, and homes almost certainly ruptured pipes and cisterns, too. As the sanitation system disintegrates, public health deteriorates. With skeletons of burned-out vehicles and debris from collapsed buildings strewn about, fuel for garbage removal trucks scarce, and a hiatus in government employee salaries, trash accumulates. Untreated sewage floods streets and farms. Incapacitation of sewage treatment plants, the electricity grid, and water delivery systems spreads cholera bacteria, diphtheria, and other water-borne diarrheal diseases. Damage to seawater desalinization facilities and other water treatment installations forces people to tap alternative, unsafe sources. Beyond risks to public health, water shortages (and/or inflated costs for water), heaps of garbage, and putrid odors hurt shopkeepers, restaurants and other businesses, especially in the major cities, exacerbating a vicious cycle of declining incomes and deepening economic contraction.

Secondly, military activity pollutes the air and the biosphere. Fighter planes emit more reactive, toxic gases and particles than commercial airliners. Their fuel consumption is so vociferous that the United States provides the Royal Saudi Air Force in-flight refueling to sustain its bombing raids. While quantitative scientific evidence is elusive, common sense indicates that the carbon footprint of hundreds of sorties a week for more than a hundred weeks is substantial. Offensive high explosive munitions, like the air-to-surface Hellfire missile, a 100-pound “tank-buster,” and a range of other pyrotechnic devices produce sonic or subsonic blasts that endanger livestock as well as terrestrial and aquatic wildlife. Both gravity-driven bombs and fuel-powered missiles leave craters, disturb water tables, and spread shrapnel and contaminants. Disruptions to terraces or irrigation trenches can cause spillover erosion across a wide ecosystem, further injuring landscapes and farms. In addition, as Omar Dewachi observed in Iraq, contamination by cement dust from collapsed buildings and heavy metals from munitions have dire consequences for public health and air quality.

Lastly, mass population displacement itself poses environmental hazards. Large influxes of people into the barren northern Tihama or the arid region around Marib, for instance, taxes already desiccated aquifers. Families without proper housing could contaminate soil and water. Livestock are either abandoned or relocate with owners to a place where they too drink and defecate as well as graze. Mountain terraces and lowland water harvesting channels require annual maintenance; prolonged absences have probably already contributed to significant erosion with both environmental and economic consequences. Faced with skyrocketing fuel prices, displaced and/ or impoverished families burn plastic bags and other trash for cooking-fires. The cumulative negative effects of all these factors will likely stretch far into the future.

While Saudi Arabia directs its carbon wealth to de-develop what used to be the breadbasket of the Arabian Peninsula, many observers, including some members of the U.S. Congress and the U.K Parliament, note that this catastrophic war profits American and British weapons exporters. In that sense, the dependista school could point to the enrichment of the capitalist core – the military-industrial complex – at the expense of the wretched of the earth.

Some World Bank economists, Emirati investors, and overseas Yemeni businessmen enthusiastically predict post-war reconstruction, growth, modernization, and new business opportunities. Indeed, when warfare shatters any economy, cessation of hostilities heralds a construction boom measured in new jobs and GDP growth. Nonetheless, several considerations temper our optimism. Ecological damage is widespread and likely irreparable. Moreover, Gulf tycoons could dominate future investments in shipping, tourism, oil pipelines, even large-scale agriculture; if so, they will syphon profits in a classic dependent-development scenario. Finally, shattered or stunted bodies and minds may never entirely recover. If there is a glimmer of hope, it is in local and community entrepreneurship.

Baider, Ahmed and Lizzie Porter, “How the Saudis are making it almost impossible to report on their war in Yemen,” The New Statesman August 23, 2017 http://www.newstatesman.com/world/middle-east/2017/08/how-saudis-are-making-it-almost-impossible-report-their-war-yemen

Salisbury, Peter. “Yemen and the Business of War.” The World Today, August 2017, 28-30. https://www.chathamhouse.org/publications/twt/yemen-and-business-war