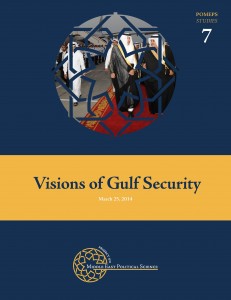 The turbulence in Gulf security politics today is difficult to miss: unusually sharp public splits in the Gulf Cooperation Council (GCC), rising sectarian tensions, tough moves against the Muslim Brotherhood and other Islamist movements, and markedly harsh crackdowns on even minor forms of public dissent. Gulf elites are openly airing profound doubts about the future of the U.S. regional role, worries about blowback from Syria, and fears about the implications of a Western rapprochement with Iran. Regime efforts to insulate themselves from popular dissent have included potentially unsustainable economic commitments and self-defeating internal repression. Meanwhile, deep political divisions are disrupting the long-standing security partnership between Washington and the GCC states.

How has the turbulence of the last three years affected security in the Gulf? Do new domestic, regional, or international trends fundamentally alter how the regimes, political movements, and people of the region grapple with challenges to their security? How new are these challenges, and how extraordinary the responses? What is gained, and what potentially distorted, by viewing these events through a security lens? Which assumptions in the academic literature about Gulf security have proven resilient, and which require rethinking? On March 9, 2014, POMEPS and Matteo Legrenzi at Ca’ Foscari University brought together more than a dozen scholars based in the Middle East, Europe, and the United States to Venice, Italy to look closely at the new – or not so new – questions about Gulf security.

This should be the finest hour for the “regime security” perspective, which has been the dominant theoretical framework for understanding the region’s security politics in recent years. The regime security framework emerged to challenge the conventional Realist view of states primarily responding to external power and threat in their alliance and foreign policy choices. As Gregory Gause and many other scholars have effectively demonstrated, regimes faced threats to their own power and survival from within as well, and often prioritized those in their policy choices. Iran’s “threat” to Riyadh, for instance, had as much to do with its potential appeal to Saudi Shiites as it did with its pursuit of a nuclear arsenal.

This perspective seems to offer considerable traction on the domestic and regional maneuverings of Gulf regimes in the last few years. While no GCC regimes fell in the face of popular protest, the Arab uprisings clearly intensified and sharpened those internal regime security concerns. And, as several of the memos in this collection observe, the responses by Gulf states to these concerns included both domestic security crackdowns and regional foreign policy initiatives. The coordinated campaigns against the Muslim Brotherhood across the Middle East by Saudi Arabia and the United Arab Emirates (UAE), as Stéphane Lacroix, David Roberts, and Guido Steinberg suggest, reflected this logic of shoring up domestic power through foreign policy activism. So did the financial and political support by wealthy Gulf monarchies for less well-endowed fellow monarchs across the region.

The utility of the regime security lens should not distract analysts from its potentially dangerously distorting effects. As Toby Jones has argued, the regimes of the Gulf have often embraced crisis as a useful device for extracting international support and suppressing domestic dissent. After all, casting the political aspirations of the Shiites of Saudi Arabia’s Eastern Province, large numbers of Bahraini citizens, or youth activists demanding political reforms as a “security” challenge serves to delegitimize their political concerns and to justify a repressive response. Fred Wehrey, in this collection, notes how Saudi or Bahraini elites have for decades framed demands for political rights by oppressed Shiite communities as “security” threats linked to Iranian ambition. The labeling of the Muslim Brotherhood as a “terrorist” group has much less to do with security than with politics. As useful as the regime security framework appears for understanding the behavior of Gulf regimes over the last few years, then, there is also good reason to critically assess the constitutive effects of internalizing and naturalizing such a security discourse.

Gulf confusion and concern about changes at the global level also run through the memos in this collection. Gulf elites worry about the implications of the U.S. withdrawal from Iraq, refusal to intervene directly in Syria, and enthusiasm to negotiate with Iran over its nuclear program. Despite the continued deployment of U.S. troops across the region, as Gary Sick observes, many of these elites are troubled by the thought of a reduced U.S. security presence and willingness to deploy military force. At the same time, they profoundly disagree with Washington’s willingness to accept democratic change and a Muslim Brotherhood political role in Egypt and the rest of the region over the last several years. For several years, leading Gulf states have not just disagreed with the United States but have been actively working to undermine U.S. policy goals. At what point do such divergent worldviews and policy preferences challenge the concept of an “alliance?” What does this portend for the future of the alliance at the heart of the region’s security architecture?

The memos in POMEPS Studies #25: Visions of Gulf Security offer no new unified theory of Gulf security politics, but they point to some of the pressing new theoretical and practical challenges confronting the region. What happened to the human security agenda (Kristian Coates Ulrichsen)? Where do the region’s youth fit in the new security politics (Kristin Smith Diwan)? Is it possible to incorporate Iran into a regional security architecture (Rouzbeh Parsi, Gary Sick, and Gregory Gause)? How will the campaign against the Muslim Brotherhood rebound on regional and domestic politics (Stéphane Lacroix, Guido Steinberg, and David Roberts)? How does Iraq’s shaky future affect regional security challenges (Toby Dodge)? What drives the dangerous new sectarian strife in the region and can it be reversed (Fred Lawson, Richard Norton, and Fred Wehrey)? And, finally, do our currently dominant theories offer an effective guide to the region’s security politics (Mehran Kamrava) – and how should those theories be adapted in response to new developments?