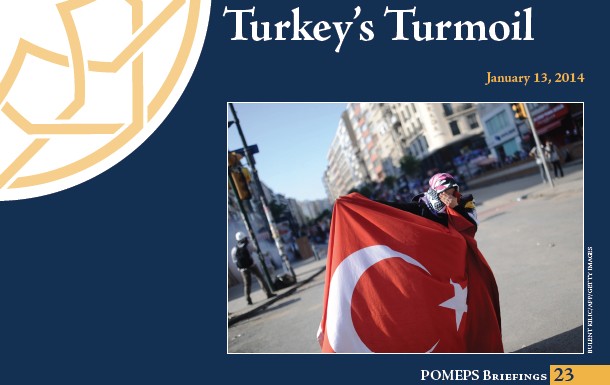 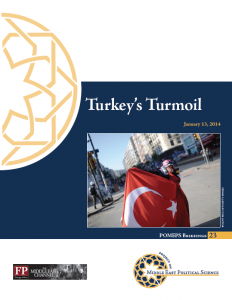 Turkey’s Prime Minister Recep Tayyip Erdogan occupied a dominant political position not too long ago. In June 2011, his Justice and Development Party (AKP) won nearly 60 percent of the seats in parliament while expanding its lead over its closest competitor. Turkey seemed well primed to take advantage of the Arab uprisings, with its independent foreign policy and criticism of Israel playing well with Arab audiences. Erdogan even seemed keen to find a resolution to the long-running struggle with the Kurdistan Workers’ Party (PKK) and reconcile with the country’s Kurdish citizens.

Those days seem distant indeed. For at least the last six months, Erdogan has struggled to respond to sustained popular protests, a growing corruption scandal, a stalled peace process with the PKK, a deeply unpopular and ineffective Syria policy, and dissent from within his own party. How did Erdogan’s fortunes reverse so quickly? Are his problems primarily the natural decay of a leader too long in power or do they speak to deeper problems with his party’s ideology or the foundations of Turkish democracy? The 14 deeply researched and analytically powerful Foreign Policy Middle East Channel essays collected in this POMEPS Briefing go deeply into the origins, dynamics, and likely implications of Turkey’s new political scene.

Growing discontent with Erdogan crystallized in June 2013 with the protests in Istanbul over a development project in Gezi Park and the heavy-handed response by the police. Some of the contributors to this briefing focus upon the protesters themselves. Whit Mason views the protests as the manifestation of an emerging secular middle class, while Aaron Stein points to growing battles inside the AKP. Almost all of the contributors agree on the novel nature of the protests: Murat Somer, for instance, highlights the generational change in the opposition, while Lisel Hintz details the political culture of the protesters and their strategic deployment of humor.

Other contributors focus on the pathologies of the Turkish political system. Sinan Ulgen argues that Erdogan’s failure to understand the depth of the discontent and his over-confidence in his own power led him to badly miscalculate his response. Quinn Mecham focuses upon the inevitable arrogance, corruption, and mistakes that follow from absence of accountability in a system so dominated by a single party. Steven Cook and Michael Koplow place the eruption of protests within a longer-term decay of Turkish democracy as Erdogan and the AKP consolidated their power and ruled by majoritarian decree.

Erdogan survived the Gezi Park protests, but — as Cook observed — as a much-diminished political force. The economic miracle over which he had presided, as Stein outlines, had given way to a currency free-fall and increasingly dire fiscal prospects. After dominating Turkish politics for so long, Henri Barkey notes, Erdogan had flown too close to the sun. A mounting corruption scandal forced him to shuffle his government in December 2013, and left him scrambling for political survival. As Noah Blaser points out, it would be foolish to underestimate Erdogan’s prospects of survival and even vindication. His opponents have yet to put forward a compelling alternative, and have few mechanisms to force the issue. But Erdogan seems unlikely to return to his former dominant position even if he clings to power.

Caught up in this political maelstrom has been the fate of Erdogan’s outreach to the PKK and effort to finally resolve Turkey’s Kurdish problem. Over the summer, PKK leaders told Jake Hess that they hoped for an end to the conflict, the release of prisoners, and the enactment of reforms such as the revision of the Anti-Terror law and the reduction of the electoral threshold to allow Kurdish parties to compete. At the end of September 2013, as Blaser reports, Erdogan announced a reform package which met some Kurdish demands but fell short of satisfying their aspirations. By December, Kurdish leaders interviewed by Chase Winter sounded pessimistic.

There is much riding on the ability of Turkey’s political institutions, new social movements, and embattled leaders to resolve these struggles within a democratic framework. We hope that the reporting and analysis collected in POMEPS Briefing #23: Turkey’s Turmoil helps to put these struggles into perspective.