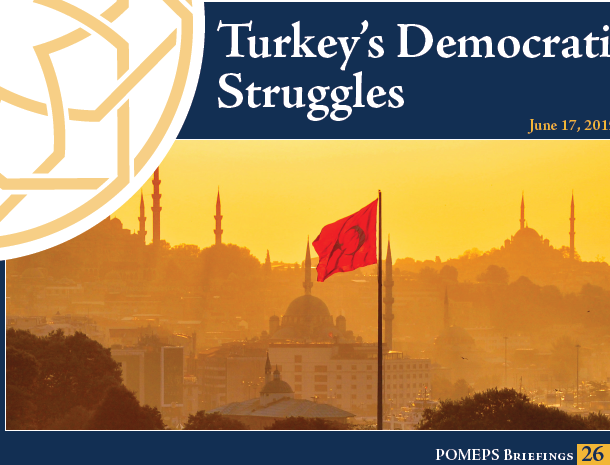 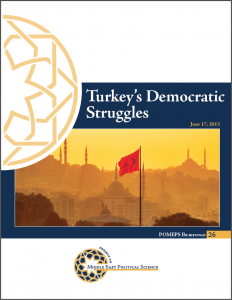 On June 7, Turkish voters denied a majority to the long-ruling Justice and Development Party (AKP) and pushed the Kurdish Democratic People’s Party (HDP) over the electoral threshold for the first time. A number of critical trends in Turkish politics came together in the June 2015 parliamentary election: President Recep Tayyip Erdogan’s authoritarian ambitions, Kurdish political evolution, an unpopular Syria policy and the stunning break between AKP and the Islamist Gulen movement. POMEPS Briefings 26 “Turkey’s Democratic Struggles” brings together more than a dozen essays published by the Project on Middle East Political Science and the Monkey Cage that help to make sense of the stakes and results of this crucial election.

AKP’s electoral setback has been widely interpreted as a repudiation of long-building efforts by Erdogan to amend the constitution and consolidate semi-authoritarian rule. Its defeat should be placed in context, of course. It still won the largest share of seats in the election, even if it failed to secure the majority to which it aspired. As Emre Erdogan and David Wiltse explain, it may still emerge victorious since no grouping of very ideologically different parties has yet been able to formulate a governing coalition. It could form a new coalition government on its own terms, or else send the country back to early elections.

In the year before the election, many observers worried that Erdogan’s authoritarianism and the opposition’s disarray could doom Turkish democracy. Turkey’s opposition went into the election cycle scarred by the 2013 repression of protests in Gezi Park and allegations of fraud in the March 2014 local elections. Dark warnings about Erdogan’s authoritarian ambitions circulated widely, with many convinced that the AKP clientelist juggernaut and the dysfunction of the opposition would turn the 2015 election into a referendum legitimating fundamental constitutional changes. An election, they worried, could undermine democracy. The resurgence of the opposition in this election, and particularly the success of the pro-Kurdish HDP, has at least temporarily dented this narrative and renewed some hope for the resilience of Turkish democratic institutions.

Other key political cleavages have taken on new meaning in this environment. Turkey’s Kurds have taken stock of the limitations of AKP’s Kurdish outreach and the opportunities and risks posed by the new status of Syrian and Iraqi Kurds. The HDP’s electoral success came in large part at AKP’s expense, while challenging the Turkish nationalist convictions of other major opposition parties. Meanwhile, AKP’s surprising break with the Gulen Movement split the potent Islamist networks upon which it long relied.