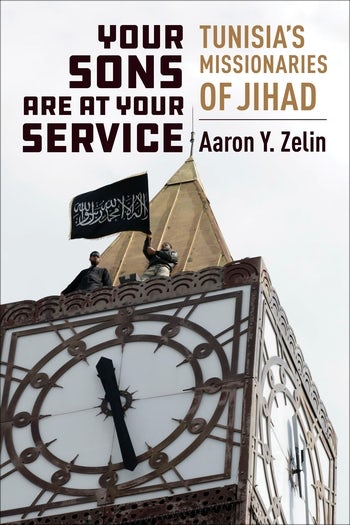 This week’s podcast is a conversation with Aaron Y. Zelin, who discusses his new book Your Sons Are at Your Service: Tunisia’s Missionaries of Jihad. In the book, Zelin explains how Tunisia became one of the largest sources of foreign fighters for the Islamic State— even though the country stands out as a democratic bright spot of the Arab uprisings and despite the fact that it had very little history of terrorist violence within its borders prior to 2011.

“I really wanted to understand that it was going on,” said Zelin. “Over time [Ansar al Sharia] started to grow and become more relevant and more people were attracted to joining it. At the time I didn’t think it would be like super big of a deal. But then years later —when people started to go to Syria to join up with Jabhat al Nusra and then later with the Islamic State— everybody like: ‘So many Tunisians in ISIS.'”

“For me, the most exciting part of this research was actually looking at what was going on before 2011. I think people generally have somewhat of an idea of what’s happened over the last decade, but a lot of things that happened prior to that I think helps explain where we’ve got to post-2011,” said Zelin. “Even though most people didn’t even realize Tunisians were actually involved in the anti-Soviet jihad in Afghanistan, or heavily involved in some of the recruitment and fighting in Bosnia— and even helping conduct stuff in Algeria as well.”

Zelin is the Richard Borow Fellow at the Washington Institute for Near East Policy and a visiting research scholar in the Department of Politics at Brandeis University. He is the founder of the website Jihadology.net, a primary source archive of global jihadi materials.