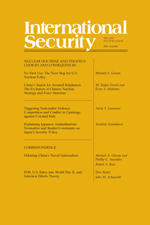 and others do not is of prime importance to both scholars and policymakers. However, this pressing question has not been sufficiently addressed, Adria Lawrence writes in the fall 2010 issue of International Security. In “Triggering Nationalist Violence: Competition and Conflict in Uprisings against Colonial Rule” Lawrence argues that nationalist actors turn violent when power vacuums lead groups to compete with one another.

Lawrence argues that the occurrence of nationalist violence is best explained by “competitive violence theory” – the theory that when a power vacuum occurs within a nationalist movement, the group splinters and sub-groups use violence to compete with one another. The leadership vacuum can eliminate those who would have held back violent actors or can cause different sections of the group to use violence to increase their popularity. Repression of the group’s leadership is a common, but not the only, cause of such a power vacuum.

Lawrence tests this theory with a detailed examination of the Moroccan independence movement where she argues that French repression of the peaceful nationalist movement’s leadership caused sub-groups within the movement to become violent. She tests this explanation against an alternative explanation that nationalists turned to violence not because of intra-group competition but rather because of their frustration about their inability to meet their nationalist goals. However, if frustration about meeting their goals was the primary cause of violence, sub-groups would not target one another and would cease their violence when their nationalist goals were met. However, in Morocco, urban groups and a rural group began to target one another instead of just the French. Additionally, violence continued after independence. Both of these circumstances lend support to the theory that the groups were using violence to compete against one another, instead of just using it to try to achieve independence.

Lawrence argues that intra-group fragmentation also led peaceful movements to turn to violence elsewhere within the French Empire, and that intra-group fragmentation may explain the adoption of violence in other times and places as well. As Lawrence highlights, the resulting policy lessons are confusing. Peaceful movements can bring down regimes; however, repressing them can also lead to more violence in certain cases. How to deal with these contradictory lessons presents difficult challenges for policymakers.

Download “Triggering Nationalist Violence: Competition and Conflict in Uprisings against Colonial Rule” from International Security if your university has access here, or email info@pomeps.org for assistance.