By Rana B. Khoury, Northwestern University

In the wake of multiple interstate conflicts through the 1990s, analysts came to associate refugees with violence and the spread of civil wars. Yet in six years of massive displacement from Syria, violence among refugees has been conspicuous in its absence. Indeed, case studies of refugee communities worldwide have indicated that refugees often engage in another form of politics: activism—non-routine and nonviolent action carried out on behalf of a cause (Martin 2007). Forms of refugees’ activism may include civic organizing and advocacy, humanitarian relief, and political institution building, among other engagements—activities that impact communities on both sides of the border of a civil war state.

Few quantitative studies capture this nonviolent form of political behavior, if any at the micro level—with good reason: activists typify a “hard-to-survey” population (Tourangeau 2014). Syrian activists in Jordan are hard to survey because there is no sampling frame of their population, their behavior is often informal and sometimes risky, and they are part of a displaced (mobile) population. Thus, to survey activist refugees in Jordan, I used a sampling and analysis method called respondent-driven sampling (RDS).

RDS has been specifically developed for the study of “hidden” populations in a manner that approximates probability sampling.[2] A network-based sampling method, sampling begins with the non-random selection of “seeds,” who recruit a limited number of their peers to participate, and the process repeats with each new wave of recruits, who are linked to each other through unique identification numbers. Assessments of respondents’ social network size generate an estimate for their inclusion probability, used as a weight in the statistical analysis and allowing for population inference with estimates of uncertainty.[3]

Combining RDS with qualitative methods has allowed me to follow the trajectories of activism among Syrian refugees in Jordan. From 2014 to 2016, dozens of interviews with activists created trust and in-depth understanding of their (often sensitive) trajectories; it also enabled the identification of activism as a behavioral characteristic and the networked nature of activists’ social lives. My unique phone-based survey, conducted in 2016, gathered systematic information from a broader swathe than basic snowballing techniques might have achieved, ultimately reaching 176 activists in Amman who self-identified as having engaged in political, social, or economic activism (nashāṭ) on behalf of the Syrian cause (min ajli al-qaḍīya as-sūrīya). Figure 1 illustrates the recruitment process. 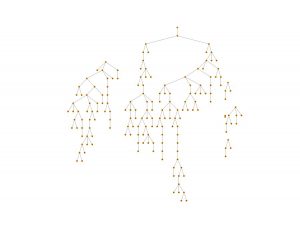 Figure 1: Beginning with five active seeds, sampling reached as many as twenty-one waves to achieve a sample size of 176 eligible and consenting participants (that is, 18 years or older, of Syrian origin living or working in Amman Governorate, had not previously engaged in the survey, and had engaged in activism on behalf of the Syrian cause since coming to Jordan).

Syrian displacement to Jordan began in late 2011 and increased dramatically in 2013 as the Syrian conflict became characterized by brutal struggles for territorial control by state and non-state actors increasingly penetrated by direct and indirect military intervention. The Jordanian government worked with the UN Refugee Agency (UNHCR), states, and numerous intergovernmental and international and local non-governmental organizations to respond to the humanitarian crisis. From the beginning, displaced Syrians in Jordan have engaged in activism on behalf of the Syrian cause to impact conditions on both sides of the border.

Syrian activists are generally a young and well-educated population. Inferring from my survey, over 70 percent of those in Amman are between the ages of 18 and 30 [95% CI: 48, 95], and two-thirds are men [54, 79]. Nearly 95 percent have completed at least a secondary education, and nearly half have completed tertiary education. An overwhelming majority identified with the middle class when they lived in Syria [77, 94]; none identified as lower class.[4] My qualitative research suggests that activists in Irbid Governorate, home to the second largest Syrian refugee population after Amman, share these characteristics with their capital-based counterparts. 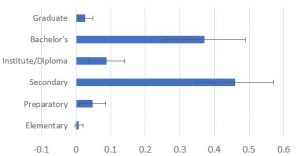 Where are they (from)?

The activist population in Amman hails from across Syria, with the greatest concentrations coming from Dar‘a Province (bordering Jordan) and Syria’s most populated provinces. Syrians are also engaged in activism across Jordan, perhaps especially in the urban areas where the vast majority of Syrians are settled. The camp population has engaged in contentious activity (see Killian Clarke in this collection); yet the structures of encampment likely mark off activism from its urban manifestations and the camps are, in any case, not in the purview of this study. 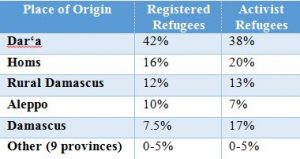 Figure 3: Place of origin of registered Syrian refugees in Jordan (Dec. 2016 figures from UNHCR) and of activist refugees in Amman Governorate

What do they do?

Prior to the Syrian uprising that began in 2011, only 20 percent of activist refugees had engaged in any form of activism [11, 31]. After the uprising began, nearly half of them did so [36, 58] before fleeing to Jordan. The scope of their activism since arriving has been wide, both in terms of type of activity and its target. The following are a selection of descriptions of each type of activism survey participants have been most recently and primarily engaged in:

Humanitarian Relief: “Finding and evaluating humanitarian cases, and putting them in touch with the appropriate parties that can provide assistance”

Advocacy: “I’m training in international law, regimes, governance, and leadership empowerment; we intend to work in institutions for civil awareness”

Development: “Working with adolescents, and serving on psychological counseling and empowerment projects for Jordanians and Syrians”

Media or Documentation: “I produce programs on the air that treat issues inside and outside of Syria”

Fundraising: “At the beginning of winter, we raise money from people for others in need and we purchase heaters and winter clothes for them”

Political Institution Building: “We support the local councils [opposition councils inside Syria] with projects and workshops”

Political Party Activities: “I am a member of the political office and head of media and communications; we support a political resolution to the conflict in Syria”

Other: “I write poems about the suffering of the Syrian people and their martyrs. I publish it on Facebook and elsewhere; one poem received an award and was published in a book” 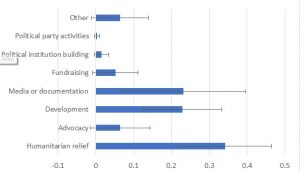 Figure 4: Form of activism most recently engaged in

Unlike large social movements, activism does not hinge on mass participation. Nor is it understood here to include “one-off” events such as signing a petition. Rather, activism involves a moderate level of cooperation with actors who are primarily in the refugee host state, including other activists, NGOs, diplomats, and members of the host community. Three-quarters of activists are engaging on a volunteer basis [64, 86],[5] reflecting legal constraints on refugees’ employment and the non-conventional nature of activism; displaced people are generally excluded from formal institutional channels, and yet they practice agency.[6] Over 80 percent work with other Syrian activists [72, 93], who are mostly also in Jordan [51, 76], but over one-third of whom are in both Jordan and Syria or only in Syria.

What don’t they do (anymore)?

The nature of activism among Syrians in Jordan has not been constant. As the violence in Syria has worsened, and the international humanitarian response in Jordan has swelled, I contend that activism has transformed from a grassroots response to an uprising into an aid-based response to a humanitarian crisis. This adaptation does not necessarily map onto the trajectory of each individual activist, but rather suggests a general process whereby activism is increasingly constricted to humanitarian endeavors. This trend is evident among the survey population.

Over the course of their years in Jordan, Syrians have been engaged in more varied forms of activism than they were at the time of the survey in late 2016. Past activism included more participation in political work, including political institution building (usually of opposition governance bodies), advocacy, and protests (in which none are involved anymore). Fundraising—a grassroots effort—also loses ground in a formal and expansive organizational landscape. In its most recent iteration, humanitarianism, development, and media account for fully 80% of activism. 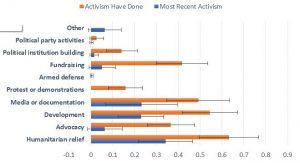 Figure 5: Activism since coming to Jordan in orange, compared to most recent activism in blue.

These trends and perceptions reflect the evolving and protracted nature of the conflict in Syria and the expansion of the humanitarian response in Jordan. As the Syrian conflict evolved, rebels’ territorial control in Syria and security concerns in Jordan shaped activist potentialities. Consider the opposition Dar‘a Governorate Council, headquartered (and thus tolerated) in Jordan but which later moved to rebel-held territory inside Syria. Another governorate-wide group, one closely associated with the Muslim Brothers, was proscribed by Jordanian authorities around the same time.

Grassroots endeavors—even humanitarian ones—are also subject to constriction by the impulses of securitization and humanitarianization. In 2014, activists in Irbid, for instance, saw their medical clinic serving “martyrs” (rebels wounded in battle) closed by the Jordanian authorities. Yet around the same time Medecins Sans Frontieres, an INGO, was expanding its operations in Irbid to serve Syrian refugees. To date, more than sixty IOs and I/NGOs have become partners with the UN in its Refugee and Resilience Response Plan (3RP 2016) in Jordan. Many of these partners are the organizations that two-thirds of Amman’s activists are collaborating with [54, 78], while just one-third are working informally with friends or by themselves. External sponsorship for media organizations is apparently also abundant, helping explain the prevalence of media activism and the sense among many activists in Amman that “everybody is a journalist now.”

Syrian activists are hopeful about their impact: more than 96 percent believe their work to be at least somewhat effective among its target population. If displaced Syrians are practicing agency and mobilizing during the crisis, and acquiring the skills to rebuild in the future, we have reason to be hopeful too. But we might also consider the consequences of activism’s transformation from the grassroots to an aid-based or even aid-dependent component of “new humanitarianism,” that is, humanitarianism that goes beyond emergency relief to include conflict resolution, reconstruction, and transformations in social processes.[7]

In peacetime contexts, aid and “NGOization” can tame and professionalize political activism.[8] Indeed, creating technocrats to solve technical problems may be altogether “antipolitical.”[9] Already, the Syrian conflict is characterized by very little (productive) political or diplomatic intervention, but abundant military and humanitarian intervention. In this context—and perhaps because of it—activists are not fomenting mass mobilization to dismantle power structures; rather, they are responding to the war as a humanitarian crisis. Noble as this work is, it may also be testimony to the tragedy of the Syrian uprising.

Rana B. Khoury is a PhD candidate in political science at Northwestern University.

[1] This research was generously supported by the Council of American Overseas Research Centers and the Kellogg School of Management at Northwestern University.

[3] Additional information on RDS as a sampling method and the assumptions made in inference (Salganik and Heckathorn 2004, Gile, Johnston, and Salganik 2015).

[4] Over 90 percent of Syrian refugees living outside of the camps in Jordan live below the poverty line (3RP 2016).

[5] Qualitative interviews suggest that volunteerism is not necessarily unpaid. Activists sometimes receive forms of compensation such as generous travel stipends.