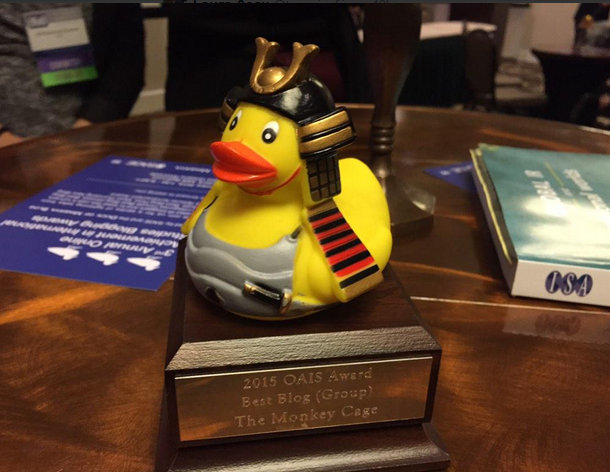 Congratulations to the entire Monkey Cage team for being named Best Blog (Group) at the 2015 OAIS Blogging Awards a.k.a., the Duckies!

Middle East coverage has been quiet this week as the POMEPS Monkey Cage editors (and many contributors) have been busy at the International Studies Association’s (ISA) Annual Conference. Thanks to all the ISA attendees who stopped by the POMEPS reception last night. It was great to meet new folks and catch up with old friends, contributors, and TRE grantees. We’re already looking forward to our next reception at the American Political Science Association’s Annual Meeting in San Francisco, September 3-6. Now, this week on Monkey Cage:

Omar Ashour of Exeter University reflects on lessons learned from deradicalization programs in Libya and beyond — timely lessons as the White House hosted the Summit on Countering Violent Extremism this week.

Bonus: If you’ve been following our “Islamist Politics in the Shadow of the Islamic State,” symposium,  you’ll want to read new insights on Congo’s Islamist rebels from Daniel Fahey of UC Berkeley.