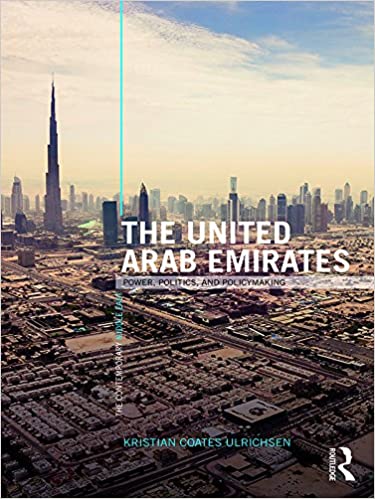 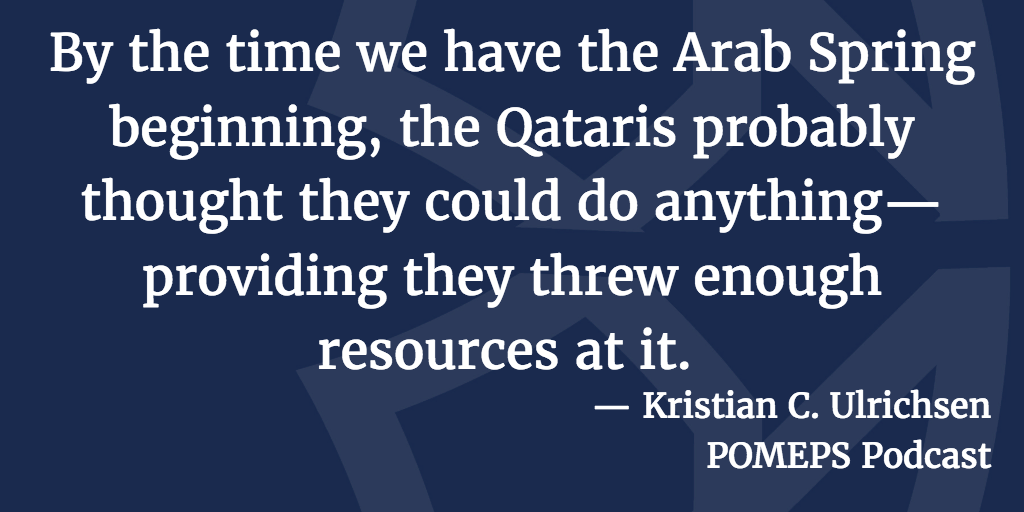 Kristian Coates Ulrichsen speaks about the crisis within the GCC with Marc Lynch in our first POMEPS podcast in the launch of our fall season. Ulrichsen is a fellow for the Middle East at the Baker Institute for Public Policy at Rice University in Houston. His latest book is The United Arab Emirates: Power, Politics and Policy-Making.

Ulrichsen explains this summer’s diplomatic showdown in historical context. “We’ve been here before. Like many other people, I was taken quite by surprise when this whole crisis erupted again. I had thought that the Qatari decision in September 2015 to send a thousand troops to Yemen signified the return of Qatar to the GCC fold.”

“Clearly if you are looking at the timing, you had President Trump visiting Riyadh on May 21st. You had the alleged hack the Qatar news agency on May 23rd. So people positive that there may be a linkage there. The president himself alluded to a linkage in his tweets on the second day of the crisis, when he suggested that these issues have been discussed in Riyadh and it was a welcome decision for the Saudis to use to make that move. So the president himself seemed to draw a link between what may or may not have been said behind closed doors in Riyadh and the subsequent Saudi-Emirati move on Qatar in June. We had a two-week period up to May 23rd, before the formal measures on the 5th of June, where you had a media campaign of increasing intensity in Saudi and Emirati media casting Qatar in all manner of negative terms— of a friend to all number of destabilizing groups across the Middle East. And that campaign may have been designed to lob in a few hand grenades into the Beltway echo chamber, so that when decisions were taken people would think— who might otherwise not so much not know so much about Qatar— might just think, ‘Well, I’ve heard a lot about this recently. This does sound like a troublesome little country that needs to be told it’s got to change.'”

Ulrichsen continued, talking about Qatar’s policies from the 1990s to today.

“I think Qatar realizes that they have to ensure that they have partners around the world who they could rely on— and do so in the most important way— energy security. But then also the fact that if Saudi were to really have domestic instability, you would need those external partnerships more so than your neighboring or regional ones as well. And again, comparing and contrasting the aging leadership both in Saudi Arabia, but also in Egypt and other parts of the Arab world, with the fact that the technological change offered Qatar a space in which they could move. They felt, I believe, that it was almost like a vacuum of leadership beginning to emerge in the Arab world after the 1990s, with Egypt looking inward to Mubarak with the Saudi leadership aging of course King Fahd being incapacitated and then Abdullah taking power at the age of 80. And they felt this was a way they could actually begin to try to spread their own networks of influence and leverage in ways that they could begin to actually make more of an impact in soft power. Thinking that the way that power is becoming increasingly diffuse allowed them is an opportunity to overcome territorial constraints.”

“The fact that Qatar is, after all, a tiny state— but clearly with a lot of leverage that can amplify their message.”

Ulrichsen also explains the impact of the Arab Spring on Qatar.

“Hamad bin Jassim really became prominent in building up Qatar’s liquefied natural gas capabilities, using natural gas to create long-term linkages with partners around the world. And then utilizing those revenues to become more of an assertive actor in regional and foreign policy. In 2010, Qatar wins the rights to the World Cup in 2022. Qatar’s self-confidence is at its peak in December 2010, two weeks before Mohamed Bouazizi set himself on fire, Qatar had won the rights to the World Cup. So by the time we have the Arab Spring beginning, the Qataris probably thought they could do anything— providing they threw enough resources at it. So that’s where we see the breakout moment for Al Jazeera, for Qatar’s policies towards Islamism, feeling much more comfortable with the pace and direction of change.”

Looking at other countries in the GCC, Ulrichsen says, “What Qatar and the UAE should show any students or scholar of Gulf politics that there’s no one size fits all policy. On the outward appearance, you have two very similar states but of  almost diametrically opposed policies. So looking at things through the prism of rentier states— or just of simple importance of energy to the economic relationship— misses so much underneath the surface.”

Read More from Ulrichsen:
What’s going on with Qatar?
The Gulf’s Demands on Qatar Look Designed to Be Rejected
Qatar: The Gulf’s Problem Child