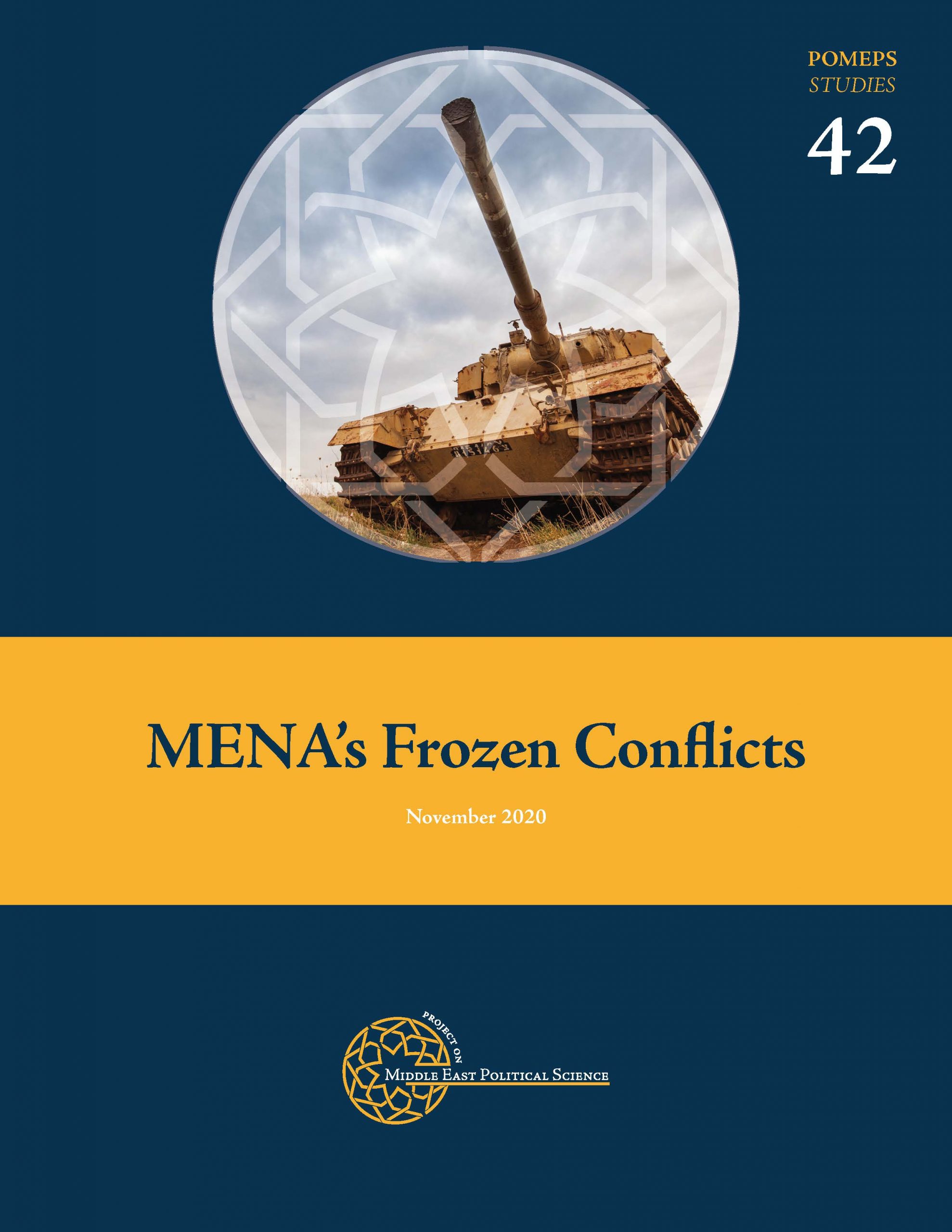 The multiple wars, popular uprisings, and domestic conflicts cutting across the Middle East and North Africa today should be understood as a new normal. The tumultuous past decade only seems like an aberration because the political development of the region, in many ways, was frozen from the late 1970s until the 2000s. But before a deluge of oil rents from 1973-1986 dramatically strengthened states and regimes, domestic politics in the region were similarly tumultuous. Today, oil prices are lower and states are relatively weaker relative to their societies. The oil-coated ice age is over, and the great (but slow) thaw of the past three decades should be understood as a durable shift in governing authority in the region. Looking back, we will come to see the 1970s-2010 period of authoritarian stability as the true anomaly in the region’s history.

The Freezing Point of Oil

Before 1973, political development in the contemporary Middle East was dynamic. Leaders rose and fell. The transfer of power through the use of military force was relatively common. Iraq, for example, witnessed successful coups in 1936, 1941, 1958, two in 1963, and 1968. Many more coup attempts floundered. Transnational ideologies – especially varieties of Arab nationalism – flourished and spread across borders. Real political parties, many with broad appeal, were founded. Both global and regional powers intervened in other states’ domestic affairs.

That all changed, beginning in 1973. After several decades of hovering around $24, the inflation-adjusted price of a barrel of crude oil doubled in January 1974 and then doubled again in 1979. As Figure 1 shows, high oil prices continued until 1986, when they crashed down to the low $30s. For the next decade and a half, prices largely remained in the $30-$40 range, until a steady climb began in late 2003, after the U.S.-led invasion of Iraq. A periodization of the political development of the Middle East can be arranged around those numbers. 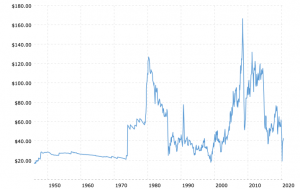 With oil rents – including those transferred from oil-rich states to relatively oil-poor ones via state and private aid and investments, loans, and remittances – governments built robust welfare systems alongside pervasive and overlapping security and intelligence apparatuses. Governments throughout the region provided free or inexpensive education and healthcare, public sector jobs, pensions, and subsidized food, electricity, and fuel. Eva Bellin emphasized how access to extraordinary rents from oil, gas, and geostrategic location allowed states also to generously fund coercive apparatuses.[2] She wrote about the robustness of authoritarianism in the Middle East, but her piece could just as well have focused on the robustness of authoritarians instead of authoritarianism.

If you were a leader in power in the Middle East by the mid-1970s, you (or your son or other designated successor) likely was still there in 2010. When Zine El Abidine Ben Ali was forced out as president of Tunisia, the average age of the extant regimes in the 21 polities of the Middle East was 43 years.[3] Yes, there was a revolution in Iran and civil war in Lebanon in the 1970s, and some regimes were long-lived before the rise in oil prices. But regime and leader durability became pervasive during this period.

Flush with resources, states bought acquiescence from their populations and developed ways to monitor society and limit the spread of information. With only a few exceptions, states became domestically strong in the sense that central governments were able to exercise significant effective control over society.[4] Political development was frozen in several important ways: regimes and leaders calcified; coups ceased; parties were controlled; and states’ interventions into other states’ domestic affairs were largely curtailed.

The spread of Islamic political movements during this period is often attributed to the failure of alternative ideologies, especially pan-Arabism(s), after 1967. But an alternative explanation is that such movements had comparative advantages, relative to other movements, during the ice age when states were strong. These advantages include their control over or access to physical spaces with de facto autonomy from state control and an ability to couch recruitment and activism in a language that was hard for regimes to effectively monitor and control.

Although oil prices had declined steadily from their high in early 1980, Figure 1 shows that prices during the so-called “oil glut” of the 1980s remained far above their pre-1973 average until 1986, when prices collapsed to below $30 (adjusted for inflation). Prices largely remained in the $30-$40 range until after the U.S.-led invasion of Iraq.

The crash in oil prices in 1986 sent ripples throughout the region. Oil rents plummeted; exports to Gulf states decreased; flows of foreign aid, investment, and remittances dried up. The first signs of a thaw in the region’s frozen political development occurred in states with the lowest amount of oil rents. Jordan, for example, was one of several governments that had to borrow extensively to cover expenditures. Jordan experienced a severe financial crisis and resorted to structural adjustment. Political changes seemed imminent and parliamentary life resumed and meaningful elections were held in 1989. Other factors certainly played a role in the economic crises of the late 1980s and popular mobilizations that followed, but the decline in oil prices created the conditions for change.

States gradually were weakening in the sense of having less control over their populations. Governments had fewer resources to fund welfare states and coercive apparatuses. And the rise of satellite television and the spread of mobile phones and the internet increased people’s access to information and made it easier to mobilize. Gause traces what he calls the “new Middle East Cold War” to changes in state weakness. He sees the U.S invasion of Iraq as a key moment, when new “playing fields” for international competition were opened up. [5] But it was the 1986 oil crash and the later spread of information technologies that started the reversal of Arab state strengthening that had begun in the 1970s. Frequent and large protests had become commonplace in some countries throughout the 2000s. One study, for example, found that over two million Egyptian workers engaged in 3,239 strikes and other forms of protest from 2004-2010.[6] Gause is among several scholars[7] who have directly compared the regional power struggles in the Middle East today to the pre-1970s era famously analyzed by Malcolm Kerr and Patrick Seale.[8] But there is a tendency to see this comparison through the prism of international rivalries and “balance of power theory” and largely ignore the insights that the domestic struggles of the earlier period might reveal about today. Gause makes the important point that Iran’s and other states’ ambitions were held in check prior to 2003 by a lack of opportunities to spread their influence. But an underexplored part of the story is why some local actors are willing to accept foreign support and able to survive after having accepted it.

Back to the Future

In the 1990s, following the collapse of oil prices, the Middle East seemed to be entering a period of economic and political liberalization and possibly even of democratization. The zeitgeist of the time is captured in prominent political science work such as the edited volumes on Political Liberalization and Democratization in the Arab World (1995, 1998); Dick Norton’s Civil Society in the Middle East program and its edited volumes; and Democracy Without Democrats? The Renewal of Politics in the Muslim World (1994). By the early 2000s, it was clear that authoritarians and authoritarianism both remained robust, although they faced increasingly mobilized and networked populations. Political scientists reinterpreted the “democratization” of the 1990s in a wave of literature on how seemingly democratic institutions can strengthen authoritarianism (Ellen Lust’s work is an exemplar). Much of the early analyses on the Arab Spring or Uprisings is similarly unlikely to age well; volumes like this one are part of the reevaluation of the past decade and what we thought we understood.

The overthrow of Ben Ali and beginning of the Arab Uprisings accelerated processes already underway. The political development of the region is now unfrozen; the Middle East has witnessed as many regimes change in the past decade then it did in the previous three decades combined. The multiple wars and conflicts cutting across the Middle East and North Africa is a new – or, perhaps, not-so-new – normal: “normal” in the sense that there will be some amount of regime churning, and civil conflicts will occur and persist. States are not disintegrating in the sense that borders are breaking, and partitions remain unlikely. The comparative advantages of political Islamists are less of an advantage today than they were during the previous frozen decades; they have a future, but a constrained one.

Political development is messy, uneven, and non-linear. Conflict and political instability in today’s Middle East is not an aberration, a temporary transition to something else, or a hangover of the Arab Uprisings. The roots of the present instability are structural; there has been a durable shift in governing authority in the region. This is the equilibrium.

[3] The 21 include the obvious countries plus the PNA, Israel, Iran, Turkey, and Sudan. Only the regimes in Algeria, Lebanon, Sudan, the PNA, and Iraq were established in the 1980s or later.

[4] Gause usefully differentiates the idea of being a “domestically weak state” from one that is relatively weak in international power or influence. He gives the example of Kuwait, a state that is strong in terms of state-society relations but still unable to defend itself versus external enemies. Gause III, F. Gregory. 2014. “Beyond Sectarianism: The New Middle East Cold War.” Brookings Doha Center Analysis Paper 11 (July), p. 8. https://www.brookings.edu/wp-content/uploads/2016/06/English-PDF-1.pdf

[6] Beinin, Joel. 2011. “Workers and Egypt’s January 25th Revolution.” International Labor and Working Class History 80, 1:189-96. The data are based on collective actions reported in the media and coded by the Land Center for Human Rights. If a series of actions over a dispute in a workplace are counted as one action, the number is 2716 for the period 2004-2010.