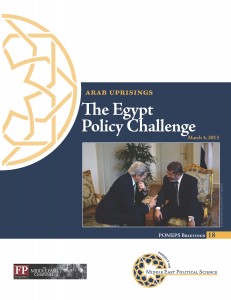 U.S. Secretary of State John Kerry’s visit to Cairo this weekend laid bare some of the deep limitations of U.S. policy toward Egypt. Kerry struggled to find a bridge between supporting a staggering Egypt and pushing it in a more democratic direction. The hotly polarized political environment in Egypt made such a balancing act excruciatingly difficult, as some prominent leaders of the opposition refused to meet with him publicly (although Mohamed ElBaradei found time for a phone call and Amr Moussa sat down with him off-camera) and protestors angrily denounced U.S. policy.

Kerry announced $250 million in immediate economic assistance, including a new $60 million Egyptian-American Enterprise Fund. He said many of the right things about U.S. priorities, pushing President Mohamed Morsi to compromise and the opposition to participate in the elections. His statement on the trip made clear that “more hard work and compromise will be required to restore unity, political stability and economic health to Egypt. The upcoming parliamentary elections are a particularly critical step in Egypt’s democratic transition. We spoke in depth about the need to ensure they are free, fair and transparent. We also discussed the need for reform in the police sector, protection for non-governmental organizations, and the importance of advancing the rights and freedoms of all Egyptians under the law — men and women, and people of all faiths.” Read more…