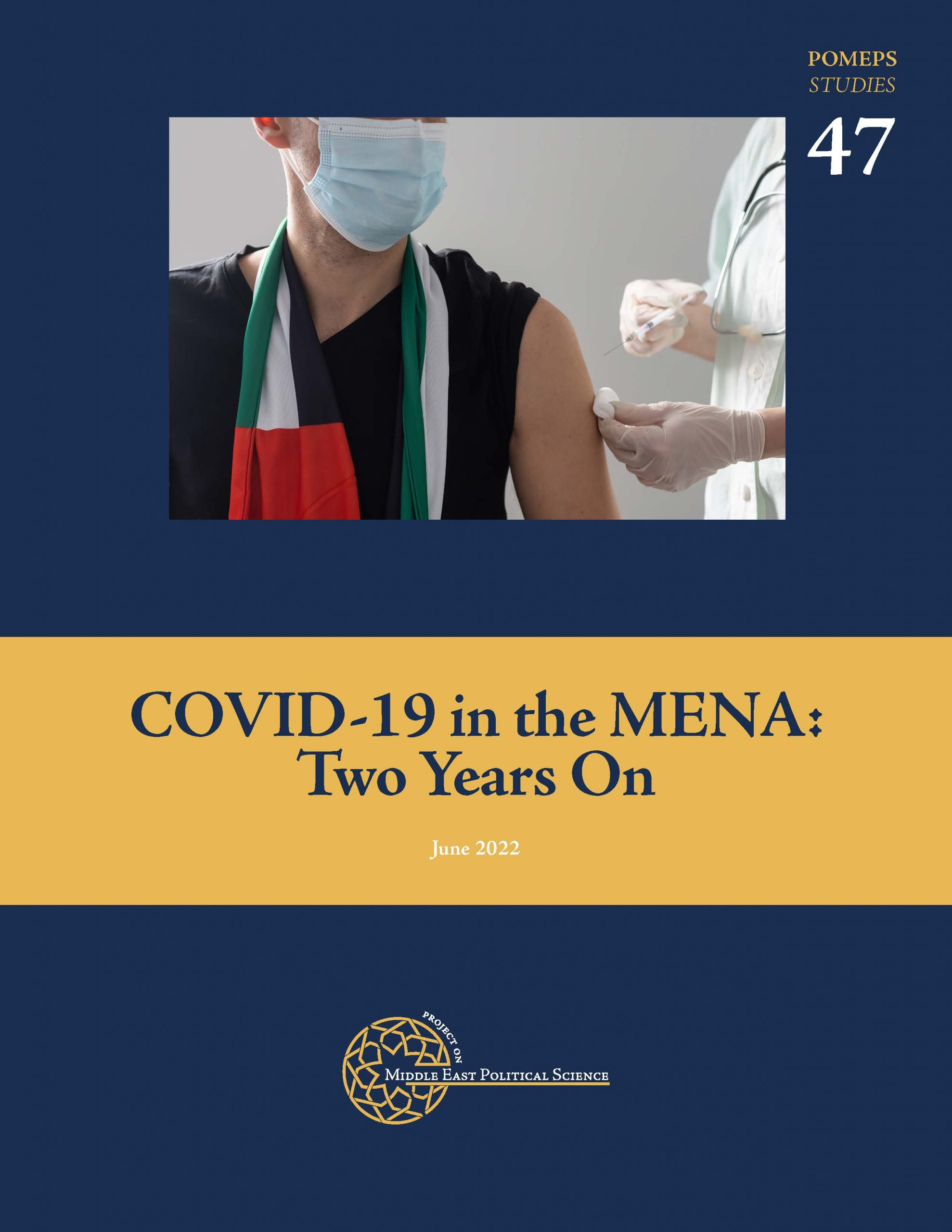 State responses to COVID-19 have engendered fears of expanding authoritarian rule around the globe. Over the last two years, heightened repression, militarization, and restrictions triggered by the pandemic have led to various types of regimes’ violation of democratic standards, from full and flawed democracies to competitive authoritarian systems and absolute monarchies. The Freedom in the World score dropped by 45 points in 2020, marking the most significant decline in the last fifteen years.[1] This trend has given rise to renewed scholarly interest in democratic backsliding, also known as de-democratization, meaning the gradual decline of democratic norms within democracies (see Figure 1).[2] 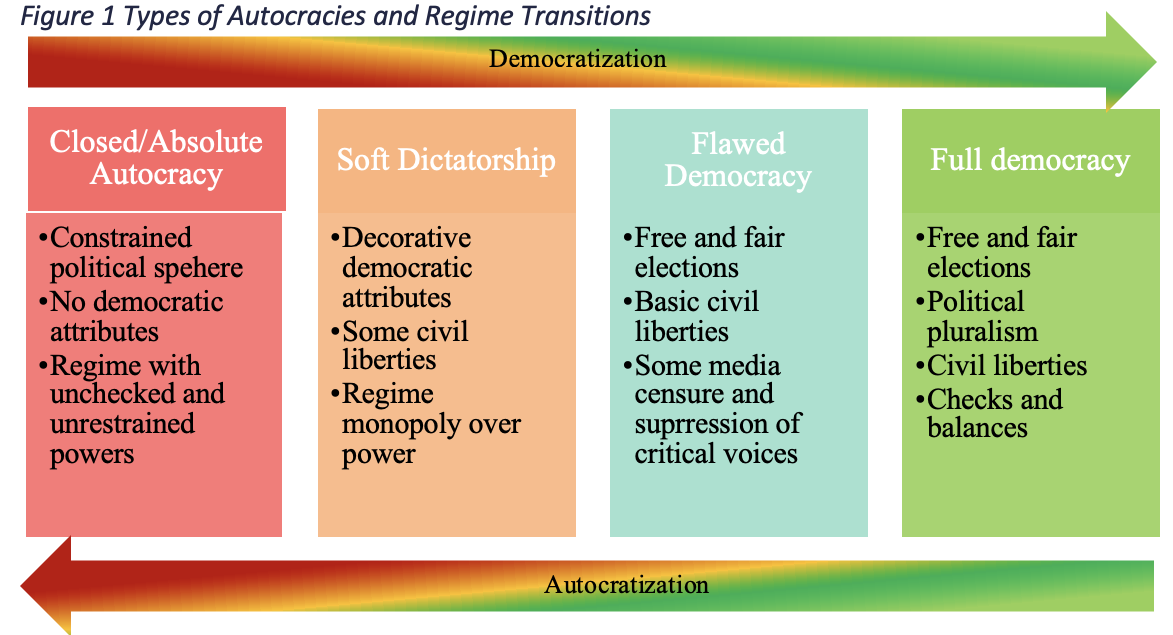 Alarmed by the de-democratization of five regimes globally from 2020 to 2021 and by the occurrence of violations of democratic norms in full democracies like the United States and France, recent research delved into the impact of COVID-19 on democracies.[4] Less attention has been paid to further autocratization in authoritarian systems, even though dictatorships are especially vulnerable to adopting autocratic practices during crises, given their struggles with low legitimacy, overreliance on coercion, and regime monopoly over power. In fact, autocracies comprised 36 of the 57 countries that recorded moderate violations of democratic standards during the pandemic and 30 of the 44 that recorded major violations.[5]

Focusing on the Middle East and North Africa (MENA), which is home to the largest concentration of dictatorships in the world, this essay builds on data from the Varieties of Democracy’s Pandemic Backsliding Project, the Economist Intelligence Unit’s Democracy Index, and Freedom House to examine how state response to the pandemic impacts autocratization in authoritarian contexts. It further leverages media analysis of reports of state-sponsored violence during the pandemic to categorize state responses that violate democratic norms and distinguish between measures that have led regimes to further autocratize and those that are merely part of their crisis management. It finds that, as the global health crisis empowered autocratic regimes to take on extraordinary powers, their response exacerbated existing autocratic practices, thereby amplifying authoritarianism. Interestingly, this could be seen across a spectrum of authoritarian states, and it manifested through what this essay qualifies as active and passive backsliding.

The Middle East and North Africa – already the lowest-ranked region according to the Economist Intelligence Unit’s (EIU) Democracy Index – saw its annual score decline from 3.53 in 2019 to 3.41 in 2021 (on a scale of 0-10, where these scores measure the quality of democracy from 1, autocratic to 10, full democracy). This decline, mainly driven by backsliding in Tunisia and Lebanon, falls in line with a decade-long downward trend. In fact, the region’s score is now lower than it was prior to the 2011 uprisings when some MENA regimes temporarily moved away from authoritarianism leading to a short-lived improved score. However, it can be difficult to assess further autocratization in dictatorships from year-on-year datasets. This is because drops in global democracy and freedom rankings where regimes already have a low base may seem negligible. 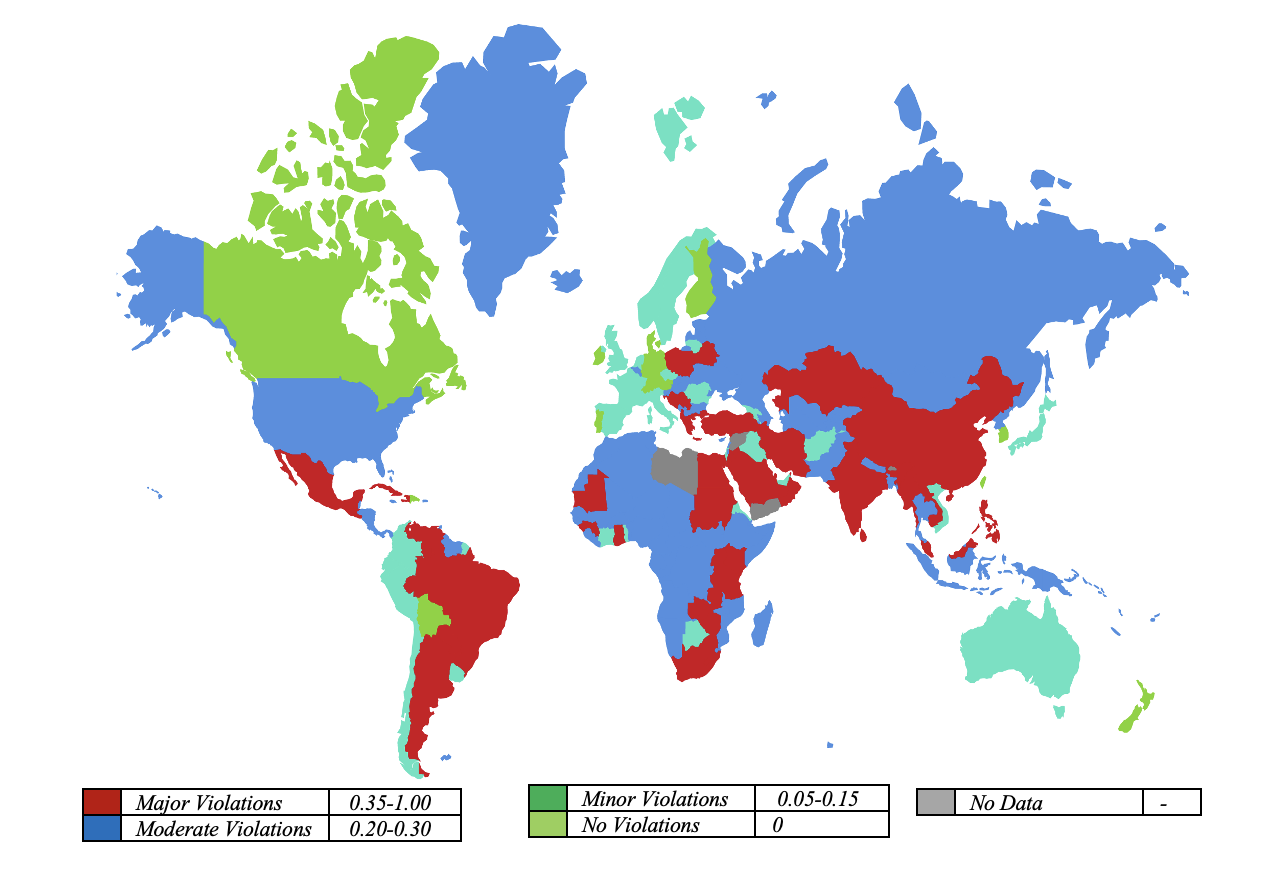 Author’s map using data from the Pandemic Backsliding Project, which tracks the impact of state responses to COVID-19 on the quality of democracy in 144 countries between March 2020 and June 2021.

Many MENA states experienced a rise in authoritarianism during the pandemic. This was seen across different categories of authoritarian regimes, from those closed autocracies where the public sphere is highly constrained, like Saudi Arabia and Oman, to non-absolute regimes that boast a minimum democratic component like Morocco and Algeria. Even the region’s then single nascent democracy, Tunisia, reverted to an electoral autocracy in 2021 and is further autocratizing as President Kais Saied tightens his hold over state power. This is corroborated by data from the Pandemic Violations of Democratic Standards Index (PanDem), which measures different types of violations of democratic norms due to the pandemic between 2020 and 2021 (see Figure 2). According to this data, the MENA region was the only one whose countries unanimously experienced moderate or significant violations; and MENA countries saw the consistently highest averages of violations since 2020.

Categorizing Pandemic Backsliding in the Middle East and North Africa

In the first, attributes of authoritarian regimes led to exaggerated or mishandled crisis management measures, which eventually resulted in backsliding. During the pandemic, this was seen when authoritarian regimes, which generally suffer from overreliance on coercion and overcentralized decision-making structures, over-deployed police forces, leading to excessive use of violence and took epidemiological, security, and economic decisions in a non-transparent manner. [6] For example, the borders in Morocco were shut down with little prior notice, and curfew-related decisions were announced on the day, often close to midnight.[7] In Algeria, emergency funds were made available to provide relief for citizens, but the distribution process was opaque and lacked follow-up.[8] In another example, the deployment of security forces and, in some cases, the militarization of pandemic response led to excessive use of violence, especially against crowds and protestors.[9] In Bahrain, riot police brutally repressed prison protests in April 2021 using batons, stun grenades, and solitary confinement. Similarly, Iranian authorities used live ammunition and tear gas against prison protests in April 2020; 36 prisoners may have been killed.[10] In Jordan, police officers used teargas to disperse protests against the imposed curfew in March 2021; furthermore, thousands of riot police were deployed to respond to said curfew violations. 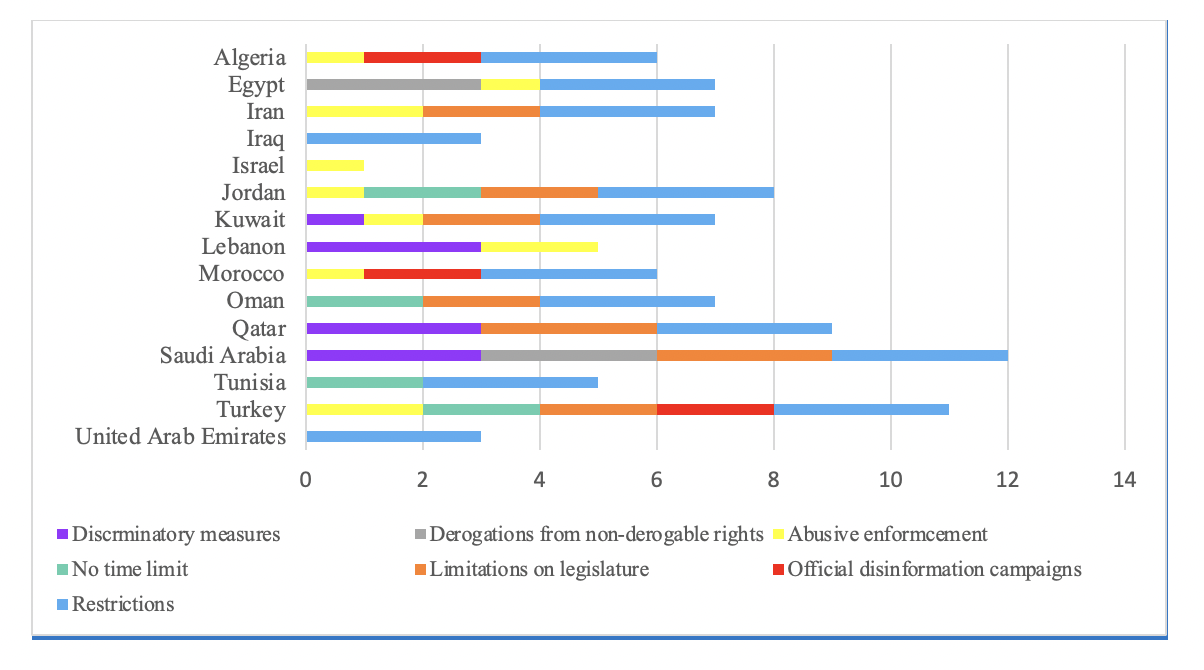 Author’s graph using data from the Pandemic Backsliding Project, which tracks the impact of state responses to COVID-19 on the quality of democracy in 144 countries between March 2020 and June 2021.

While both democracies and dictatorships experienced violations that led to passive backsliding, autocracies took advantage of the crisis to actively constrain citizens and institutions. In fact, different categories of authoritarian regimes, from absolute monarchies to soft dictatorships, adopted measures that led to active backsliding. Across the board, civil and political freedoms were curtailed.[11] This was especially apparent concerning freedom of expression, media censure, and physical violence against protesters. In Iraq, Kurdish security forces detained and used electric shock batons and beatings against journalists covering protests pandemic restrictions in June 2020.[12] In Algeria, where mass mobilization had been ongoing when the pandemic hit, the military regime took advantage of the crisis to deploy the coercive apparatus against protesters and used curfews to contain the gatherings.[13] Critical voices experienced a significant crackdown in Turkey and Tunisia as the authorities criminalized fake news, banned protests, and targeted activists.[14] As Nazir (2022) overviews, migrants’ already harsh living conditions in the Gulf deteriorated further.[15] Religious persecution increased in Saudi Arabia and Egypt since the start of the pandemic.[16]

Along similar lines, regimes exploited the health crisis to extend their powers and diminish checks and balances, severely weakening institutions. They did so by expanding the executive power through states of emergency laws, dissolving and restricting parliament, enacting emergency laws unnecessarily, infringing on the independence of the judiciary, taking over governmental positions, and single-handedly putting together or dismantling advisory structures. In Tunisia, Kais Saied carried out a coup by freezing parliament, dismissing the prime minister, and began to rule by decree.[17] In Jordan, the regime presented parliament with a series of amendments (later on passed by parliament) that allow the king to make or dismiss important appointments by royal decree and without consultation and allow for the formation of a council headed by the king will hold expansive powers.[18] In Morocco, Palace-backed institutions like the interior and foreign affairs ministries took control of the health crisis management, thereby distancing the prime minister and government from the situation.[19] In Egypt, where the military’s powers were reinforced through constitutional amendments immediately before the pandemic, the regime used the pandemic to further extend the military’s role in the political sphere by expanding emergency powers that had been in place since 2017.[20] This, in turn, has constrained various freedoms (of expression, assembly, and organization).

Conclusion: What the Pandemic Can Teach Us About Authoritarianism

Two years of COVID-19 have undoubtedly contributed to the deterioration of political freedom and opening both globally and within the MENA region. Closely examining and categorizing authoritarian practice during the pandemic in regions where autocratic systems prevail raises three points for scholars of authoritarianism to consider: response measures amplify authoritarianism, authoritarian regimes struggle with active and passive backsliding, and different authoritarian categories experience similar autocratization.

State response to the pandemic in the Middle East and North Africa acted as an amplifier of authoritarianism by exacerbating issues with which MENA countries, and authoritarian states in general, have struggled for decades. Indeed, the global health crisis empowered autocrats to take on extraordinary powers and carry out different types of violations of democratic norms, including weakening institutions, curtailing freedoms, over deploying the coercive apparatus, and obscuring the decision-making process. This trend is not surprising and was foreseen in the political science literature on crisis management in democratic versus authoritarian regimes.[21]

Perhaps more striking is that different autocracies adopted similar authoritarian practices that led to active backsliding, from absolute monarchies to soft dictatorships and electoral autocracies. Similar repressive responses were seen in countries we may expect to act differently from one another. There was religious persecution in Saudi Arabia and Egypt, harsh repression of protests in Iran, Bahrain, and Tunisia; an expansion of executive power in Jordan and Tunisia; and targeting of critical voices in Bahrain, Algeria, and Iraq. This suggests that regime type under the authoritarian umbrella does not impact repressive regime response during crises as some might expect.

Is pandemic backsliding unique to the Middle East and North Africa?[22] Did it take place only in autocracies? India, the world’s most populous democracy, saw its Freedom House ranking drop from “free” to “partly free” in 2021 due to a significant crackdown on critical voices and opaque decision-making during the pandemic. Hong Kong has experienced heightened repression and restrictions on its legal autonomy by the Chinese regime. Like Egypt and Saudi Arabia, India also experienced rising religious persecution since the start of the pandemic. As they had in several Gulf countries, migrants found their already tough circumstances deteriorating in Mexico. As had happened across most of the MENA region, authorities targeted crowds during protests in South Africa. This was not a MENA-specific phenomenon; a global deterioration in civil and political freedom took place during the pandemic, which missed no region or regime type.

[7] Abouzzohour, Yasmina. 2020. “One Year of COVID-19 in the Middle East and North Africa: The Fate of the ‘Best Performers’.” WashingtonD.C.: Brookings. https://www.brookings.edu/blog/order-from-chaos/2021/03/22/one-year-of-COVID-19-in-the-middle-east-and-north-africa-the-fate-of-the-best-performers/.

[10] See Abedini (2022) for an in-depth account of repression in Iran during the pandemic.

[20] Hofmann, Amadea. 2021. “The Consolidation of Authoritarianism in Egypt: A Systematic Erosion of the Rule of Law.” Rule of Law Journal 2, no. 1.

[21] Chan, Hin‐yeung. 2013 “Crisis politics in authoritarian regimes: how crises catalyse changes under the state-society interactive framework.” Journal of Contingencies and Crisis Management 21, no. 4: 200-210.

[22] See Kubinec (2022) for a comparison of repressive government responses in different regions.