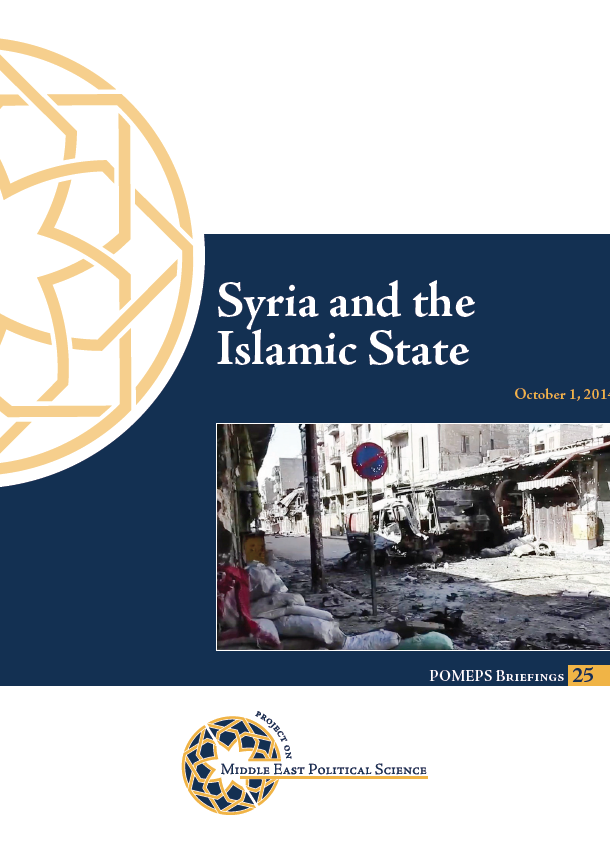 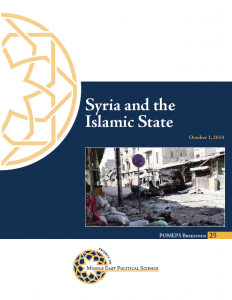 Syria and the Islamic State

Syria’s nearly four year civil war took a dramatic new turn this month as the United States and its coalition partners began bombing militants from the Islamic State group (formerly know as the Islamic State of Iraq and Syria) and al-Qaeda’s Syrian affiliate Jubhat al-Nusra. The U.S. intervention opens up profound uncertainties about the objective and targets of the military action, the responses of the dizzying array of actors on the ground, and the potential for escalation. In December 2013, POMEPS published “The Political Science of Syria’s War,” a collection of original essays by many of the top civil wars and insurgencies scholars, which helped to place the Syrian war into a broad theoretical and comparative perspective. This new collection of articles originally published on “The Monkey Cage” explores the evolution of the conflict, the nature of the Islamic State, and key debates about Syria’s horrific war.

Syria’s war itself has evolved into a complex, multipolar, and highly localized struggle. What began as a civic uprising against a repressive regime has long since morphed into an insurgency with a high degree of external involvement on all sides. The enormous complexity of local alliances and power struggles undermines the master narratives, as Kevin Mazur’s detailed examination of northeastern Syria makes clear. Those local complexities are made even more difficult by the uncertain relations between external patrons and local actors, as Ora Szekely notes. Fighters have multiple motivations, as Vera Mironova, Loubna Mrie, and Sam Whitt explore with unique survey data. Even counting the war dead poses real problems, as Laia Balcells, Lionel Beehner, and Jonah Schulhofer-Wohl demonstrate. And, as evidence of massive war crimes has mounted, Mark Kersten ponders the implications of referring Syrian President Bashar al-Assad and the conflict to the International Criminal Court.

Would earlier U.S. efforts to arm the opposition have made a difference? There has been a spirited debate over this question, with the answers of great relevance to renewed efforts to build a moderate rebel force. I argue that the literature suggests that arming the fragmented rebels would not likely have made much difference, and that Americans had little interest in doing so, at least until confronted with videos of the beheading of two U.S. citizens. Beehner offers an alternative reading of the literature, while Jonah Shulhofer-Wohl argues that it was the failure of the United States to act that fragmented the rebels in the first place.

What about ISIS? Several of these articles explore what is and what isn’t unique about the putative Islamic State. Kristin Bakke notes the long history, and the ambiguous contributions, of foreign fighters. Daveed Gartenstein-Ross and Amichai Magen explore the history of jihadist efforts to provide local governance. Laurie Brand investigates the curricula employed in Islamic State schools, and what this says about its “national” identity narrative. Is the Islamic State erasing the Sykes-Picot borders? Gregory Gause, Ariel Ahram, and William Miles offer very different answers.

As the war with the Islamic State group develops, the military dimension and its costs rise to the fore. Stathis Kalyvas roots the extreme brutality employed by the Islamic State in the logic of the war, drawing crucial comparative lessons, which help to uncover the underlying logic of the carnage. Sexual violence has an even more particular logic of its own, argue Kerry Crawford, Amelia Hoover Green, and Sarah Parkinson, which has largely been misunderstood by sensationalist media coverage.

The strategy laid out by the Obama administration to confront the Islamic State ranges across a range of tracks, from airstrikes to counter-extremism programs, humanitarian relief, and financial sanctions. That is just the sort of broad, multi-level approach that Christopher Paul and Colin Clarke find necessary for combating insurgencies of this kind. Though sustaining multilateral cooperation on such campaigns is hard, as Stephen Saideman notes.

We hope you find the timely and deeply informed essays collected in this POMEPS Briefing a useful window into the contributions of political science to the urgent challenges posed by Syria’s civil war and the Islamic State.