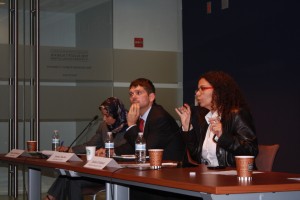 The State of the Egyptian Revolution

The unfinished Egyptian “revolution” has unleashed an array of new forces that will shape the country’s political future, but elements from the former regime could still reconstitute themselves and hinder a full democratic transition, according to a panel discussion held on September 21, at George Washington University’s Elliott School of International Affairs. The panel of Egypt experts agreed that incumbents do not easily cede power and that the country’s would-be revolutionaries face new challenges in an emerging era of increased participation.

Rabab El Mahdi, of the American University in Cairo, said Egypt remains a “politicized state” in which there is little distinction between the state as an institution and those who wield power. She pointed out that many former members and beneficiaries of Hosni Mubarak’s National Democratic Party (NDP) are establishing new parties that could resurrect the lines of patronage that sustained the former regime. “It’s just a change of names, but business is being run the same way,” she said. Those behind the revolution are, in contrast, increasingly divided between secularists and Islamists and increasingly alienated as they see diminishing returns from holding frequent demonstrations in Cairo’s iconic Tahrir Square. “I for one am starting to see Tahrir as a liability,” El Mahdi said, lamenting that as of now there are few avenues for political expression outside of street protests.

Joshua Stacher, of Kent State University, fears the intentions of Egypt’s military rulers, the Supreme Council of the Armed Forces (SCAF), which he believes has been mischaracterized as being clumsy and apolitical. He does not fear that it is reconstituting itself as an authoritarian regime but believes it has taken steps to preserve the executive power of the Mubarak era, most recently seen during the storming of the Israeli embassy in Cairo. After ignoring widespread demands to expel the Israeli envoy following a deadly border incident the previous month in which Egyptian soldiers were killed, the SCAF made little effort to quell the escalating protests outside the embassy, Stacher said. When the protesters stormed the building, sparking international alarm, the military authorities moved in to extend controversial Mubarak-era emergency laws. “This became a pretext for SCAF to clamp down,” he said. “The international community was supportive of the clampdown and were relieved… These are all very familiar patterns.”

Barnard College’s Mona El-Ghobashy struck a more optimistic tone, arguing that the defeat of Mubarak’s police state had cleared the way for a “revival of associational politics” and the blossoming of countless diverse and fragmented political movements. Egyptians are now expressing their interests through a plethora of political parties, labor and trade unions, including small boutique outfits. While the larger demonstrations in Tahrir have attracted most of the media’s attention, smaller groups of citizens across the country have taken to holding smaller impromptu gatherings in front of government offices, demanding their rights. El-Ghobashy suggested that the diverse and fragmentary nature of Egypt’s new politics militates against the formation of the kind of national movements and parties that underpin autocracies across the region.

Even Egypt’s Muslim Brotherhood, the only highly organized mass opposition movement under Mubarak, has splintered, with senior officials and youth activists alike breaking away to form their own political groups. El-Ghobashy suggested the Muslim Brotherhood’s cohesion was always overstated by the former regime, and El Mahdi argued that the divide between the Muslim Brotherhood and the newly visible Salafi Islamist movements is often deeper than the secular-religious divide. This chaotic new politics has allowed for a richer variety of interests to be expressed, but Stacher warned that it could also create an opening for a military candidate for president, perhaps even a SCAF general, who could appeal to the country’s “stability vote.”

The panelists all agreed on the importance of elections later this year, which should bring more clarity to the political scene and shed light on the SCAF’s intentions. They urged academics and policymakers to look beyond the models and categories they relied on during the Mubarak era and cautioned that the state of the Egyptian revolution is still very much in flux.