What drove American public support for the war in Iraq? In a major new study published in International Organization, Matthew Baum of Harvard University and Tim Groeling of UCLA argue that early in the war officials and elites had a great deal of power to manipulate public perceptions, but as events unfolded reality asserted itself and the ability of elites to maintain their narratives declined. Casualties alone don’t explain the trends, they suggest; news coverage of casualties matters more. By looking at content analysis of news coverage and more than 200 public opinion surveys from 2003-07, they assess how the public dealt with news coverage which increasingly fails to conform with the official narratives — something of relevance far beyond Iraq. They also find, perhaps unsurprisingly, that partisan identity matters: the president’s fellow partisans (i.e. Republicans) were “substantially quicker to positively reassess and more likely to do so in large numbers” as casualties dropped and conditions improved. In the early days, they find, rhetoric actually matters more than reality for predicting war support (at least for Republicans and Independents), while over time the pattern reverses itself with reality mattering more than rhetoric (again, for Republicans and Independents). The findings, they conclude, show the limits of the ability of elites to manipulate publics over the long term. They don’t speculate whether the same pattern will replay in Afghanistan, or whether Democrats will respond to Obama’s presidential cues in the same way as Republicans did to Bush — but it’s certainly worth exploring. 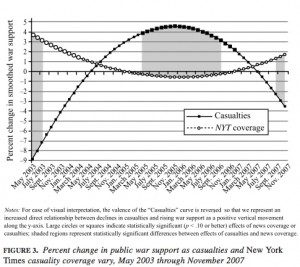 Abstract: Prevailing theories hold that U.S. public support for a war depends primarily on its degree of success, U.S. casualties, or conflict goals. Yet, research into the framing of foreign policy shows that public perceptions concerning each of these factors are often endogenous and malleable by elites. In this article, we argue that both elite rhetoric and the situation on the ground in the conflict affect public opinion, but the qualities that make such information persuasive vary over time and with circumstances. Early in a conflict, elites (especially the president) have an informational advantage that renders public perceptions of “reality” very elastic. As events unfold and as the public gathers more information, this elasticity recedes, allowing alternative frames to challenge the administration’s preferred frame. We predict that over time the marginal impact of elite rhetoric and reality will decrease, although a sustained change in events may eventually restore their influence. We test our argument through a content analysis of news coverage of the Iraq war from 2003 through 2007, an original survey of public attitudes regarding Iraq, and partially disaggregated data from more than 200 surveys of public opinion on the war.