The financial crisis in Israel in the 1970s and early 1980s presented policy experts with the opportunity to radically transform economic thinking in the country. Ronen Mandelkern and Michael Shalev explain why, with two competing plans on the table, one won out. In “Power and the Ascendance of New Economic Policy Ideas: Lessons from the 1980s Crisis in Israel”, published in the July 2010 issue of World Politics, the authors develop a theory of policy innovation premised on the successful employment of power resources by ideational entrepreneurs. They compare two attempts at policy innovation in the “fortuitous natural experiment” of economic crisis in Israel in the early 1980s: the dollarization plan of 1983, which was rejected outright, and the stabilization plan of 1985, which was accepted and implemented, leading to the radical liberalization of the following decade. The puzzle, according to Mandelkern and Shalev, is that the programs were substantively very similar. Both were radically unorthodox, calling for fiscal and monetary restraint accompanied with monetary anchoring. Why then, did the stabilization plan win out? The 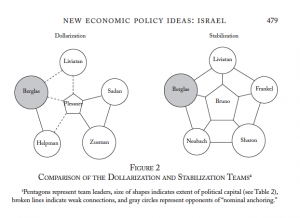 authors’ crucial finding is that the success of one plan over the other can be explained by the persuasiveness of the ideational entrepreneurs prompting them, which was itself a function of the power resources at their command.

Mandelkern and Shalev’s crucial theoretical insight builds off of discursive institutionalism, which gives primacy to the persuasiveness of ideational entrepreneurs in using discourse effectively. The emphasis on persuasion is a marked departure from theories that judge the success of policy innovation based on the intrinsic qualities of the policy itself. Instead, it gives weight to the “agency of idea carriers.” But the authors add a further critical variable to persuasion: the power resources that grant ideational entrepreneurs “a priori persuasiveness even before they take up the challenge of ‘using discourse effectively.’” In short, the authors agree with Foucault and Gramsci that “ideas are a potentially indispensible sources of power” but add that “it takes power to change ideas.”

The article is a comprehensive comparison of the dollarization and stabilization plans, contributing to our understanding of the financial predicament in 1980s Israel, the proposed solutions to the crisis, and the means by which ideational entrepreneurs successfully promoted one plan over another. Most importantly, it explains how radical policy shifts occur – a function not only of the persuasiveness of experts, but of the power resources that feed that very persuasiveness.

Download “Power and the Ascendance of New Economic Policy Ideas: Lessons from the 1980s Crisis in Israel” from World Politics if your university has access here or email info@pomeps.org for assistance.