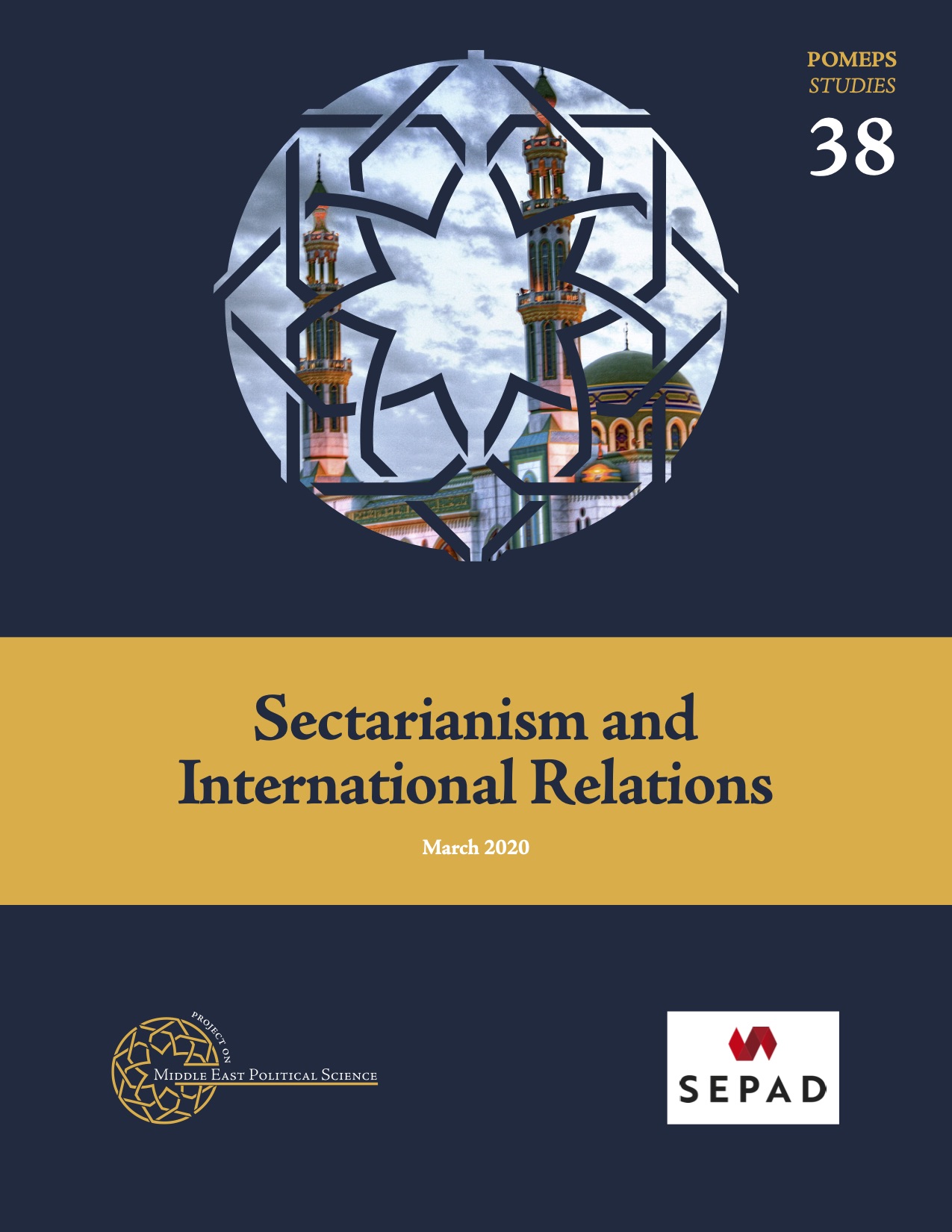 Sectarianism has surged in the politics of the Middle East over the last two decades. The Iraqi civil war unleashed horrific images of sectarian massacres, exacerbating underlying cleavages and driving the formation of armed sectarian militias. Syria’s civil war intensified and accelerated those dynamics. Meanwhile, sectarian repression defaced political systems such as Bahrain’s in the aftermath of the 2011 Arab uprisings.

Political scientists, as Morten Valbjorn explains in this collection, have divided over how to best explain this upsurge of sectarianism – and over the possibility of undoing those politicized hostilities. Some scholars have emphasized bottom-up drivers of sectarianism, as individuals and groups responded to the threats and opportunities created by state failure or identity-based state repression. Others scholars highlighted the role of sectarian entrepreneurs who used public rhetoric and political communication in novel ways to demonize opponents and fan hatreds.

This collection highlights a third line of inquiry: geopolitical competition. It focuses on how the competition between Iran and Saudi Arabia, in particular, has played out across the Middle East with devastating repercussions in Iraq, Syria, Bahrain, Lebanon and Yemen. It does not seek to minimize the importance of the other drivers. It simply seeks to explore how and where that geopolitical rivalry has inflamed or exploited sectarianism– and, equally importantly, how and where it has not.

The essays collected here were initially presented at a joint SEPAD-POMEPS workshop held at Chatham House in February 2020. The authors were asked to reflect on the ways in which geopolitical tensions between Saudi Arabia, Iran, the United States – and others – shapes conflict and societal tensions across the Middle East and beyond. Some common themes run through their responses – and some intriguing points of disagreement.

Understanding the interaction between domestic, regional and international politics has long been a key feature of International Relations – what Kenneth Waltz and others have termed the levels of analysis problem. The levels of analysis mode of analysis have always been complicated in the Middle East by the ways in which shared ethnicity, language, culture, religion and histories create a shared normative environment and distinctive set of political rules of the game. As the Arab uprisings of 2011 showed so dramatically, international structure in the Middle East is constituted by this common public sphere where events resonate across state borders as a consequence of shared norms, religion, or identities.

This overlay of balance of power with regional public sphere shapes the conditions under which Saudi Arabia and Iran played out their rivalry. The American response to the 9/11 attacks of 2001 and its invasion of Iraq in 2003 put the previous decade’s unipolarity on steroids. The reckless drive for transformative primacy backfired, though, and over the past decade the global structure has been retreating from American hegemony to something far murkier. At the regional level, the post-2011 collapse of regional powers such as Egypt and Syria left the field open for the emergence of a multipolar structure, with great powers such as Israel, Saudi Arabia and Turkey joined by newer contenders such as the UAE and Qatar. At the level of the Gulf region, security across the Gulf settled into a sort of bipolarity, underpinned by American and Israeli support for Saudi Arabia and allies. This has never been a true bipolarity: the intra-Sunni conflict between the Saudi-UAE bloc and the Qatar-Turkey bloc, for instance, proved more important than the Iran-Saudi rivalry in North Africa and other areas.

Nonetheless, the Saudi-Iranian competition played out in a range of different arenas across the Middle East – and beyond. The question for this collection is how important this competition has been for driving emergent sectarianism. If the rivalry stems from competing visions of regional order, then sectarianism might be epiphenomenal. If animosity stems from sect-based difference, alongside competing claims to leadership of the Islamic world, then it would be more central. If it is driven by domestic factors and regime security concerns, then the political landscape becomes far more complex, requiring the successful navigation of levels of analysis, with regional events shaping domestic affairs and vice versa.

While the rivalry between Saudi Arabia and Iran is not new, the Iraq war and the Arab have transformed the terms on which the two powers compete. Their competing projects took on an increasingly prominent role in regional affairs through the fragmentation of political projects across the Middle East. Shared sectarian identities may be a means through which this is achieved, such as through the Iranian-led organization of Shi’a militias to fight in Syria or Gulf media urging Sunnis to contribute to supporting a jihad defined in sectarian terms.   But, as contributors to this volume attest, we must not reduce regional politics to sect-based tensions but rather, as Greg Gause and May Darwich argue, connect them to material forces and power politics. Moreover, we must also critically reflect on the linkages between domestic and international politics, notably assumptions about regime types (and identities) and foreign policy behaviour.

The fragmentation of political projects after the Arab Uprisings created opportunity structures for regional powers to become involved in local politics in an attempt to exert influence. The unification of regional political space created a sort of security dilemma in which even powers without expansionary goals could not abstain from intervention for fear that rivals would take advantage. It is important to avoid overstating the role of external powers, however, and grant some agency to local actors who often seek to capitalise on regional tensions and position themselves on particular sides for domestic purposes.

The question of whether politics is determined by inside-out or outside-in is one that features heavily across this collection of essays amidst the conflation of domestic and regional politics in the context of a shared normative environment. Moreover, post 2011, the increased salience of sect-based identities created scope for the mapping of geopolitical aspirations onto sectarian kin across divided societies. In this context, regional powers are seen to be able to exert influence through cultivating relationships with local actors, while local actors are able to position themselves in particular ways in pursuit of material and ideational support from regional actors. Yet as Morten Valbjørn observes in this collection, much like debates within literature on sectarianism, questions of who, where, when, why, and for whom, which help to understand the ways in which sect-based identities are positioned within International Relations.

Why does sectarianism sometimes matter… and sometimes not?

Although sect-based identities have taken on prominence across the Middle East, other identities continue to resonate, also shaped by the contingencies of time and space. For example, Iraqi nationalism has been viewed by many in Saudi Arabia as a bulwark against Iranian-led Shi’a leadership. The Iranian consolidation of power following the 2003 invasion was viewed with great trepidation by Saudi Arabia for whom Nouri Al Maliki – the erstwhile Prime Minister of Iraq was viewed as an “Iranian agent.” The transition away from the “pro-Shi’a” politics of Al Maliki to a more inclusive vision put forward by Haider Al Abadi thus provided an opportunity for Saudi to erode Iranian gains.

Indeed, as Jacob Eriksson explores, Saudi Arabia sought to mobilize a nationalist agenda – in contrast to Iranian efforts to exploit sectarian divisions – supported by the deployment of material resources. Beyond this, Iraq has sought to position itself as a mediator in tensions between its Gulf neighbours, yet the escalation of protests in late 2019 posed serious questions about Baghdad’s influence on regional politics along with both Saudi and Iranian influence in Iraq. Maria-Louise Clausen takes this analysis of Iraqi nationalism a step further, reflecting on the October protester’s rejection of external interference and efforts to exert agency in the face of broad systemic pressures on domestic politics in Iraq.

In Bassel Salloukh’s contribution to this volume, the case of Hizballah is used as a means to reflect on the salience of ideational factors amidst material pressures. Salloukh traces the evolution of the Party of God’s position on the sectarian organisation of Lebanese politics from a staunch rejectionist position in its formative years to “perhaps its most significant prop.” Hizballah’s involvement in the Syrian war left it exposed to the virulent sect-based animosity that it had for so long rejected, while its actions also put a huge strain on its material capabilities. When the October 17 protests broke out across Lebanon, driven by broader Lebanese economic challenges, the Party of God’s own material resources had dramatically waned, leaving it to rely on its ideological capital.

The permeability of Lebanese politics – best seen in the creation of the March 8 and March 14 blocs – left many suspecting that the October protests would lose its anchoring in domestic affairs. Yet, as Helle Malmvig and Tamirace Fakhoury argue, this has not occurred as a consequence of efforts to stress inclusivity, a direct avoidance of sectarian polarisation, and ‘rising above’ geopolitical binaries. In spite of initial successes, Malmvig and Fakhoury suggest that geopoliticization – a discursive process of moving issues from the domestic level to the international – provide the means for elites with a vested interest in the survival of the power-sharing system to try and discredit the protests movements.

In the context of these changing environments, the rivalry between Saudi Arabia and Iran has also changed. As Chris Phillips argues, changes to regional structures allowed Iran to gain the upper hand, capitalising on opportunities, using material and ideational capabilities in a way that out manoeuvred its regional rivals.

Similar variation can be seen beyond the borders of the Middle East. As May Darwich and Edward Wastnidge explore in this volume, Riyadh and Tehran – amongst other regional powers – have become increasingly involved in the Horn of Africa and Central Asia, amongst others, drawing on material and ideational reserves in pursuit of their interests.

As Wastnidge notes, Central Asia provided new opportunities for Saudi Arabia and Iran to exert influence across the wider Muslim world: for Iran, this helped reduce isolation and for Saudi Arabia, it provided opportunities to export its ideological vision. But, as Darwich notes, similar opportunities in the Horn of Africa driven by material power largely did not manifest in sectarianism.

Gause and Phillips emphasize that while sect-based allegiance is undeniably important, it is one tool amongst many in a leader’s ideational arsenal which must be taken alongside material capabilities. Reflecting on this, it is important, as Valbjorn argues, to remember that sectarianism is but one strand amongst many, including national, ethnic, and linguistic identities, and ideologies.

Decisions over when to deploy ideational or material tools are contingent on context. When ideational capital is eroded, it is hardly surprising for actors to turn to material capital and, conversely, when material capital is eroded, actors may deploy ideational capital. Understanding the conditions in which these decisions are taken requires reflecting on both domestic and regional contexts and navigating a set of complex IR questions. Power politics can never fully be divorced from questions of identity – especially when the exercise of political power involves the exploiting of identity cleavages available for mobilization. Sometimes that will mean sectarianism, sometimes it will not.

The strategic use of sectarianism increases in significance to the extent that the passions inflamed persist beyond the immediate conflict. If sectarian mobilization easily diffuses once the fighting ends, then it may be more easily dismissed as epiphenomenal. Decades of the study of ethnic conflict and identity wars suggests that this is not likely the case, however. Sectarian and identity divides which are magnified by the horrors of war do not easily fade from memory. They tend to become entrenched in individual psychologies, communal norms, political institutions, media frames, legacy armed groups, and historical memory. The sectarianism inflamed by the last two decades may prove alarmingly resistant to efforts to rebuild regional order even if the balance of power shifts and states move towards de-escalation. The essays in this collection offer only a first look, then, at where these processes come from and where they might lead.