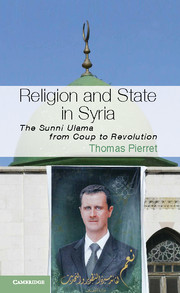 In fall 2013, Marc Lynch published “A Syria Reading list” to aid those seeking to understand the conflict in Syria at a deeper level. The reading list features some of the most useful books for making sense of Syria’s war, including Thomas Pierret’s Religion and State in Syria: The Sunni Ulama from Coup to Revolution (Cambridge University Press).

Religion and State in Syria “is the first comprehensive study of the country’s little-known religious scene and its most influential actors, the ulama.” Based on Pierret’s fieldwork in Syria’s mosques and schools and on interview with local Muslim scholars, this book “affords an entirely new perspective on Syrian society as it stands at the crossroads of political and social fragmentation.”