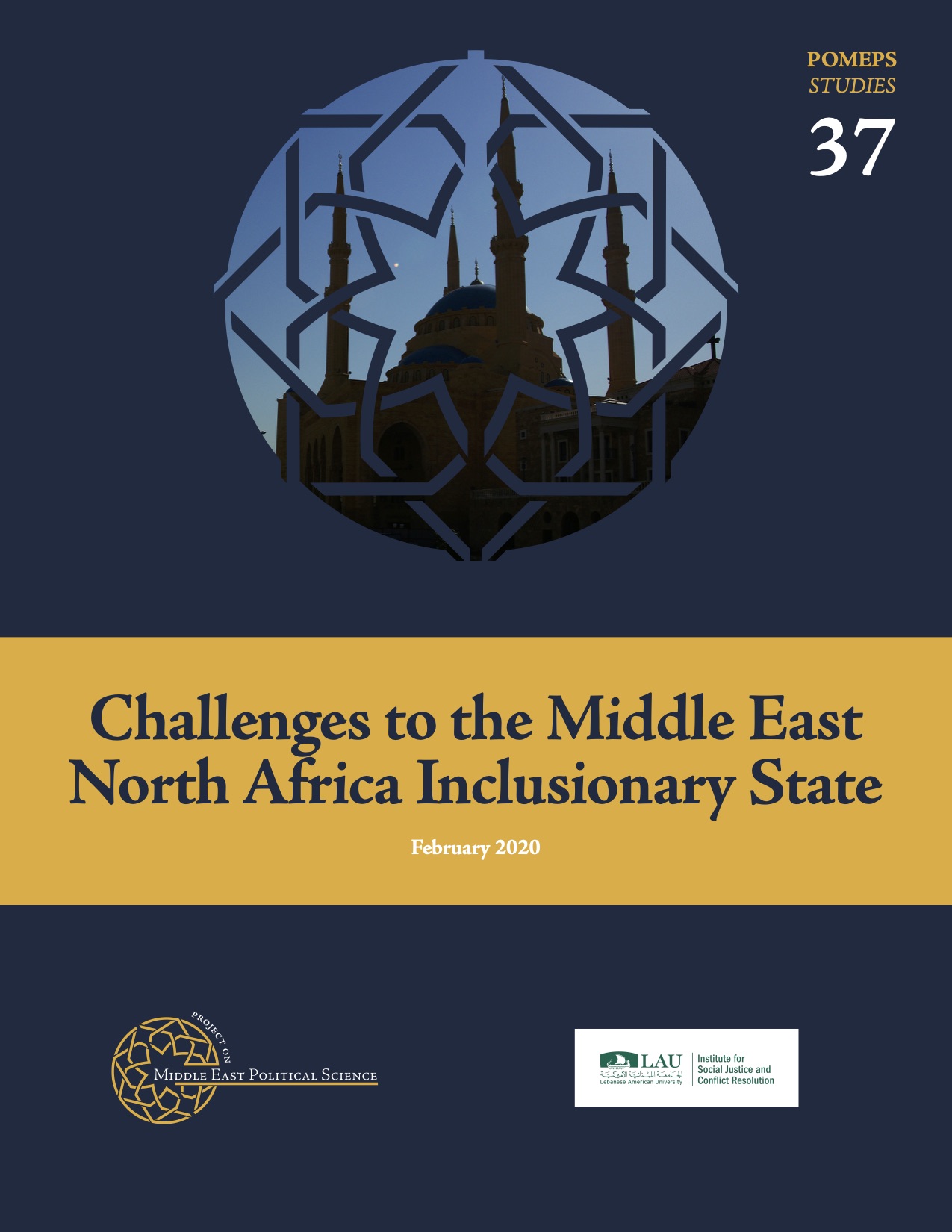 The organizing question toward which these essays are directed asks about the impact of non-state actors on post-uprising states in the Middle East and North Africa. Many responses interpret this with regard to armed non-state actors, largely positioned as exogenous to the state. Asking broadly about about the relationship of non-state and state actors alike to people – their lives and livelihoods, their security, and their sense of identity – can highlight the ways in which non-state actors are already closely imbricated with the role and robustness of the state and its ability to respond to the needs and desires of society. In the post-2011 context, citizens have remained mobilized and politically engaged throughout the region, even (or especially) alongside conflicts that bring with them significant violence and insecurity. In these contexts, non-state actors have taken a range of forms, but have not been exogenous to the (past) performance of the state; as they compete with state and other non-state actors to respond to the needs of communities, they similarly are not outside of its future.

Consider the relationship between state and non-state in Yemen. The literature on Yemen as a “failed state” and the assumed relationship between state-failure and insecurity was established well before the civil war, but how this was understood and experienced by different segments of Yemeni society varied, as did the perceived implications of the designation itself. I was in Sana’a, Yemen in 2005 when Foreign Policy ranked Yemen as “failed” in its first Failed States Index. Conversations with people active in a range of non-state initiatives and organizations focused on the perceived advantages and disadvantages of the listing, including how it might help those who sought to secure concessions from the state or encourage particular kinds of reforms in state institutions. The nature and function of non-state actors was not constructed by these actors as conceptually autonomous from the state but rather as intimately tied to its past and future performance of key functions. Despite methodological and theoretical differences, much of the academic literature on Yemen has followed our Yemeni interlocutors in recognizing that what happens in the “non-state” realm is shaped by state performance and priorities.[i]

This is not to suggest that non-state actors emerge automatically in response to some common set of conditions or work to respond to community needs in precisely the same ways. Different types of non-state actors have different implications for the state, just as they each develop in relation to different conditions of state performance. At a minimum, we might differentiate between:

There are non-state actors fitting each of these categories operative in the context of Yemen’s highly internationalized civil war. The reasons for the formation of these groups differ, but definitionally, each of them has a distinct relationship to the state, as a set of institutions and as a discursive object, as well as diverse relationships to and understandings of Yemeni society. It is worth fleshing out these distinctions before considering how each might affect the future of the state.

Yemen’s Southern secessionist movement is currently the only non-state armed faction in Yemen working toward the goal of establishing state sovereignty in both its empirical and juridical forms.[ii] While the whole of the Hirak, or Southern Movement, has not always been (and indeed is not today) secessionist, war dynamics have increased secessionist demands and the material and political support of the UAE has made an independent South an actual possibility. The Houthis’ overextension into Aden in 2015 papered over substantial differences between supporters of secession and supporters of the Hadi government (who themselves range in their aspirations from supporting a unitary Yemen to supporting a federal state with a high degree of decentralization). After the Houthis’ northern retreat, these differences became more pronounced. When the UAE recognized the newly-declared Southern Transitional Council in May 2017, it sedimented the cleavage between the Saudis and the Emiratis that erupted in open violence in August 2019. The Riyadh Agreement signed in October 2019 temporarily tabled this issue, but also featured the first internationally-brokered recognition of the STC leadership.[iii] Secession is the deepest non-state threat to state power in Yemen insofar as it constitutes a rival sovereign project. As the STC’s eventual withdrawal from the agreement in January shows, it is also the arena of conflict least likely to be resolved, if at all, by Yemeni actors themselves.

The primary example of this category of non-state actor would be the Houthi movement, or Ansar Allah. While Houthi militias and their allies seized power by force in 2015 (and arguably laid ground for this through earlier moves in late 2014), there is little to suggest that they actually believe that they can successfully govern the whole of Yemen or that they aspire to do so. Instead, efforts to entrench their position through governance within relatively stable battle lines in the North and the unilateral pledge to suspend drone strikes on Saudi Arabia in September 2019 suggests that the Houthis are aware that there will be no military solution to the war in Yemen and that some kind of powersharing agreement will be necessary to secure peace.[iv]

Exclusion from transitional powersharing from 2012-2014 was a core Houthi grievance before the war, but it may be regarded as a shibboleth today. The brutality of Houthi rule in Sana’a and in some parts of Taiz, especially, suggests that there may be significant resistance to a powersharing agreement with the Houthis. While the movement coordinated with ideologically different allies before the war, including both the Hirak and Islah, the hardening of social boundaries during the war makes this less likely now. Even if elites are able to strike a deal, it is unclear whether broad segments of the population would agree to its terms.[v] At the same time, Houthi leaders have tasted more political power over the past five years than they had before the war, and may struggle to relinquish it. Any powersharing agreement that categorically excludes the Houthis or blocks their de facto governance in the areas of the far North that form their social base would replicate weaknesses of the “transitional” framework that fueled the movement’s power grab in 2014-15 and initiated the war itself.

If some armed non-state actors use force to establish empirical sovereignty and seek recognition, others also use violence to disrupt the ability of Yemen’s political factions to develop a lasting settlement on which state institutions can be rebuilt. For a portion of the war, Al Qaeda in the Arabian Peninsula did govern much of the province of Hadramawt directly (from spring 2015 to April 2016), but this approach was short-lived and coincided with the perceived threat to the organization by the expansion of the Islamic State elsewhere in the region.[vi] Since the latter’s relative decline, AQAP has resumed its more established role as a disruptive force in Yemen. Reportedly integrated into some Southern militias (including those aligned with the STC and with the Hadi government), the primary contribution of AQAP to Yemen’s war has been to increase the conflict’s sectarian character through symbolically targeted violence and anti-Shi’i rhetoric.[vii] This has helped to ensure that political grievances between the Houthis, the Hadi government, Islah, and the STC are more difficult to broker or sustain. Moreover, the blurred boundary between AQAP and salafi miltiants in the South will make the future policing of such militancy a politically fraught challenge to Yemeni state (re)builders.[viii]

Some of Yemen’s wide array of civil society organizations and private sector actors fall into this category. In some cases, they are carrying out functions that have in the past been the work of the state, providing for the privatization of peace by restoring basic services and rebuilding infrastructure. In other instances, they are providing entirely new services. In either case, they operate according to a local self-help ethos in relation to specific communities and/or in pursuit of profit. These are not mutually exclusive. Though such actors do not explicitly call for political inclusion in state institutions, their provision of basic state functions will have implications for any version of a post-conflict Yemen, particularly where private sector actors have carved out profits through the provision of essential services.[ix] Moreover, some private sector actors have close ties to foreign and domestic investors with clear political agendas, turning private sector-led reconstruction into an opportunity for partisan, sectarian, and/or foreign influence-brokering.

Many of Yemen’s wide array of civil society organizations, and organized and semi-organized “initiatives” fit into this category, offering services and contributing to reconstruction where possible but with the explicit aim of a more inclusive political future. This category includes many of the activists and organizations that participated in the 2011 uprising, some of whom also were active in Yemen’s transitional institutions from 2012-2014. Organized groups representing women, youth, specific localities, particular sectors of the economy, etc., have sought voice in formal diplomatic channels, hoping to contribute to a more inclusive peace process that factors in the needs and political claims of non-combatants. While UN processes have shown limited openness toward such groups, many have been able to amplify their positions through partnerships with international civil society and donor organizations; their medium-term goals extend beyond service provision, however, to political inclusion and the remaking of the Yemeni state.

Building Governance from Below/Outside the State

The diverse range of practices and goals expressed by non-state actors in Yemen raise serious questions for Yemeni state-(re)builders. Some of these practices and goals may be fundamentally incompatible with the restoration of a single territorial Yemen. Others may aim at reconfigurations of power that appear today unattainable (but may not remain so). But many practices by non-state actors are already building governance outside of the context of state planning or authority. Whether a nascent post-conflict state might be able to capture the benefits of this kind of bottom-up governance and transform it into meaningful state-building will depend on the extent to which powerbrokers who negotiate the parameters of peace in Yemen first recognize and then enable the promise of these groups, and whether they are willing to more widely share power themselves.

[i] This focus ranges from the critical theoretical emphasis on performativity and partiality in Wedeen’s Peripheral Visions (University of Chicago Press, 2008), to more sensationalist policy analyses of state “underperformance” and insecurity in Ottoway and Boucek’s Yemen on the Brink (Carnegie Endowment for International Peace, 2010) or more instrumental analyses of elite manipulation of the discourse of state failure, as in Sarah Phillips’ Yemen and the Politics of Permanent Chaos (Routledge, 2011).

[ii] For a good recent overview of the Southern Movement’s understanding of sovereignty and its relationship to the history of Southern sovereignty, see: Ariel Ahram, Break All the Borders (Oxford University Press, 2019), 95-120.

[v]Public opinion polling on living conditions and drivers of insecurity paint a portrait of considerable fragmentation, but in contested areas like Taiz, the Houthis are identified as a core driver of deteriorating conditions and personal and gender-based insecurity for a plurality of respondents. Yemen Polling Center, “Perceptions of the Yemeni Public on Living Conditions and Security-Related Issues,” May 2017. http://www.yemenpolling.org/advocacy/upfiles/YPCPublications_YPC-Data—Perceptions-of-the-Yemeni-public-on-living-conditions-and-security-related-issues—May-2017.pdf

[ix] CARPO is currently funding a five-team research project exploring the role of many different kinds of unarmed non-state actors. For an overview of the project, which addresses the role of the private sector, media, youth organizations, women’s organizations, and civil society broadly, see: Mareike Transfeld and Marie-Christine Heinze, “Understanding Peace Requirements in Yemen,” Center for Applied Research in Partnership with the Orient, 5 March 2019, 20. https://carpo-bonn.org/wp-content/uploads/2019/05/carpo_policy_report_06_2019.pdf