Religiosity, Islamic values, and social trust may poorly predict individual support for democracy in the Muslim world. Instead, fifty years on, modernization theory may still be the best explanation for democracy, or the lack thereof, in Muslim majority countries. So argues Sabri Ciftci in “Modernization, Islam, or Social Capital: What Explains Attitudes Toward Democracy in the Muslim World” published in the May 2010 issue of Comparative Political Studies. Ciftci employs factor analysis to test the individual effects of cultural and economic modernization alongside measures for Islamic values and social trust, controlling for age, gender, and perceptions of satisfaction with financial situation. He also 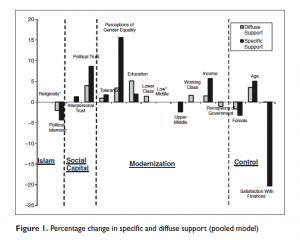 disaggregates “support for democracy” into diffuse and specific support, allowing for a more nuanced use of available survey data (he uses data from the fourth wave of the WVS). After running a series of OLS regressions, including cross-sectional and separate country estimations for ten Muslim-majority countries, all ranked partly free in the Freedom House index, Ciftci finds strong support for explanations based on cultural modernization and moderate support for economic modernization. A few findings are surprising: First, class-based explanations, which run deep in modernization literature and have proven statistically robust elsewhere, appear to have little explanatory power for individual support for democracy in the Middle East. The effects of rentierism may explain this aberration. Second, and in line with previous findings, perceptions of gender equality have the strongest effect on specific support for democracy. The author places this finding within the broader expectations of modernization, where urbanization and industrialization may lead to greater social mobility, education, and employment for Muslim women, leading to an attitudinal shift and greater support for democracy. A third result suggests that there is little evidence that “Islamic values” have a significant effect on individual support for democracy. Religiosity has no statistical significance in 8 of the 10 countries, posing a challenge to the theory that Islam and democracy are incompatible. Finally, Ciftci’s findings have important policy implications. High levels of support for democracy in majority-Muslim countries suggests that a transition to democracy in these countries would be met with a fair deal of popular support. More importantly, Ciftci argues that “a bottom-up approach supporting economic development, education, and female empowerment rather than a top-down approach imposing institutions may be more instrumental in fostering and maintaining democratic attitudes in the Muslim world.” Ciftci’s article presents a valuable contribution to modernization literature, while challenging some of the conclusions of theories premised on social trust or Islamic values.

Download “Modernization, Islam, or Social Capital: What Explains Attitudes Toward Democracy in the Muslim World” from Comparative Political Studies if your university has access here, or email info@pomeps.org for assistance.