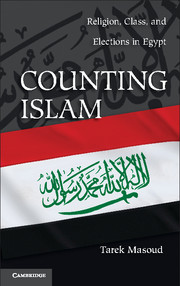 POMEPS is excited to have just received a shipment of Tarek Masoud’s recent release Counting Islam: Religion, Class, and Elections in Egypt (Cambridge University Press, 2014) for our book launch with Masoud, Friday, September 5, 2014. You can RSVP here. POMEPS will provide free copies of the book to students in attendance. In Counting Islam Masoud seeks to explain the dominance of Islam in Egyptian politics. “Tracing the performance of Islamists and their rivals in Egyptian elections over the course of almost forty years, this book not only explains why Islamists win elections, but illuminates the possibilities for the emergence in Egypt of the kind of political pluralism that is at the heart of what we expect from democracy.”

Masoud has been a frequent contributor to POMEPS. Most recently he participated as a discussant in the POMEPS 5th Annual Conference. In January 2014 he participated in the “Rethinking Islamist Politics” panel (video here) and first annual Islam in a Changing Middle East conference. Read Masoud’s conference memo, “Rethinking Political Islam? Think Again” in POMEPS Studies 7. — C.K.