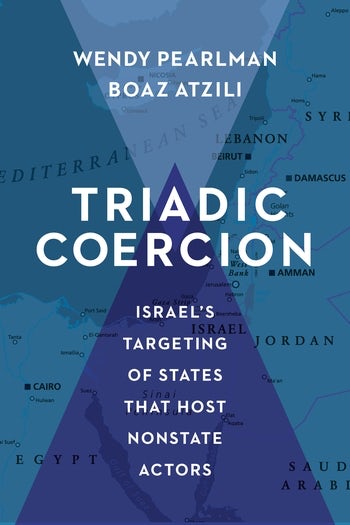 “The inspiration for the book goes back to the 2006 war between Israel and Lebanon— or Israel and Hezbollah,” said Peralman. “Boaz and I both had postdoc fellowships at Harvard and we met in the aftermath of that… We’re both quite intrigued by one aspect of that war, which was Israel’s targeting of Lebanon as a state. Why would Israel target a weak host state— and demand it to stop non-state actors?”

“We find is that in earlier years [of this policy], it’s basically a trial and error kind of process. Israel has tried many different things— defensive measures, targeting civilians, etc.— and among them was what we call ‘trial coercion.’ So trying to target the forces of the state the military or police of the state and using that as a way to coerce the state to try to rein in the non-state actors. And when we get to the 1990s, that’s where we see a shift where Israel basically adopt this policy more wholesale— and without considering whether it’s working or not working,” said Atzili.

“Our argument there is that triadic coercion can only succeed against a host state that is strong. The host state needs a minimum amount of political cohesion and institutional capacity to even meet the demands of the coercer. When this type of strategy is used against a weak host state— even if it is predisposed to be cooperative with Israel, even if it shares Israel’s opposition to the non-state actor—it simply doesn’t have the internal cohesion or institutional capacity to actually act against a non-state actor,” said Pearlman.

Wendy Pearlman is an associate professor of political science at Northwestern University, where she also holds the Martin and Patricia Koldyke Outstanding Teaching Professorship and is a faculty fellow at the Buffett Institute for Global Studies. Boaz Atzili is an associate professor and the Director of Doctoral Studies at the School of International Service (SIS) in American University, Washington DC.