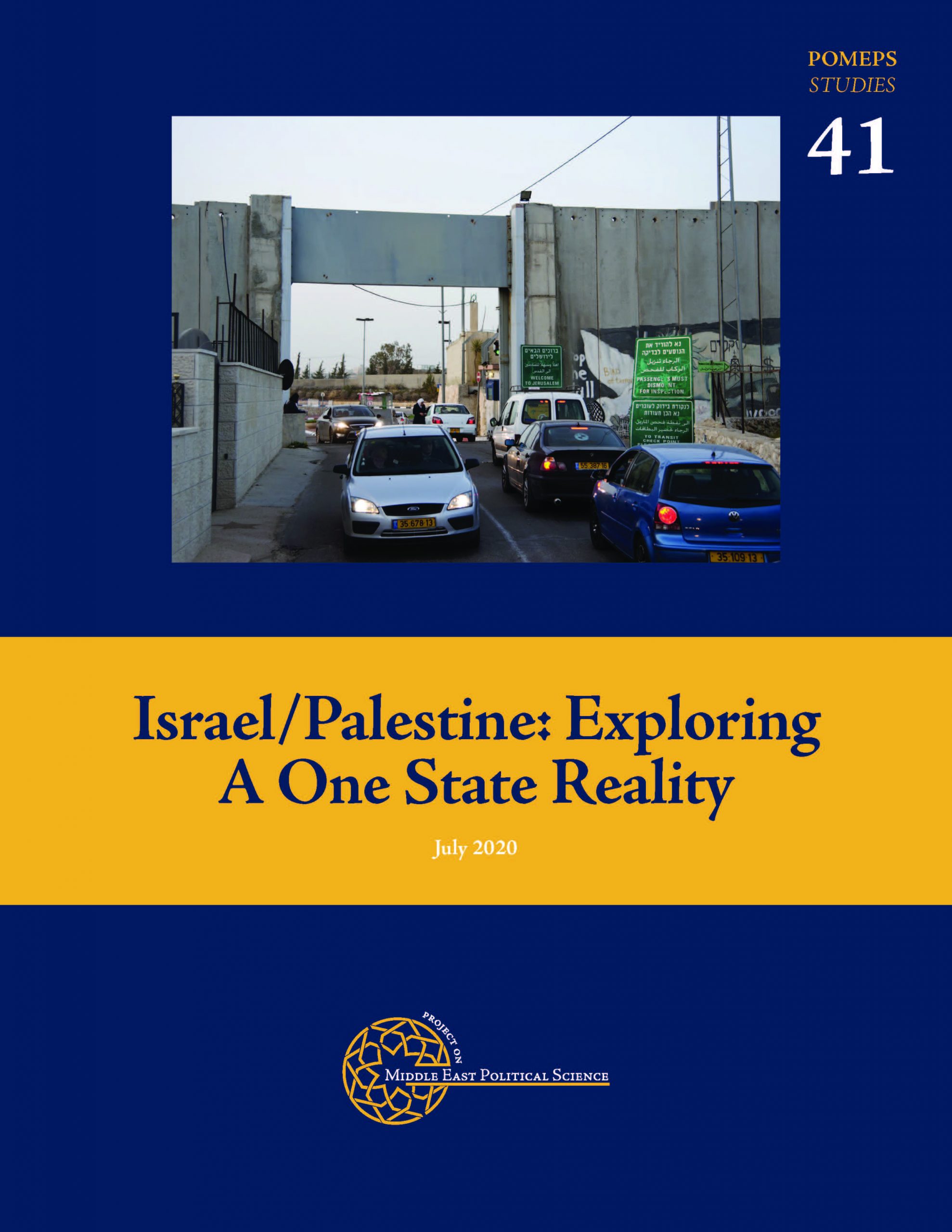 On July 1, Israel’s Prime Minister Benjamin Netanyahu delayed an announcement on his declared plan to annex parts of the West Bank. The delay offered only a temporary stay of execution of the plan for annexation; for Netanyahu maintained that he would proceed at some point in the near future despite strong international opposition and warnings from across the spectrum of the costs of such a move.

For many observers, such an annexation would mean the end of the possibility of a two-state solution. But for many Palestinians and Israelis, that prospect ended a long time ago. In its place, a one state reality had emerged far removed from the diplomatic niceties of the ‘peace process’ or mainstream policy debates. Decades of relentless change had relegated the two state concept enshrined in the 1993 Oslo Accords to a part of history, sitting alongside the 1937 Peel Commission report which had proposed a two state solution to an increasingly unworkable British mandate.  While the Peel Commission was dead on arrival, the more recent efforts toward a two state solution had seemed tantalizing close.  How close will forever be a matter of dispute, but it has been many years since any serious prospect of its achievement really existed.  Palestinians, Israelis and the international community were prepared to live with the pretense of a possible two-state solution for normative and strategic reasons, even while Israel’s occupation steadily transformed the legal, physical, and human geography of the West Bank and deeply entrenched restrictions on movement in or out of Gaza. In many ways the proposed annexation only helps end the pretense of what already exists.

But what is it which actually exists today west of the Jordan River?  How can we usefully describe the political and military arrangements which govern this territory and people? More and more scholars, analysts and activists from Palestinian, Israeli and international perspectives have begun grappling with the emergent reality. Those questions have moved from the margins to the center of policy discussion. Mainstream think tanks such as the International Crisis Group, the Carnegie Endowment for International Peace, the Brookings Institution and the Center for a New American Security have launched projects intended to rethink the paradigms of the peace process.  In October 2019, the Project on Middle East Political Science convened a workshop with more than a dozen scholars – Israelis, Palestinians, and others – to discuss the contours of this emergent one state reality. Over the following months, more scholars were brought in to the discussion. A workshop scheduled for April at the University of Maryland designed to bring Washington policy practitioners into dialogue with these scholarly perspectives had to be postponed due to the COVID-19 pandemic, but more work in that direction continues.

There are many important questions to be asked about the emerging Israeli-Palestinian reality, questions about political strategy and normative aspirations and alternative future scenarios.  For this collection, we chose to ask what this new political configuration is and how its existence is likely to force others to adjust to the new reality.

Our starting premise was that Israel today is already a de facto single state with a complex, undertheorized and variegated form of layered sovereignty. Not all the participants agreed with that assessment, in ways which generated highly intellectually productive debates and discussion. Whatever the stance of individual participants on the question, all agreed that the focus of the project would be to look at what Israel actually is, and not what it might someday become.

We posed a series of framing questions, which participants inevitably pushed beyond and made their own.  What are the concepts available to us to make sense of such an unusual non-state state environment, and what do they tell us about the dynamics of the state and society in this de facto one-state setting?  What is the best way to characterize Israel/Palestine in comparison to other states, nations and political entities?  What label makes the most sense, based on which criteria, and what are the political, analytical and normative implications of each possible choice? Are there useful comparative cases, or is Israel sui generis, outside of our current conceptual or comparative universe? What happens if we judge the Israeli state not according to legal sovereignty but rather on the basis of effective control?  Does our answer to “what is Israel” change once we recognize that the de facto Israeli state includes the inhabitants of the “occupied” territories, East Jerusalem, or Gaza?  How should we think about the variegated nature of rights assigned to different individuals depending on their religious and ethnic status?  Where does Gaza fit in this equation?

While we instructed authors to avoid offering policy recommendations or political commentary, we are of course interested in the practical implications of the answers developed to these conceptual issues. What is the consequence for relations between Israel and the world should the two state concept fade away?  Perhaps there will be no real consequences at all beyond outraged editorials and empty statements from diplomats who know well that their words have no value; in other words, rather like the reaction to other steps along the way toward a one state reality. Perhaps it will galvanize the consolidation of BDS as an international normative social movement or drive the fraying of U.S.-Israeli relations under a post-Trump administration. Perhaps Israel would become a pariah country like pre-1994 South Africa, increasingly isolated, expelled from international institutions and organizations. Or, perhaps the international community – including the Gulf Arab states currently flirting with open relations with Israel – simply adapts to the fait accompli and deals with Israel as it always has.

Such diplomatic and international consequences barely scratch the surface, however. The deeper questions revolve around the emergent political entity itself.  What kind of Israeli and Palestinian politics would evolve within a recognized one-state reality?  How sustainable are dual institutions and differentiated citizenships?  How permanent and irreversible are the sorts of physical barriers and settlement developments which have created these facts on the ground?   Do fears of Apartheid or the fears for democracy of an effective Jewish minority still matter in a world increasingly shaped by global populism and anti-democratic forces?  Which social forces would be empowered and disempowered by alternative political arrangements?  Would reconciliation or co-existence at the individual or communal level be possible under new political institutions?  What would such a reality mean for engagement by the Jewish diaspora and the Palestinian diaspora? What would be the role of religion and religious actors in such an Israel? What are the normative or legal obligations for justice after decades of occupation?  What would become of the institutions and legacies of the Palestinian Authority?   If the West Bank becomes increasingly integrated through annexation, what happens to Gaza?

The essays in this collection represent an initial assessment of this reality, and many more will follow over the years to come.  The authors each bring their own perspective and history, their own commitments and values, their own aspirations for the future, producing areas of agreement and disagreement.  But all agree on the urgent need to recognize the Israeli-Palestinian reality for what it really is and to develop the theoretical language and conceptual tools to rigorously describe and compare that reality.  We hope this collection makes a small contribution to the vibrant intellectual debates developing around these issues and joins those ongoing dialogues in a productive way.