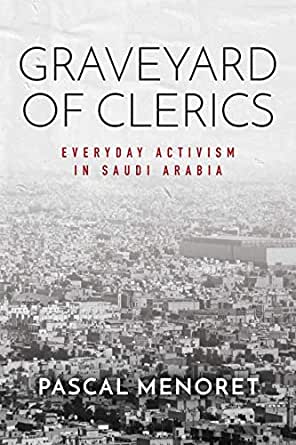 Pascal Menoret talks about his latest book, Graveyard of Clerics: Everyday Activism in Saudi Arabia, with Marc Lynch on this week’s podcast. In the book, he tells the stories of the people actively countering the Saudi state and highlights how people can organize and protest even amid increasingly intense police repression. 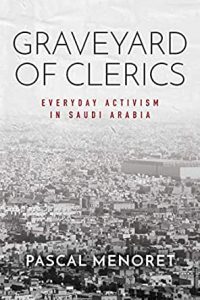 Menoret explains, “Basically what happens in the suburbs is that it’s a fixed place where people could congregate and create mass movements by the presence or the co presence of their bodies. On the street what you have is moving entities-moving devices-moving tools, automobiles that can be used to reconstitute movements to protest sometimes and to create that effect of mass that might change the political dynamic in the country.”

“I was interested in looking at…what activists call Islamic action…in everyday spaces. And these big figures indeed become parts of much more grounded conversations about the meaning of, for instance, what it means to read books…what it means to read novels for young activists who gather in a high school and some of whom are interested in reading Harry Potter. That’s a great challenge because they decide that you know first of all reading is a training and it’s trains you to use the language to think, to speak, but it’s also a way for you to get exposed to other ways to look at the world and therefore you can only make your own you know self-construction as a reader but also as an activist stronger; you become more articulate,” he explains.

Menoret goes on to say, “Muslim Brothers will tend to use many more spaces to organize and to create conversations and to create numbers and to create an atmosphere in which you can actually talk about social issues. You can talk about intellectual issues, you can talk about political issues, they will use sports to do that, they would use leisure spaces…they will use the suburbs actually. They will really have a whole thinking about what it means to be living in the suburbs and to organize in suburban environments whereas the Salafis…tend to be much closer to the religious sciences right into a space that is much more exclusive in many ways…”

Pascal Menoret is the Renee and Lester Crown Professor of Modern Middle East Studies at Brandeis University. He is the author of The Saudi Enigma: A History (2005) and Joyriding in Riyadh: Oil, Urbanism, and Road Revolt (2014), Joyriding in Riyadh: Oil, Urbanism, and Road Revolt (Cambridge University Press 2014), Arabia, from the Incense Road to the Oil Era (Gallimard 2010, in French), and The Saudi Enigma: A History (Zed Books 2005). An ethnographer and historian, he conducted four years of fieldwork in Saudi Arabia and has also lived in France, Yemen, Egypt, and the United Arab Emirates. He earned his Ph.D. from the University of Paris and was a postdoctoral fellow at Princeton University and Harvard University.