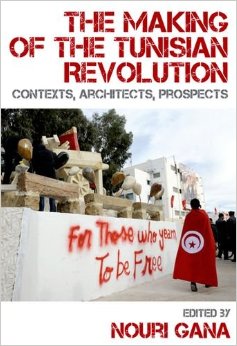 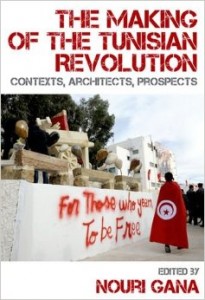 The Making of the Tunisian Revolution: Contexts, Architects, Prospects (Edinburgh University Press), edited by Nouri Gana, is a multidisciplinary collection of essays that “reflect on the local, regional and transnational dynamics together with the long and short term factors that, when combined, set in motion the Tunisian revolution and the Arab uprisings.” The Making of the Tunisian Revolution traces “the intertwined genealogies of cultural dissent that have contributed to the mobilization of protesters and to the sustenance of protests between 17 December 2010 and 14 January 2011, and beyond.”

In chapter 10, POMEPS TRE grantee Monica Marks examines “Women’s Rights before and after the revolution.” Marks, a Tunisia-based Rhodes Scholar, participated in the POMEPS event “Between Salafists, Secularists, and Security Forces: The Politics of Tunisian Youth in the Age of Ennahda” on March 17, 2014.  She has also been a frequent contributor to Foreign Policy’s Middle East Channel. Her articles include: “Who are Tunisia’s Salafis?” (September 12, 2012), “Tunisia’s student Salafis” (January 6, 2013) “Tunisia in turmoil” (July 26, 2013), and “Tunisia’s transition continues” (December 16, 2013). — C.K.