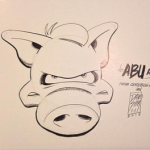 POMEPS is committed to helping early career scholars from the Middle East and North Africa region. At a recent workshop organized in Amman, Jordan, by the American Political Science Association’s MENA Workshops, POMEPS Director Marc Lynch gave a talk to the 40 junior scholars about the “hidden curriculum” for publishing in American academic journals. He has written up those remarks as a short essay on his blog, Abu Aardvark’s MENA Academy, entitled “Hidden Curriculum: Publishing in Academic Journals.” The piece is the first in a series of pieces discussing a “hidden curriculum” which often disadvantages scholars from the Global South in navigating the field of political science. In the piece, Lynch touches upon important topics such as the number of articles a dissertation should produce, identifying target journals, communicating with editors, handling rejection, and what to include in a response letter.  This is the first in a series of pieces on the “hidden curriculum” which Lynch plans to write in order to even the playing field for early career scholars from the MENA region. To read the full piece, click here.