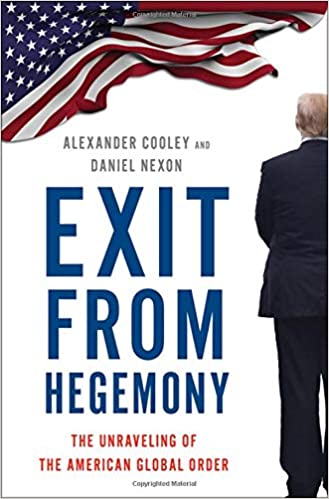 Is American global hegemony already over? On this week’s podcast, Daniel Nexon talks about his latest book, co-authored with Alexander Cooley, Exit from Hegemony: The Unraveling of the American Global Order, with Marc Lynch. The book explores pathways in which hegemonic orders come apart—short of great power war—and the kinds of processes that are playing out in shaping global politics today. 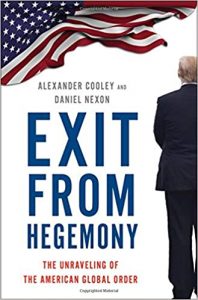 “The big biggest change since the 1990s has been the development of the fact that many more powers not just China and Russia but also Saudi Arabia had the capacity to and have been engaged in efforts to ride some of the kinds of goods we associate with international order; with hedge funds, private and club goods development assistance, that sort of thing. And that these are increasingly in sort of conflict with one another; they’re increasingly representing contestation over the shape of order rather than say collusion to maintain a similar kind of broad order, ” Nexon argues.

He explains that the United States “had to engage in huge payouts and huge concessions to allies like Saudi Arabia to try to reassure them and those types of bargaining, those kinds of bargaining processes are actually fairly fundamental the way that that ordering works, that hegemony works.”

“It’s important when we talk about the sort of unraveling of the US’s ability to engage in sort of unbridled hegemonic ordering that it’s not just a story about the rise of a potential peer competitor in China or the activities of a traditional great power like Russia, it’s also a story about the diffusion of power outward from states that are not global great powers but are also capable of playing this game,” said Nexon.