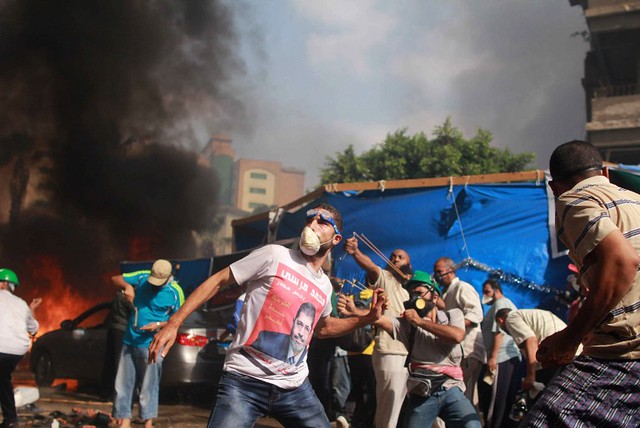 On January 29, 2016, POMEPS hosted its third annual workshop at George Washignton University on Islamist politics (video of the public panel here). The workshop brought together more than a dozen scholars from diverse disciplinary and methodological perspectives to discuss new research approaches and conceptual issues in the study of Islamism.

Participants were asked to write short essays addressing how the dramatic changes in the Islamist landscape in recent years, from the rise and fall of the Muslim Brotherhood to the emergence of the Islamic State, change our research methods, priorities, and arguments. What assumptions underlying our research need to be problematized? What previously robust research findings no longer seem to hold? How should we deal with the vast outpouring of information and evidence about these movements now available on social media? What do we even mean by the term “Islamist”?

The workshop papers will be published here once a day over the next few weeks, and then released as volume 16 in our POMEPS Studies series:

“Why ‘Islamism’ Does Not Help Us Understand the Middle East,” by Jillian Schwedler, Hunter College

“Old Questions and New Methods in the Study of Islamism” by Steven Brooke, Harvard University

“The Failures of Radical Islam” by Ahmed Khanani, Earlham College

“The Islamist Identity Crisis: How Mainstream Islamism Lost Control of Its Own Narrative” by Quinn Mecham, Brigham Young University.

“No Victor, No Vanquished…or Delaying the Inevitable?” by Ian M. Hartshorn, University of Nevada, Reno.

“How do we contextualize Islamist organizations like Hezbollah“ by Rola el–Husseini, City University of New York.

Papers from previous workshops can be seen here: 2015 Islamism in the IS Age; 2014 Rethinking Islamist Politics.

Read Bayan Abubakr's piece "The Contradictions of Afro-Arab Solidarity(ies): The Aswan High Dam and the Erasure of the Global Black Experience" in POMEPS Studies 44! https://pomeps.org/the-contradictions-of-afro-arab-solidarityies-the-aswan-high-dam-and-the-erasure-of-the-global-black-experience

George Bajalia's paper draws on long-term ethnographic research in order to query the ways in which difference and belonging, and their markers, shift over time as migrants and immigrants “wait” in Tangier, Morocco. Check it out in POMEPS Studies 44! https://pomeps.org/waiting-and-working-shared-difference-and-labors-of-belonging-in-immigrant-tangier

Paul Silverstein discusses "The Racial Politics of the Amazigh Revival in North Africa and Beyond" in his piece in POMEPS Studies 44! Check it out here: https://pomeps.org/the-racial-politics-of-the-amazigh-revival-in-north-africa-and-beyond

POMEPS Studies 44 – Racial Formations in Africa and the Middle East: A Transregional Approach